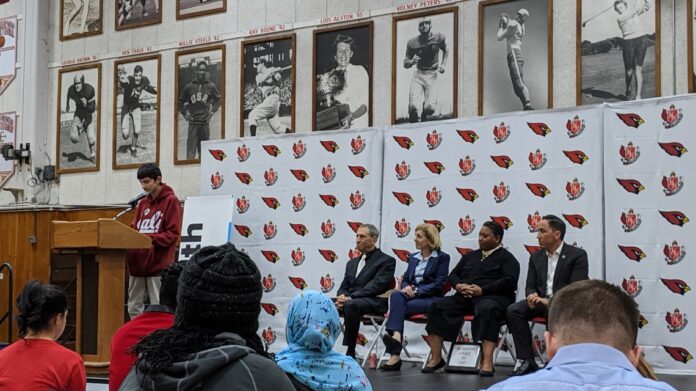 
Mayoral candidates Barbara Bry, Todd Gloria, and Tasha Williamson participated in a youth-led forum on Thursday, January 16, 2020, at Hoover High School. Students of Hoover High School’s Social Justice Academy in partnership with a San Diego nonprofit known as Youth Will hosted this annual debate where issues pertaining to San Diego youth were centered.
The candidates present were Councilmember Barbara Bry, Assemblymember Todd Gloria, 1963 mayoral candidate Rich Riel, and community activist Tasha Williamson. Health, homelessness, mobility, and other matters of justice were brought forward for the candidates to respond to in about sixty seconds. The questions were presented by the Hoover High students who had gone through training on community advocacy in preparation for this event and they effectively communicated their personal and collective experiences.

On the issue of mobility and the question of free transit and bike passes for low-income youth, Tasha Williamson spoke powerfully on the importance of constituents being put first as opposed to the current reality which involves police officers riding transit for free. If elected mayor, Williamson committed to having a conversation with MTS surrounding its excessive force treatment of minority youth on transit. As a community leader and activist, Williamson holds a strong anti-establishment position in the race for mayor. She has worked to support San Diego residents who have suffered the effects of gang or gun violence. With a history of fighting for accountability from those in various positions of influence, from police officers to teachers, Williamson’s campaign is clearly centered around working for Black and other marginalized folks. 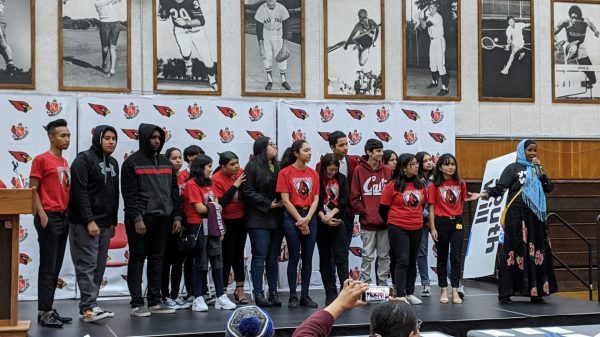 Todd Gloria pointed a lot to his past projects, both to the successes and to what he could have done better while in the various offices he has previously held. Gloria served as a San Diego Housing Commissioner from 2005 to 2008 and was elected to the San Diego City Council in 2008. He has improved roads, provided affordable housing units, and worked on results-oriented programs for the homeless population. As a gay man who identifies as Native American, Filipino, Puerto Rican, and Dutch, Gloria felt comfortable relating to the majority minority audience. One student spoke of her situation as a young immigrant struggling to figure out living in San Diego and he assured her of ways he could, if mayor, make it easier to make ends meet as a result of having a similar personal experience when he was younger.

Barbara Bry acknowledged her existence in the space as a white woman but expressed that having grandchildren growing up in this city urges her to make San Diego a great place to live for all. Bry’s campaign emphasizes that she is not a politician even as a San Diego City Council official and instead labels her as seeking to fix the problems she found with the government. Despite this, Bry, as well as Rich Riel, had a hard time connecting with the audience.

On the issue of transit, Riel’s spoke of his plan to shut off the buses after 6pm and issue out Uber/Lyft vouchers instead due to the lack of use of the buses at those times of the day. This showed an unfavorable stance on sustainability in terms of transportation and, more broadly, a lack of understanding of the climate crisis—a subject youth globally and locally have no choice but to be passionate and informed about. On homelessness, Bry mentioned that while not all of those without homes are there due to crime. Some of them, she said, have committed crimes and she remarked on the failing infrastructure in the Southeast that, “A city is only as strong as its weakest link.” Williamson used this opportunity to say that politicians also commit crimes and she encouraged the youth, saying that they come from strong and resilient communities, and should not be called weak. She stated that decriminalizing poverty would be a priority for her if elected because “people in survival mode do whatever they can to feed their kids.” 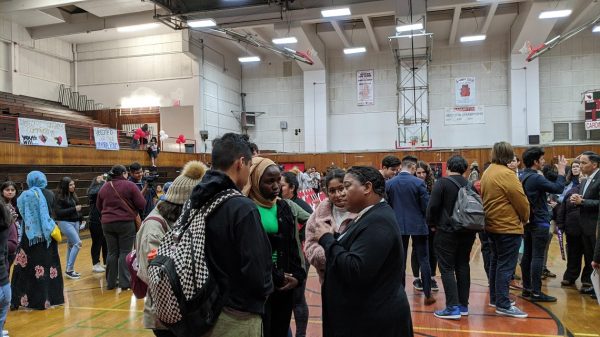 The last matter of the night was on the place of youth in decision-making in San Diego. A student asked the candidates their thoughts on dedicating seats to youth on the various boards and commissions that affect youth. Gloria pointed to his previous advocacy for youth voting rights on the planning committee in relation to the Mid-City Community Advocacy Network and added that he was supportive of youth being able to vote in elections at sixteen. Bry said she would be open to a youth advisory board. Williamson, on the other hand, said that there needed to be a move from seeing youth in advisory positions to seeing them as decision-makers.

After the general Q&A period, attendees of the forum were able to speak with the candidates one-on-one during breakout sessions.

Although Williamson and Gloria had the most support of those present, all candidates and their platforms reflected a complex San Diego that is distinctly different in the needs of its various communities and is in tension in how it will be represented.