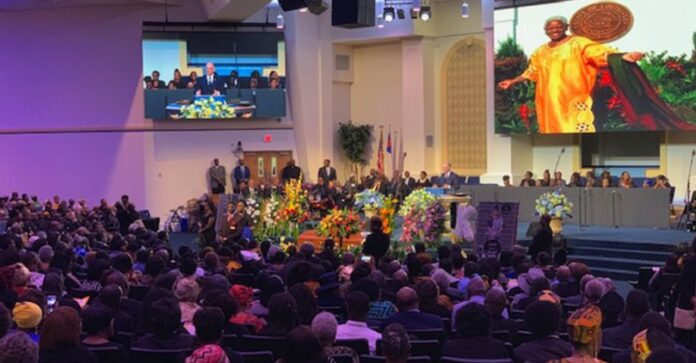 Hundreds honor Sadie Robert-Joseph, slain civil rights icon and museum founder who was remembered for living a life of purpose. Roberts-Joseph, the founder of the Baton Rouge African American History Museum formerly known as the Odell S. Williams Now and Then African American History Museum, was found dead in the trunk of her car on July 12. She was 75.

BATON ROUGE, LA (THE DRUM/NNPA) — Hundreds of people, including Louisiana Gov. John Bel Edwards, Baton Rouge Mayor Sharon Weston Broome, other elected officials, community leaders, and even residents who barely knew Sadie Roberts-Joseph filled the pews at Living Faith Christian Center to say goodbye to a woman who was remembered for living a life of purpose.

“What she has done has inspired me and all of us,” said Edwards. “That’s why we’re all here.”

The mother and grandmother who was affectionately known as “Ms. Sadie” was also a civil rights icon who hosted the city’s Juneteenth celebration. She was known for her dedication to bringing peace and unity to the community.

“She was a lady small in stature, but mighty in spirit,” the governor said. “I hope everyone will continue telling Ms. Sadie’s story. Let us never forget what Ms. Sadie stood for – education, love, and community. She was a leader in this community.”

“Sadie Roberts Joseph was a beacon of light in our community. She was the matriarch of our community,” said Mayor Broome. “She lived a life of purpose. She was a woman on a mission.”

People from all walks of life came to pay their final respects. Big spray flowers and a quilt that had been donated by a man in Arkansas flanked her wooden casket as her big family (she was one of 12 siblings) and others looked on.

Many who came barely knew her but admired her spirit and dedication.

“I had met Ms. Sadie maybe one time, but I just felt like I needed to show my support,” said Patricia Francois. “I liked what she was doing for people. She was trying to help everybody.”

Roberts-Joseph also received several proclamations from everyone from the governor to the mayor to state representatives and U.S. Congressman Cedric Richmond.

Her nephews remembered their aunt as someone who was curious about life and asked a lot of questions. She was also the one in the family who didn’t have a lot of rhythm, they joked – someone who marched to the beat of her drum.

“She lived a life offbeat, but on purpose,” said her nephew the Rev. Shalamar Armstrong.

Community leaders promised to continue to support the efforts started by Ms. Sadie. They urged those in attendance to do the same.

On July 16, Baton Rouge police arrested Ronn Bell, 38, Robert-Joseph’s tenant, and charged him with first degree murder. They say Bell was $1, 200 behind on his rent.