Music tends to bring people together in a way that few other things can, and the Ira Aldridge Repertory Players (IARP) put on a sensational premier show at the Educational Cultural Complex (ECC) on Thursday, March 7 displaying just how music can bridge the generational gap in the community.

Founded by Calvin Manson in 1984, the IARP is a community based theatre company whose mission is to “touch lives with the power of theatre, by telling stories that portray the flavor and circumstances of the African American community and issues that impact all humanity,” according to Manson, who is also IARP’s artistic director.

Dancin’ in the Street was an idea conceived and directed by both Manson and Eric Overstreet, and is being dedicated to Overstreet’s mother, Mrs. Minnie C. Overstreet, who passed away on March 3. According to the show’s pamphlet, “Dancin’ in the Street is a tribute to Soul Music that ignites images and remembrances of a musical era gone by when music and lyrics told stories, shared feelings, and touched lives in a very special way.” And the production did exactly that.
Hosted by the ever-funny Galaxy Glen, the show was a blending of past and present generations, exhibiting songs from their respective times, such as Marvin Gaye’s “What’s Going On,” Sam Cooke’s “A Change Is Gonna Come,” Aaliyah’s “Are you That Somebody,” and Lil’ John’s “Turn Down for What,” through spectacular dance moves, and even a singing contest where audience members were asked to judge seven “contestants” on their performance. 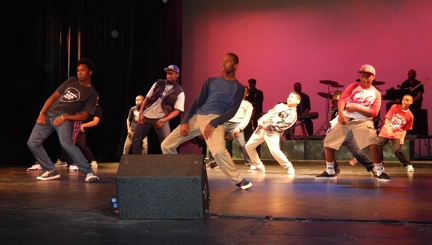 In addition to the fantastic song and dance demonstrations, there were equally amazing sets by the Teya Sa Thiosanne Africa Drum Dance Company, and the Thunder Squad; one of whose members, Jordan Humphries, was presented by the men of Phi Beta Sigma with a $500 scholarship to Berklee School of Music Summer Program. It was a great way to end an already extraordinary night. Whoever shall see this play will not be disappointed.

Dancin’ in the Street will continue to run Friday through Sunday until March 23. Visit www.iarpplayers.org for times and ticket information.