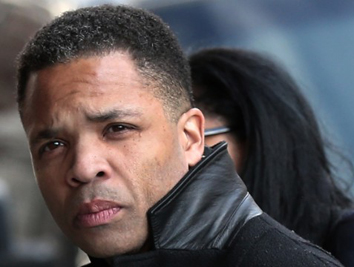 WASHINGTON (NNPA) – After openly weeping and apologizing for his behavior, former U.S. Rep. Jesse L. Jackson, Jr. was sentenced to 2 ½ years in federal prison on Wednesday for using $750,000 in campaign funds for personal use.

“Your honor, throughout this process, I’ve asked the government and the court to hold me and only me accountable for my actions,” Jackson told U.S. District Judge Amy Berman Jackson. He said, “I am the example for the whole Congress. I understand that. I didn’t separate my personal life from my political activities, and I couldn’t have been more wrong.”

He also said, “I misled the American people, I misled the House of Representatives.” Dabbing his eyes with tissues, he said, “I was wrong and I do not fault anyone.”

As the younger Jackson delivered his statement, his father, Jesse Jackson, Sr., sat in the first row listening as tears ran down his cheeks and his mother, Jacqueline, also crying, donned sunglasses for much of the proceedings.

“I also want to apologize to my dad and to my mother,” Jackson, Jr. said. His parents and siblings attended the proceedings.

Jackson’s wife, Sandra, a former Chicago alderwoman, was sentenced to a year in prison and will have to serve all 12 months. She must also repay $22,000 taken from her own campaign account for alderwoman.

The former congressman must for prison on Nov. 1 or shortly thereafter. Based on time off for good behavior, Jackson, Jr. could be released after completing 25.5 months. In addition, he must perform 500 hours of community service.

Because the couple has two children, aged 13 and 9, they will serve time consecutively, with the husband entering prison first. Prosecutors had asked that Jackson Jr. be sentenced to four years in prison and his wife 18 months.

The judge  acknowledged that in the past lawmakers, were  more loose with the use of campaign funds, but Jackson’s actions far exceeded even those limits.

“There may be blurred lines for Congress to follow when their lives are political, this case did not come near those areas,” she told Jackson, Jr., who represented Chicago’s South Side for 17 years. “This was a knowing, organized joint misconduct that was repeated over many years.”

Jackson, Jr., once a rising political star and the oldest son of civil rights leader Jesse L. Jackson, Sr., pleaded guilty last February to conspiracy, making false statements, mail fraud and wire fraud. His wife Sandra was charged with filing false tax returns. She will also have to perform 200 hours of community service and pay restitution of $22,000, the amount she took from her alderman’s campaign for personal use.

According to the federal information filed in federal court, Jackson knowingly misspent campaign funds from about August 2005 through July 2012. It said Jackson and his wife conspired to “enrich themselves by engaging in a conspiracy and a scheme to defraud in which they used funds donated to the Campaign for their own personal benefit.”

However, Matt Graves, an assistant U.S. attorney, called Jackson’s crimes “staggering.” He noted that the couple had earned nearly $350,000 in 2011.

Graves spoke of Jackson being “wasted talent” who had participated in one of the largest violations of federal campaign laws. Graves even belittled Jackson’s bipolar disorder, saying there was no medical evidence presented in court to support that claim.

The judge agreed, noting that there was evidence to show that the purchases were made during a bipolar episode and that none of the extravagant items were returned. The judge called evidence provided to support the defense’s bipolar disorder claim “thin.”

When it was her turn, Sandra “Sandi” Jackson said, “I am a little nervous, so I have a written statement that I would like to read to you.”

She said, I want to begin by apologizing first to my family, to my friends, my community and my constituents for actions that brought me here today. ..My heart breaks every day with the pain this has caused my babies.”

But the judge reminded her, “It’s not the government that put your children in this position.”

She recommended assigning the former congressman to a minimum-security federal prison camp in Montgomery, Ala., or a low-security facility in Butner, N.C., near Raleigh, N.C., where white-collar criminal Bernie Madoff is housed. Both institutions made Forbes magazine top 10 list in 2009 of the nation’s cushiest federal prisons.

The judge recommended that Sandra Jackson be sent to a similar facility in Florida. However, the Bureau of Prisons will make the final decision. Sandra Jackson must report to prison within 30 days of her husband’s release.

“The judge rendered a sentence that we’re satisfied was fair,” said Weingarten after learning Jackson’s fate. “The system worked well.”

Weingarten continued: “We fully believe that our client, Jesse Jackson, Jr. is going to have another important chapter in his life. He will come back out, and we believe, that he will do great things.”

In court, Jackson, Jr. said he hoped his wife can earn enough money to support the family while he is prison.

“”When I get back, I’ll take on that burden,” he said. “By then, I hope my children will be old enough that the pain I caused will be easier to bear.”