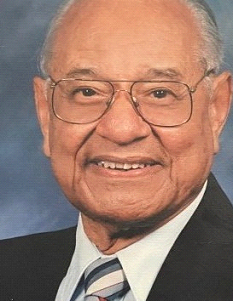 Funeral services were held January 10, 2022, at Our Redeemer Lutheran Church with the burial following at Miramar National Park Cemetery. Final arrangements were entrusted to Anderson-Ragsdale Mortuary.

Known to all as “Andrew”, as a youth, he benefited from instruction by school teachers at Valena C. Jones Elementary, Albert Wickre Jr. High, and McDonogh High School. Andrew was accepted to Dillard University in New Orleans, Louisiana.  Immediately following his freshman year at Dillard, military service called him to duty.

Andrew enlisted in the United States Army and served in the 452nd Battalion as an Anti-Aircraft Artillery Sergeant.  After service to the country, Andrew was honorably discharged.

He met and married Lolita Gonzales and from this union was born a son, Blaise Seraile.

Andrew briefly studied at Howard University and Wayne State University.  While living in Michigan, he was employed as an Inspector of Public Construction for the City of Detroit.  Returning to Dillard University after a 12-year absence, Andrew earned his Bachelor of Arts degree with majors in mathematics and chemistry in 1961.  His first employment was as a Specialties Chemist, then as a writer and editor at the Department of Agriculture.

He was the first African-American Computer Engineer at Tulane University’s Biomedical Computer Center.  After Tulane, Andrew relocated to California and was hired by the Los Angeles School Board. He returned to the tech field and worked for GTE telephone, several aerospace companies as a programmer-analyst, a systems analyst, database administrator, and systems administrator.

Later in life, Andrew married Bennye Kate Whitfield and relocated to San Diego, California.    Andrew enrolled in a three-year postgraduate program through Christ College Irvine (now Concordia West) where he was commissioned a diaconate minister in Pastoral Service to the Lutheran Church Missouri Synod in Southern California and was ordained non-denominationally. Redeemer Lutheran Church commissioned Andrew for service until his retirement from ministry in 2001.

On Christmas Eve, Andrew passed into eternity, peacefully at home in the care of his devoted wife.  He leaves a host of relatives and friends, including nieces and nephews, his wife of nearly 36 years, Bennye Kate Whitfield Seraile, his son, Blaise, stepdaughters Dr. Kimberly J. Bogan (Willie) and Dr. Helen V. Griffith (Stanley), and his brother, Elmore, to cherish his memory.

Andrew’s three brothers, Leonard, Raymond, and Mervyn, all preceded him in death.  We are thankful that God has been our help in ages past and our hope for years to come.