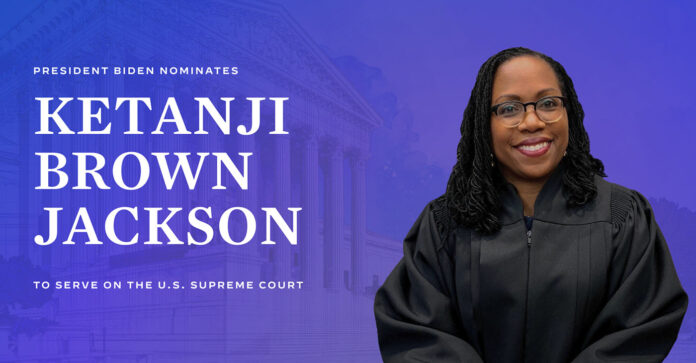 The final tally of 53-47 included GOP Sens. Mitt Romney of Utah, Susan Collins of Maine, and Lisa Murkowski of Alaska.

Senate Judiciary Committee Chair Dick Durbin, a Democrat from Illinois, said out loud on Monday what many may have thought about the Supreme Court nomination hearings where Republicans verbally lynched Judge Ketanji Brown Jackson.

“Judge Jackson is a better person than me,” Durbin announced.

As the committee advanced Jackson’s nomination and, with three Republicans announcing their support for the judge, it’s all but assured that a Black woman will sit for the first time on the highest court in the land.

The final tally of 53-47 included GOP Sens. Mitt Romney of Utah, Susan Collins of Maine, and Lisa Murkowski of Alaska.

“My support rests on Judge Jackson’s qualifications, which no one questions; her demonstrated judicial independence; her demeanor and temperament; and the important perspective she would bring to the court as a replacement for Justice [Stephen] Breyer,” Murkowski said.

“She will bring to the Supreme Court a range of experience from the courtroom that few can match given her background in litigation.”

On Twitter, Romney announced that Jackson is a “well-qualified jurist and a person of honor” who “more than meets the standard of excellence and integrity.”

The most recent committee hearing appeared headed on a spiral toward earlier confirmation sessions when Republican Lindsey Graham of South Carolina, who three times had voted to confirm Jackson to other seats, spewed more venom.

“[Jackson] is embraced by the most radical people in the Democratic movement to the exclusion of everybody else,” Graham spouted.

He also referred to Jackson as an “activist” judge, noting that if the GOP controlled the Senate, she would already have been voted down.

“If we get back the Senate and we are in charge of this body, and there [are] judicial openings, we will talk to our colleagues on the other side, but she would not have been before this committee if we were in charge,” Graham railed.

However, Durbin praised the nominee’s restraint in the face of unhinged GOP senators who many suggested posed questions that bordered on being racist and obscene.

“She stayed calm and collected, showed dignity, grace, and poise. It is unfortunate that some moments in our hearing came to that. But if there’s one positive to take away from these attacks on her, it is that the nation saw the temperament of a good strong person ready to serve on the highest court in the land,” Durbin asserted.

As most observers speculated, the Senate Judiciary Committee split down the middle, voting 11-11 along party lines on Jackson’s Supreme Court nomination.

But even that came with some hiccups.

Traveling from California on the same flight as the troubled passenger, Padilla didn’t show up until late Monday.

Unlike other ballots cast in the Senate, only dissenting votes are allowed when attempting to advance a nominee out of committee.

D.C. Congresswoman Eleanor Holmes Norton said while the vote to advance and ultimately confirm Jackson “is historic,” there’s still some emptiness for the District of Columbia.

“D.C., as with every other SCOTUS nominee in history, will have no vote on confirmation even though D.C. and its residents are bound by the court’s rulings,” Norton stated.

Still, Jackson’s confirmation remains on pace for a dramatic conclusion either on April 7 or 8.

“We applaud the Senate Judiciary Committee for taking a critical step towards a U.S. Supreme Court that represents our communities and fulfills the promise of equal justice under law,” Wade Henderson, the CEO of the Leadership Conference on Civil and Human Rights, remarked.

“At her hearing, Judge Jackson showed the nation why she will be a justice for all — her years of experience as an even-handed jurist, her brilliance and passion for the law, and her commitment to fairness and to upholding the constitutional rights of all,” Henderson said.

“In the face of dishonest attacks and shameful attempts to derail her nomination, Judge Jackson demonstrated her thoughtful judicial temperament and perseverance. She is ready to serve on our highest court, and we call on the full Senate to confirm this distinguished and highly qualified nominee immediately.”

“It appears now that the U.S. Senate will do the right thing at the right time with the confirmation of Judge Jackson at a time in our nation where the racial divide has not been closed. Having Judge Jackson on the Supreme Court will at least give Black Americans and other communities of color a strong voice for fairness and equal justice.”

Michelle Obama plans 6-city tour for ‘The Light We Carry’

Study tries to see if child vaccines and asthma are linked