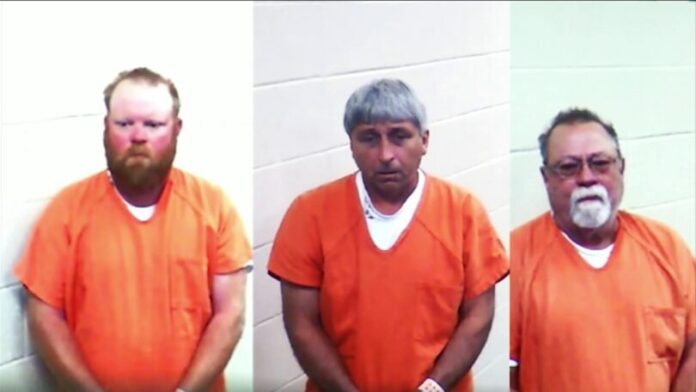 The family of Ahmaud Arbery has lashed out at a plea agreement prosecutors sent to a judge this week that may allow Gregory and Travis McMichael to serve their sentences in federal prison.

The father and son duo convicted in Arbery’s killing reportedly has agreed to serve at least 30 years in what many believe is a more inmate-friendly federal lockup. Arbery’s family wants the convicts to serve time in the harsher conditions of a state prison.

“The United States Department of Justice has gone behind my back to offer the men who murdered my son a deal to make their time in prison easier for them to serve,” Cooper-Jones said in a statement.

“I have made it clear at every possible moment that I do not agree to offer these men a plea deal of any kind. I have been completely betrayed by the DOJ lawyers,” Cooper-Jones asserted.

Merritt referred to federal prison as “a country club compared to state prison.”

He said federal prisons are less populated, have better funding, and are “generally more accommodating” than state lockups. The McMichaels received life sentences without the possibility for parole in a Glynn County, Georgia, court for murdering Arbery.

A third man, William “Roddy” Bryan, also was convicted but wasn’t listed in the latest plea deal. On Saturday, January 29, prosecutors sent the plea agreement to the US District for the Southern District of Georgia for consideration.

“By admitting they were motivated by hate when they hunted and murdered Ahmaud Arbery, these men get to transfer to safer, less crowded, and more orderly federal detention facilities,” Merritt stated.

“In essence, they get to brag about their hatred publicly and then be rewarded by the federal government.”

“This is an example of the Department of Justice literally snatching defeat from the jaws of victory,” he said.

US District Judge Lisa G. Wood rejected the plea deal reached by prosecutors and Travis McMichael on federal hate crime charges in the murder of Ahmaud Arbery. The deal would have allowed McMichael to serve his sentence in federal prison

“We respect the court’s decision to not accept the sentencing terms of the proposed plea and to continue the hearing until Friday, Assistant Attorney General Kristen Clarke for the Civil Rights Division said in a statement.

“The Justice Department takes seriously its obligation to confer with the Arbery family and their lawyers both pursuant to the Crime Victim Rights Act and out of respect for the victim,” Clark said.

“The Justice Department entered the plea agreement only after the victims’ attorneys informed me that the family was not opposed to it,” she said.

Earlier, McMichael had agreed to plead guilty to a single hate crime charge in exchange for the prosecution recommending he serve 30 years in federal prison. Gregory and Travis McMichael, along with William “Roddie” Bryan were convicted in state court of murder in early January.

“Please listen to me,” Cooper-Jones told the judge. “Granting these men their preferred conditions of confinement would defeat me. It gives them one last chance to spit in my face after murdering my son.”


‘Southern Hospitality’ Doesn’t Always Apply to Black People, as Revealed in the Killing of Ahmaud Arbery

Arbery killers get life in prison; no parole for father, son