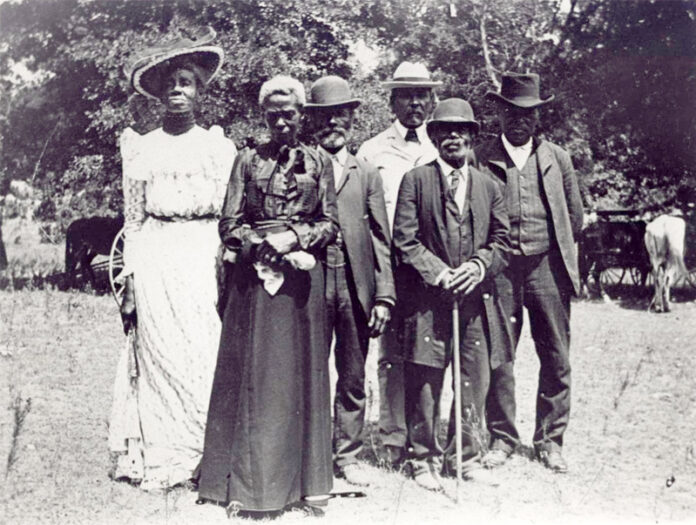 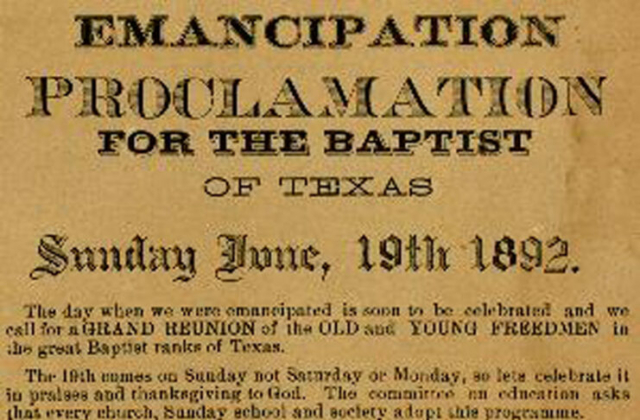 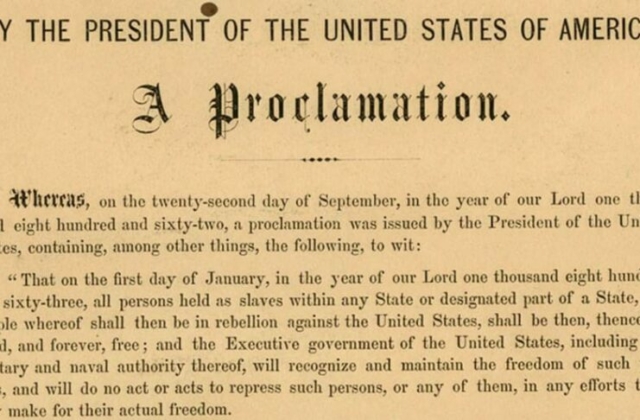 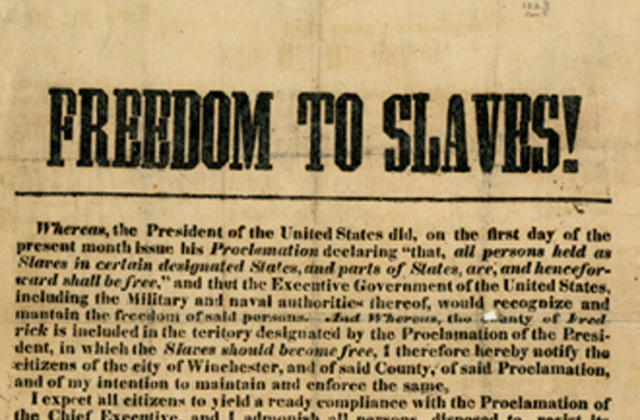 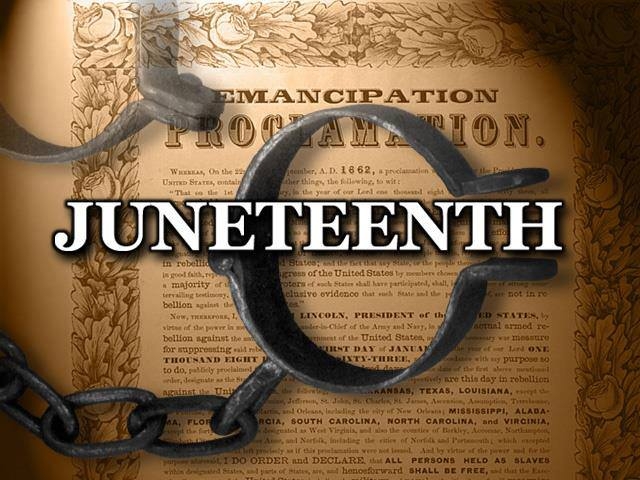 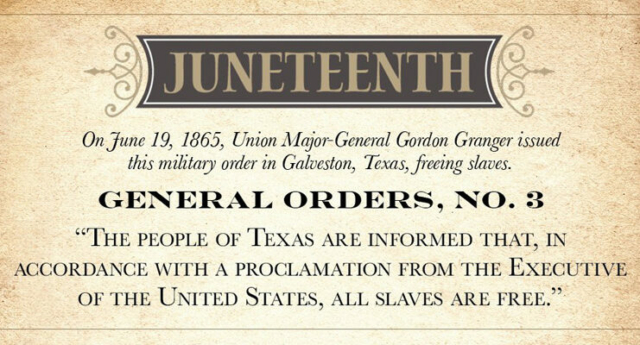 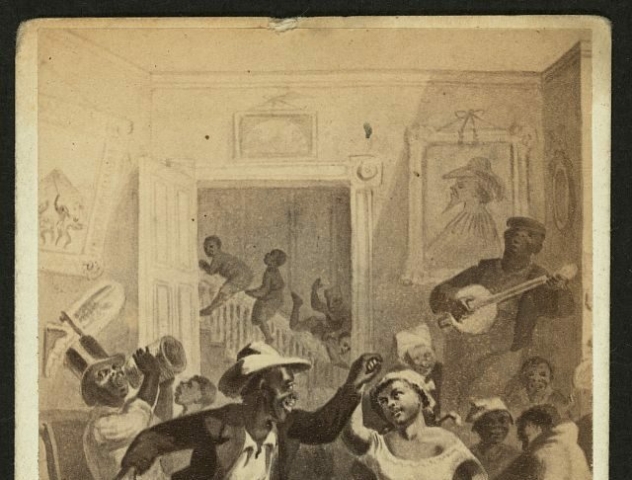 The following is the story of Juneteenth, a day of celebration in African American communities across the country. The following is the development of that Independence Day for Black people starting in the state of Texas. It is reprinted here so that we may continue to understand this very special part of our history:

Juneteenth, also known as Juneteenth Independence Day or Freedom Day, is an American holiday that commemorates the June 19, 1865 announcement of the abolition of slavery in the U.S. state of Texas, and more generally the emancipation of enslaved African Americans throughout the former Confederate States of America. Its name is a portmanteau of “June” and “nineteenth”, the date of its celebration. Juneteenth is recognized as a state holiday or special day of observance in forty-five states.

Today it is observed primarily in local celebrations. Traditions include public readings of the Emancipation Proclamation, singing traditional songs such as “Swing Low, Sweet Chariot” and “Lift Every Voice and Sing”, and readings of works by noted African- American writers such as Ralph Ellison and Maya Angelou. Celebrations may include rodeos, street fairs, cookouts, family reunions, park parties, historical reenactments, or Miss Juneteenth contests. The Mascogos, descendants of Black Seminoles, of Coahuila, Mexico also celebrates Juneteenth.

During the American Civil War, President Abraham Lincoln issued the Emancipation Proclamation on September 22, 1862, with an effective date of January 1, 1863. It declared that all enslaved persons in the Confederate States of America in rebellion and not in Union hands were to be freed. This excluded the five states known later as border states, which were the four “slave states” not in rebellion – Kentucky, Maryland, Delaware, and Missouri – and those counties of Virginia soon to form the state of West Virginia, and also the three zones under Union occupation: the state of Tennessee, lower Louisiana, and Southeast Virginia.

More isolated geographically, Texas was not a battleground, and thus the people held there as slaves were not affected by the Emancipation Proclamation unless they escaped. Planters and other slaveholders had migrated into Texas from eastern states to escape the fighting, and many brought enslaved people with them, increasing by the thousands the enslaved population in the state at the end of the Civil War. Although most enslaved people lived in rural areas, more than 1000 resided in both Galveston and Houston by 1860, with several hundred in other large towns. By 1865, there were an estimated 250,000 enslaved people in Texas.The older, and Hispanic, town of San Antonio had 168 slaves among a population of 3,436.

The news of General Robert E. Lee’s surrender on April 9 reached Texas later in the month. The Army of the Trans-Mississippi did not surrender until June 2. On June 18, Union Army General Gordon Granger arrived at Galveston Island with 2,000 federal troops to occupy Texas on behalf of the federal government. The following day, standing on the balcony of Galveston’s Ashton Villa, Granger read aloud the contents of “General Order No. 3”, announcing the total emancipation of those held as slaves:


The people of Texas are informed that, in accordance with a proclamation from the Executive of the United States, all slaves are free. This involves an absolute equality of personal rights and rights of property between former masters and slaves, and the connection heretofore existing between them becomes that between employer and hired labor. The freedmen are advised to remain quietly at their present homes and work for wages. They are informed that they will not be allowed to collect at military posts and that they will not be supported in idleness either there or elsewhere.

Formerly enslaved people in Galveston rejoiced in the streets after the announcement, although in the years afterward, many struggled to work through the changes, against resistance of whites. The following year, freedmen organized the first of what became the annual celebration of Juneteenth in Texas. In some cities African-Americans were barred from using public parks because of state-sponsored segregation of facilities. Across parts of Texas, freed people pooled their funds to purchase land to hold their celebrations, such as Houston’s Emancipation Park, Mexia’s Booker T. Washington Park, and Emancipation Park in Austin.

Although the date is sometimes referred to as the “traditional end of slavery in Texas” it was given legal status in a series of Texas Supreme Court decisions between 1868 and 1874.

In the early 20th century, economic and political forces led to a decline in Juneteenth celebrations. From 1890 to 1908, Texas and all former Confederate states passed new constitutions or amendments that effectively disenfranchised black people, excluding them from the political process. White-dominated state legislatures passed Jim Crow laws imposing second-class status. The Great Depression forced many black people off farms and into the cities to find work. In these urban environments, African Americans had difficulty taking the day off to celebrate. The Second Great Migration began during World War II, when many black people migrated to the West Coast where skilled jobs in the defense industry were opening up. From 1940 through 1970, in the second wave of the Great Migration, more than 5 million black people left Texas, Louisiana and other parts of the South for the North and West Coast. As historian Isabel Wilkerson writes, “The people from Texas took Juneteenth Day to Los Angeles, Oakland, Seattle, and other places they went.”

Following the 1968 Poor People’s Campaign to Washington, DC called by Rev. Ralph Abernathy, many attendees returned home and initiated Juneteenth celebrations in areas where the “Day” was not previously celebrated.

Since the 1980s and 1990s, the holiday has been more widely celebrated among African-American communities. In 1994 a group of community leaders gathered at Christian Unity Baptist Church in New Orleans, Louisiana to work for greater national celebration of Juneteenth. Expatriates have celebrated it in cities abroad, such as Paris. Some US military bases in other countries sponsor celebrations, in addition to those of private groups.

Although the holiday is still mostly unknown outside African-American communities, it has gained mainstream awareness through depictions in entertainment media, such as episodes of the TV series Atlanta (2016) and Blackish (2017), the latter of which featured musical numbers about the holiday by Aloe Blacc, The Roots, and Fonzworth Bentley.

In 1980, Texas was the first state to establish Juneteenth as a state holiday under legislation introduced by freshman Democratic State Representative Al Edwards. Juneteenth is a “partial staffing” holiday in Texas; government offices do not close but agencies may operate with reduced staff, and employees may either celebrate this holiday or substitute it with one of four “optional holidays” recognized by Texas.

By 2008, nearly half of US states observed the holiday as a ceremonial observance. To date, 46 of the 50 states and the District of Columbia have recognized Juneteenth as a state holiday or a day of observance. Hawaii, Montana, North Dakota, and South Dakota are the only states that refuse to show respect for the free labor and horrific treatment of our ancestors. The free labor of our ancestors paved the way for the United States of America to be one of the wealthiest countries in the world.

Portions of this article originally appeared in African American Voice