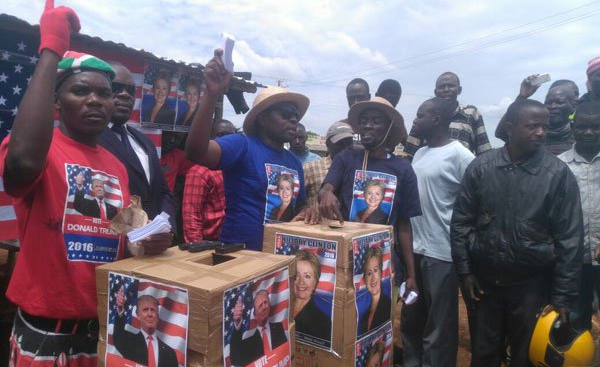 Hundreds of Kogelo residents on Tuesday held a mock US election in solidarity with American voters at Nyang’oma market, Siaya County.

They patiently queued to cast their votes for Democratic candidate Hillary Clinton and her Republican rival Donald Trump, candidates they have never met in person, much less knowing them.

But conspicuously missing in action was Mama Sarah Obama, US President Barack Obama’s step grandmother who said she was “not ready”.

Also missing was Mr Malik, President Obama’s half brother who threw his weight behind Mr Trump.

Organisers of the event, Big-Time Comedians, said said they would forward the results to the United States to help choose the successor of President Obama (sic).

Voters who supported Mrs Clinton’s bid said she is humble, popular and motherly, compared to Mr Trump who they described as “arrogant and egoistic”.

“Trump is doomed to lose because he has been in the fore-front of intimidating his supporters by uttering provocative statements,” said Kevin Rajula, 45.

“We are even scared that he will depot all Muslims from the country if he is chosen.”

Mrs Clinton, they said, will also complete the development projects initiated or influenced by President Obama in Kogelo.

“Through his grandmother, we have been able to educate our children. The president has also started a school called Senator Barrack Obama, and widows in this region are taken care of because of him,” said Mr Martin Ouma.

“We hope that when Clinton gets to power, being his favourite candidate, she will continue with his projects.”

After taking power, he said, President Obama helped transform the once sleepy village to become one of popular towns in Kenya.

Mr Agiga Kevin, 23, said the Obama presidency had seen the construction of schools such as Senator Barrack Obama Primary and secondary schools and renovation of Kogello Dispensary.

Mr Agiga said the lighting up of the village and setting up of Kogello Police Station, thanks to President Obama’s influence, had made Kogelo secure.

Mr Maurice Odero, family friend of Mama Sarah, said by casting his mock vote for Mrs Clinton, he had made his brother proud.

“We are not going to accept those who are going against his words,” he said in reference to Mr Malik, “we have agreed that it is Hillary Clinton who is going to succeed our brother”.

The local community considers the likes of Mr Malik “outcasts”, he said.

“Which grudge can make you go against everything that your brother does yet as a person you have not brought any change to the community?” he said.

“It is very unfortunate that Malik had to betray him in such a manner.”

As Kogelo residents, he said, they were very happy that President Barrack Obama had never responded to his Mr Malik’s comments and actions like travelling to the US for Mr Trumps’ convention and eventually voting for him.

“He is such a wise man. Such small things can never move him,” said Mr Okelo.

Mr Malik has been on the record declaring his support for Mr Trump.

He accused President Obama of having failed to bring development in Kenya during his eight-year stay in office.

He described Trump as a visionary leader who will help transform the economy of the US.

“Trump is a down-to-earth person, he also approaches issues directly and does not mince his words. Being a candidate of the Republican Party, I support his candidature,” said Mr Malik.

Mr Lawrence Oyange, one of the organisers of the event, said they conducted the mock polls to show the close relationship Kenyans have with the Americans.

“We have done this since 2008 when our son Obama vied for presidency,” said Mr Oyange, “Kogello is considered a swing state in America and the result of the vote are a reflection of the US people.”