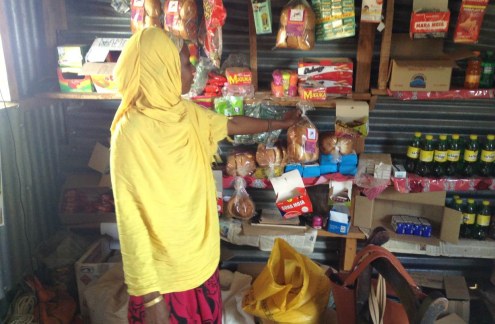 Marsabit — Widow Ahatho Turuga lost 20 of her goats to drought early last year, but the shopkeeper is planning to reinvest in her herd once she has saved enough money.

“I think I will start with four goats and see how it goes,” she said, rearranging soap on the upper shelf of her shop in Loglogo, a few kilometres from Marsabit town.

She recalled how frequent droughts had left her on the edge of desperation, struggling to care for six of her own children and four others she adopted after their mother died.

But Turuga is finding it easier to cope since taking part in a rural entrepreneurship programme run by The BOMA Project, a non-profit helping women in Kenya’s dry northern areas beat extreme poverty and adapt to climate change.

The U.S. and Kenya-based organisation provides two years of business and life-skills training, as well as mentorship.

After graduating, they carry on operating their businesses – mainly small shops selling groceries and household goods – either together or on their own.

The women also club together in savings groups of at least 15 people, who put away anything from 400 shillings a month each, and make loans to members at an interest rate of 5 to 10 percent.

Habibo Osman, a mother of five who was in the same group as Turuga, has been able to support her family even after divorcing her husband.

The 1,200 shillings she earns each week from the shop she established as a BOMA business has enabled her to enroll her eldest child, aged five, in nursery school. She is now hoping to save enough to buy her own land.

Ahmed “Kura” Omar, BOMA’s co-founder and deputy country director, said his native Marsabit is one of Kenya’s driest counties. It is often hit by prolonged drought, with many families losing livestock in its mainly pastoralist economy, he added.

“Given that there is no foreseeable end to these drought patterns, we need to stop relying on food distribution and aid money, and create more sustainable, life-long solutions,” Kura told the Thomson Reuters Foundation.

BOMA CEO Kathleen Colson said the programme aimed to help break the cycle of dependency on aid, giving women power over their lives and the means to move out of extreme poverty.

“People need to be treated with dignity and be empowered to achieve self-sufficiency and effect change on a community level,” she said.

BOMA asks villagers to help identify the poorest women among them to participate in the training. After completing the programme, they help other women, a process that raises income levels across the entire area.

Bakayo Nahiro, a widow and mother of six, belongs to the Namayana women’s saving group in Kargi in Marsabit. She has amassed 25,000 shillings in savings, but said profit margins go down in drought periods as people take shop goods on credit when they have no livestock to sell.