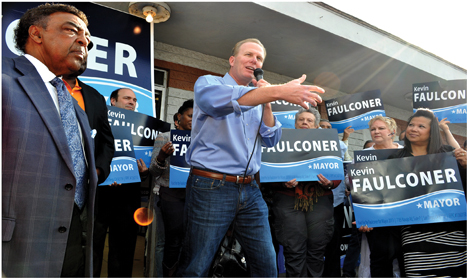 In Kevin Faulconer’s words, San Diego’s mayoral race is “a sprint, not a marathon.” With just under five weeks left until the City votes for its next mayor, the candidates are upping the ante in their efforts to reach the community. Republican candidate Kevin Faulconer is running against Democratic candidate David Alvarez. Last Friday, Faulconer held a special invite for media at his new campaign office location in the heart of San Diego’s Fourth Council District on Logan Ave, where he answered questions openly and offered his platform on key issues. He then followed the invite with a grand opening Saturday morning where a large community supporting gathered.

Mr. Faulconer appeared relaxed, but genuinely concerned for the community in which he campaigns to serve. Setting up shop at the corner of Logan Ave and Euclid Ave was strategic and purposeful for Faulconer. And according to many supporters in the African American community including Pastor Rickey T. Laster, Faulconer has a long history of supporting this community.

Faulconer’s campaign focuses on improving infrastructure in underserved neighborhoods, mainly the Fourth Council District. But he also lobbies for a stronger police force, improved job opportunities in the contracting arena for African Americans, and a strengthening of the small business sector – of which he refers to as “the backbone of San Diego’s economy.”

Faulconer expressed a desire to strengthen collaboration among different groups in San Diego. And in this vein spoke to his commitment to reach out to the African refugee community here. San Diego is home to one of the largest refugee populations in the nation, however many newly resettled refugees here feel very disconnected. To this end, Faulconer pledges to go into these communities and bridge the gap.

Saturday morning’s grand opening drew a fairly large crowd, and hosted some of San Diego’s prominent African American leaders, including Rev. George Walker Smith, who stated this was the “first time I’ve seen something like this happen in my community.”

Faulconer’s new headquarters are located at 5067 Logan Ave, San Diego, CA 92113. His campaign stresses inclusiveness, revitalization, outreach and collaboration, and how bringing all of these pieces together into a collective unit will ultimately improve the city of San Diego.

The runoff election will take place on Tuesday, February 11.