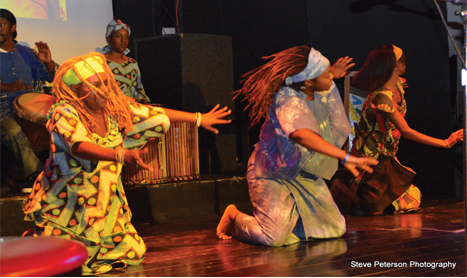 The World Beat Cultural Center (Executive Director/Founder Makeda “Dread” Cheatom) celebrated its 33rd annual Kwanzaa celebration from December 26 to December 30, 2013 at their center located at 2100 Park Blvd here in San Diego. This particular year The World Beat Center also celebrated the life and legacy of Nelson Mandela (1918-2013). This was a free event, and each day featured Traditional Afrikan libations, a drum call and the master of ceremonies was Tukufu Kalonji.

Celebrating 5 of the 7 days of Kwanzaa, The World Beat Center had Kwanzaa Poetry by Johnnierenee Nia Nelson, a preview of “Sarafina”, the musical. The initiation of their new murals: the Ancient Egyptian Dendera Calendar, the Egyptian Goddess Nut and a lecture on Solar Biology presented by Dr A.J. Varmah and performances by Makida Dance Troop and Sene Africa.

Though many Americans don’t know much about Kwanzaa, it’s a beautiful holiday that all can share in. Here is a little history about this important celebration of African heritage and unity.

Kwanzaa is celebrated from December 26 through January 1st. Established by Maulana Karenga in 1966, Kwanzaa is a holiday that honors African heritage and celebrates family, community, and culture. It takes its name from the phrase “matunda ya kwanza,” which in Swahili means “first fruits.” Kwanzaa’s origin lies in the 1960s civil rights and Black Freedom movements, and is a way of commemorating the African heritage of black Americans whose ethnic history was stripped away by the slave trade. Swahili is the most widely spoken African language, and was thus chosen as the language of Kwanzaa’s principles.

According to Karenga, “Kwanzaa was created to reaffirm and restore our rootedness in African culture.” It is a cultural rather than religious holiday, and can be celebrated regardless of a person’s faith tradition. “First fruits” celebrations date back to ancient Egypt and Nubia, and commemorate the harvest.

The colors black, red, and green are part of Kwanzaa celebrations due to their special significance. Black represents the people, red is for the blood uniting all those with African ancestry, as well as the bloodshed during slavery and the civil rights movement, and green is for the lush land of Africa.
There are seven principles of Kwanzaa, celebrated on each day of the holiday and known collectively as Nguzo Saba. They are African values which are named in both Swahili and English.

Families gather during Kwanzaa to light the kinara, a candle holder with seven candles in the colors of red, black, and green. The black candle is placed in the center and used to light the other flames from left to right. Together, the candles are called the mishuuma saba, and they represent the Seven Principles.

Kwanzaa greetings are in Swahili and English. “Habari gani?” is a traditional Swahili greeting, and the response is each of the principles, depending on which day of Kwanzaa it is. Other greetings include “Heri za Kwanzaa,” or simply, “Happy Kwanzaa!”

If you are interested in donating, volunteering or just want more information on The World Beat Cultural Center and their various activities go to www.worldbeatcenter.org or call (619) 230-1190.