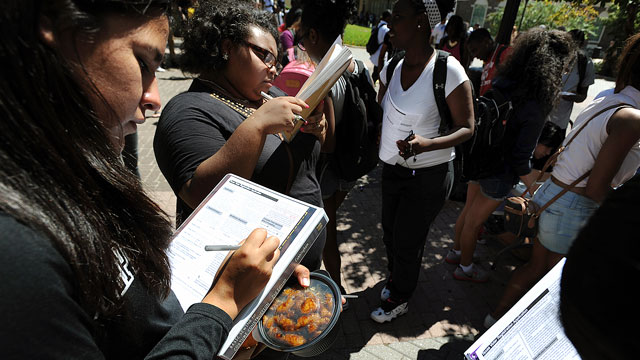 It has already been established that Black people have suffered and died for the right to vote; that the Voting Rights Act of 1964 was necessary to ensure our right to vote; and that because of our use of the vote, we have not only increased the number of Black elected officials at all levels of government around the nation, but we have elected the first African American President of these United States, not once, but twice.

Now we have an opportunity to make history again by individually casting our votes not only for the next President of the United States, but also State and Local officials running for office as well as for the many Propositions and Initiatives on all ballots. None of this will matter to you if you are not already registered to vote or if not, if you don’t register between now and midnight on October 24th, which is the last day one can register to vote for the November election.

If you have moved, married, divorced or changed you name legally since the last time you voted, then you need to register again and get that ballot in the mail immediately. If when you go to vote on November 8th and they cannot find you name, you have the right to cast a “challenged ballot,” which will be examined and verified after the election, and counted if your information is found to be correct.

If you are a convicted felon who has served your time, and in doubt as to whether you can vote, fill out a voter registration card and register to vote. If for some reason you cannot vote, help someone who can and volunteer to get people to the polls on Election Day. You can still play a major role in the electoral process.

Do not be side track by the media effort to focus on personalities and not the issues. The realities are: (1) Donald Trump will throw out the Affordable Health Care Act, further divide our nation along ethnic lines and push for a conservative Supreme Court that will threaten some of our most important gains over the last 5 decades.

Hillary Clinton is bigger than emails and character assignation campaigns. As Secretary of State she has already been in the Chain of Session for the Presidency; she has had relationship with over 130 countries during her term of Office as Secretary of State and she has served one of the largest and most progressive states in the Union as U.S. Senator in two terms. She as served our nation as First Lady through two Presidential terms and knows both the White House and Washington, D.C. She also gave us health care for children and served the poor with legal representation long before it was popular.

Remember, there are only three things that corporate American and individuals understand: Bad Publicity, Loss Profits, and a Vote casted against their interest. Let’s send a message that will be heard long beyond November 8th 2016.