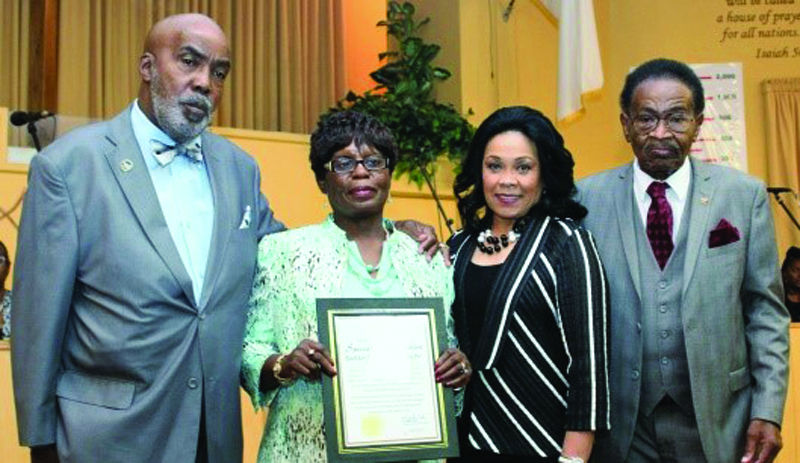 On Saturday, April 30th, City Councilmember Myrtle Cole honored Sarah Collins Rudolph for her life-long struggle and determination to spread the word that love will always defeat hate. Rudolph is the lone survivor of five young girls involved in a church bombing by the hands of the Klu Klux Klan on September 15th, 1963 in Birmingham, Alabama.  Cynthia Wesley, Carol Robertson, Denise McNair, and Mrs. Rudolph’s older sister, Addie Mae Collins lost their lives in the attack. Mrs. Rudolph was in Southern California conducting her Living Legacy Educational Tour. The purpose of the tour was to interact with principals, teachers and students to share her story of forgiveness.

Frank Jordan, who hosted Mrs. Rudolph and her husband George during their visit, opened up the Class Sessions with a brief history on how life was, before African Americans had the right to vote. He also shared with the students, how people of color’s thirst for education was the driving force that compelled people to get involved, and register to vote. Mr. Jordan’s opening comments set the tone for an open discussion between the students and Mrs. Rudolph. Prior to the student’s active engagement, a short film was shown about the bombing and Rudolph’s story. After witnessing the short film, many of the teachers and students had tears in their eyes.

“The highlight of my trip was speaking to the kids and letting them know what happened back then,” Mrs. Rudolph said. Some of the young people don’t know about the history of the bombing. Several people died to give them an opportunity to have an education and vote. They need to be ready for when election time comes.”

Mrs. Rudolph’s story is compelling because she has found a way through her faith to forgive the people who set the bombs off in the basement bathroom of the 16th Street Baptist Church on that fateful day.

“It was about 1986 when I forgave them. I held a lot of it in the inside from being a child. I looked at it as all Caucasians were mean people. But it wasn’t all of them, just some. There were a lot of different people who marched with us. I had to make it up in my mind to forgive. The anger wasn’t going to bring my sister back or the other girls who were killed.”

Mrs. Rudolph’s visit to San Diego began over 2 years ago.

Mr. Jordan coordinated a red carpet salute for Mrs. Rudolph and her husband in Boston, Massachusetts in conjunction with the City of Boston, the Boston Red Sox, the Boston Area Church League, the Greater Boston Convention and Tourism Bureau, along with various business and labor organizations.

There was a Leadership Breakfast and the Master of Ceremony was Professor Charles Ogletree.

Mrs. Rudolph visited several community colleges and was honored at a pre-game ceremony at Fenway Park. Over 30,000 baseball fans heard her story and rose to their feet to give her a standing ovation. After the event, Mrs. Collins expressed her interest in visiting the west coast for the first time.

When Mrs. Rudolph’s Southern California visit was confirmed, the San Diego community made sure they gave a proper greeting. Bishop George D. McKinney graciously offered to honor her at the St. Stephen’s Church of God In Church with a Civil Rights Play and a Gospel Musical.

Written and directed by Maxine Clark, the play depicted scenes such as the moving scene of a young Black girl being sold on the auction block. There was a compelling sound track of an auctioneer played during the scene. Those in the attendance actually challenged their history and found a deep sense of sadness when they connected to the past. The play also included scenes about the Underground Railroad, the March of Washington, and the election of President Obama. The final scene of the play depicted the mutual respect between Martin Luther King Jr. and Caesar Chavez because many of King’s leaders helped Chavez organize the Farm Workers Union.

As a part of the community honors for Sarah Collins Rudolph, San Diego School Board Trustee Dr. Sharon Whitehurst Payne presented a proclamation on behalf of the San Diego Unified School Board for Mrs. Rudolph’s volunteer work around the country educating students about life during the Jim Crow South. The St. Stephen’s Cathedral Choir, under the direction of Norma Handy sang Negro Spirituals and other songs that are significant to the Civil Rights Movement.

While Mrs. Rudolph continues to live with the pain, suffering, scars and the memories of that horrific Sunday morning her message is clear; “When you hate, you cannot live in peace.”