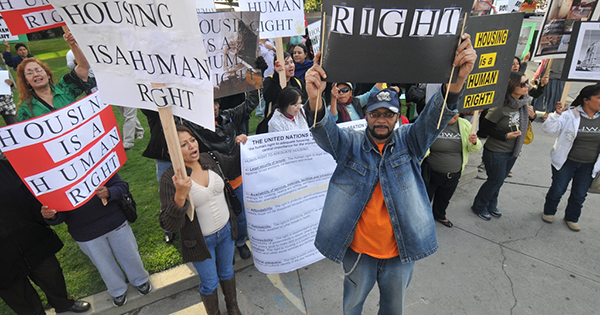 Rolland Curtis Gardens in South Los Angeles is home to many low-income families, some of whom have lived there for 27 years. It’s a shady, gated complex located within walking distance of USC and was built in 1981. Now dozens of tenants are being evicted. The eviction notices are coming from the same non-profit organization who came to their rescue just a few years ago and purchased it to save the tenants.

It all started 5 years ago when their building’s covenant for the affordable housing complex expired. Non-profit T.R.U.S.T. South LA and Abode Communities bought the building. They even promised the current tenants that they would build them a new one. The owners relied on the support of the tenants to get the proposal approved by the Planning Commission, even using tenants in testimonials.

Then the eviction notices started coming; tenants were not expecting this. More than a dozen tenants were told to vacate. When the tenants tried to find another place to live, they could not find anything in a safe neighborhood that they could afford and who would take Section 8 voucers.

A lack of communication

There was no communication to them about specifically when they could move back into the new building. In addition, they were getting stiffed by the owners who initially were only going to give them the bare minimum in move-out expenses, then recanted after pressure from the media and gave them each $7,000.

Now the trust is gone. The tenants no longer have confidence that they will ever be able to move back into their apartments when the new building is completed in 2018. Whether it was intentional to mislead the tenants or just bad communication, the tenants are angry and feel betrayed. As one tenant stated, “It develops sort of a mistrust in the people you’ve been dealing with, the ones you opened up your heart to and put all your energy into helping out.”