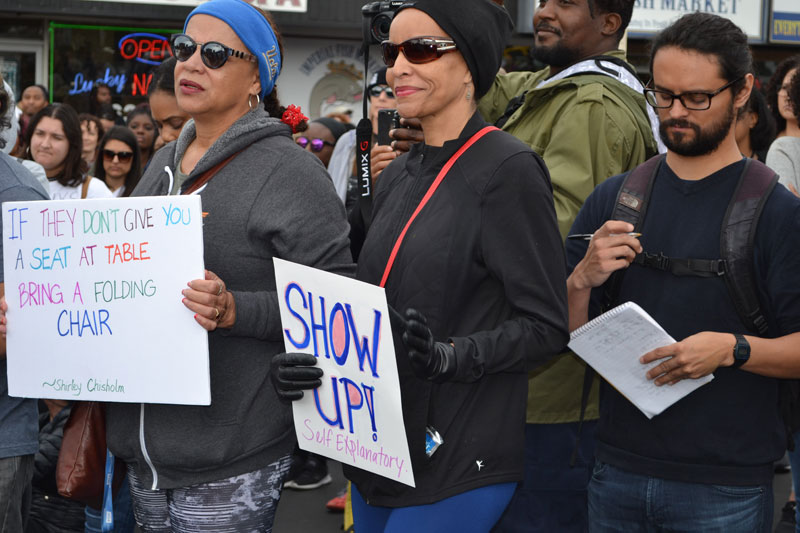 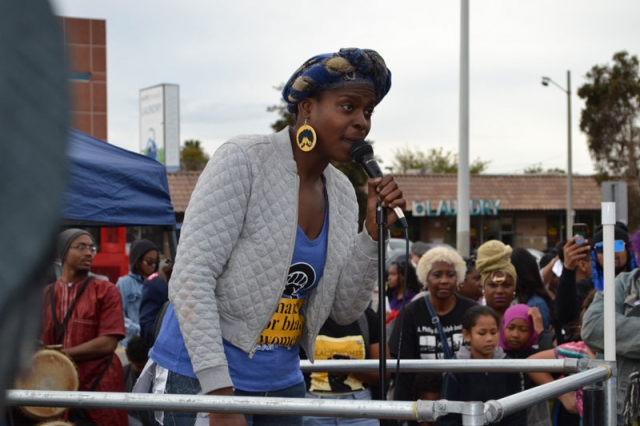 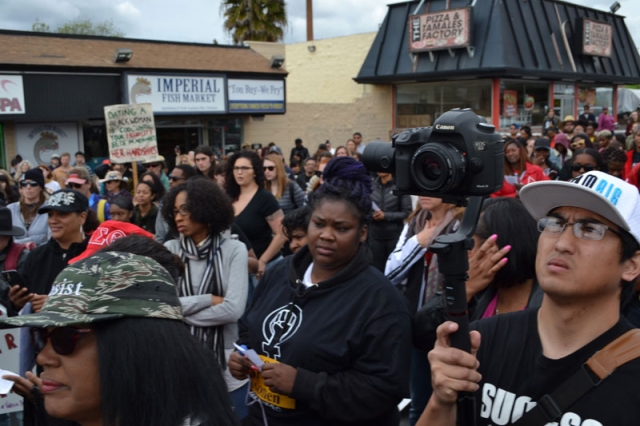 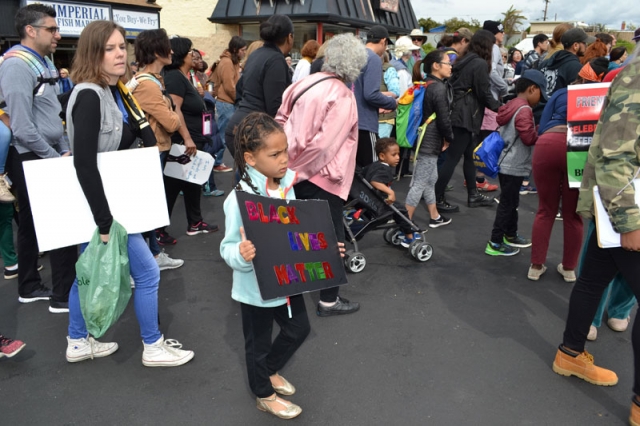 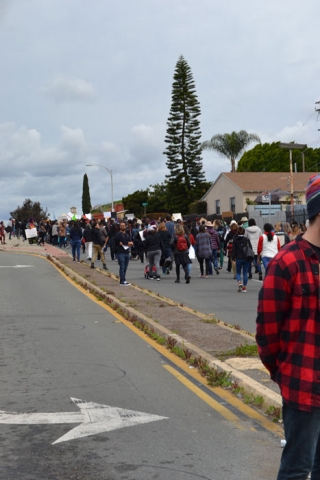 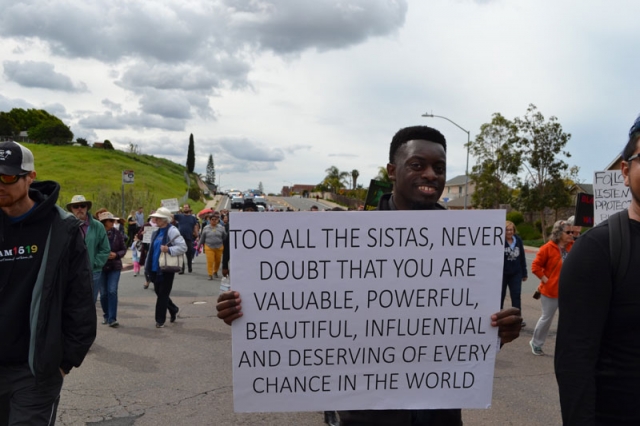 On Sunday, March 10, a diverse crowd gathered on the corner of Euclid and Logan Avenue for an inspiring and well-attended rally to demand economic and social justice for Black women, an end to incarceration, deportation, and healthcare for all. Blueprint, Trans Sistas of Color Project, Black Youth Project 100, and allied state anti-violence coalitions organized the rally and event. Over 300 people of all ages, gender, and ethnicities marched through Southeast San Diego from Euclid to Kennedy Park behind Lincoln High School, chanting passionately, peacefully and holding signs promoting justice and equity.

“Black women’s’ lives are at risk every day. From teenage girls being thrown by police officers in schools to our trans sisters being killed in the streets—it is time our existence is truly respected. Real respect comes in the form of respecting our bodies; ending rape, deportation, and incarceration; ensuring everyone has health care; and prioritizing economic justice for low-income black women,” said Nyisha Green-Washington, one of the many co-organizers of the event.

“Black girls matter! Black girls matter!” These and other chants were heard throughout the crowd. Speakers at the rally included Brandee Joyner, Hamdi Mohamed, Syra Evans, Pamela Wood, Khadijah Abdulmateen, Myisha, and Brittany Lashawn, each passionately advocating for respect for Black Women and girls. They encouraged women to advocate for themselves in every area of their lives, honor their stories and refuse to be ignored or treated as second class citizens.

A few 8th graders in the crowd who are Youth Ambassadors for Focused And Naturally Confident Youth (F.A.N.C.Y.), a nonprofit teen girls program, were energized by the experience. Ka’jah Peterson said, “I think the march is representing how we should have respect for everybody and support what they do. It might not be Black Power or women’s justice, but justice for everybody. Maliyah Hicks noted that the march showed her how people can band together. “People can come together and fight for the same cause, even if it doesn’t specifically affect you,” she said.

The girls, who stood out in the crowd with their matching bright pink F.A.N.C.Y. hoodies, agreed that the event inspired them to find more ways to be helpful in the community. “Once you realize how easy it is to be a part of these things. When you see it on the news it’s kind of scary but when you’re actually here you realize that everyone just wants the same thing. Everyone just want more people to be aware.”

The march organizers originally convened with Black Lives Matter San Diego. The march held Sunday grew out of two 2017 town hall meetings to discuss the current political and economic climate that adversely affects black women. Domestic abuse, rape, incarceration, lack of access to mental health care, and housing were all topics of concern, and each of topic was further illuminated Saturday, March 9 at the group’s Black Women’s Summit held at Skyline Library.

The Black Women’s Summit, designed to build community prior to Sunday’s march, was attended by over 100 women and girls. Kelsey Daniels, who co-organized the march along with Christina Griffith-Jones and others, said, “At a march, it’s hard to have a dialogue. We wanted to have a talk back session with feedback on the important issues we needed to discuss. That’s why we had the summit.”

Daniels noted that it was important to keep the summit local. There were four breakout sessions, including panel discussions on the criminal justice system, immigration, self-advocacy in the workplace, and healthcare. The summit ended with a “reflective session’ where attendees contemplated the meaning of black womanhood and discussed community-building strategies. Daniels said the biggest feedback they received from summit attendees was how the group can keep the conversation going and make the event larger in years to come. “We almost ran overtime. There was a lot to say. There is a need for this – for spaces unique to black women,” Daniels said.

Sunday’s march was the second annual San Diego Black Women’s March. Organizers plan for it to continue each year. The group is planning an April feedback session open to all community members in preparation for next year’s march.