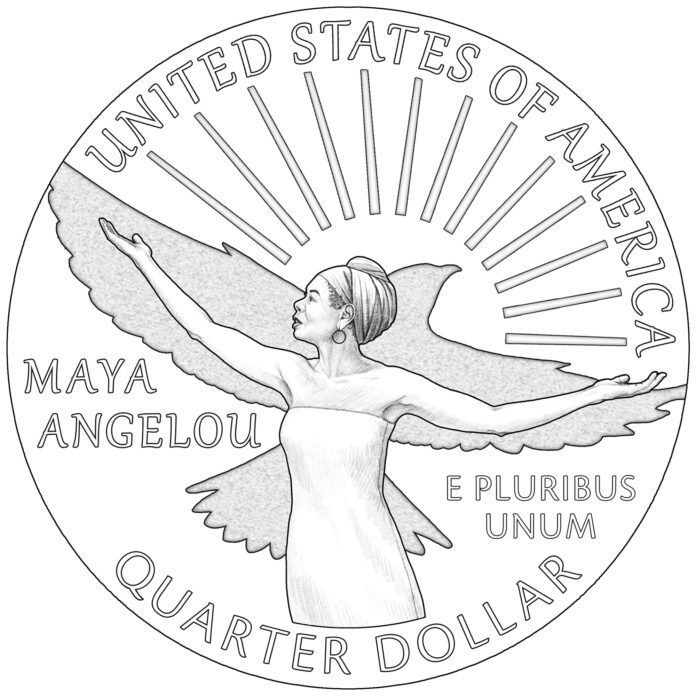 Under the program, the mint will issue up to five new designs each year from 2022 to 2025. Honorees will be from a variety of fields and from ethnically, racially and geographically diverse backgrounds, the mint says.

Angelou was a celebrated writer, performer, and social activist. She rose to international prominence as an author after the publication of her groundbreaking autobiography “I Know Why the Caged Bird Sings.” Angelou’s published works of verse, non-fiction, and fiction include more than 30 bestselling titles.

Angelou’s remarkable career encompasses dance, theater, journalism, and social activism. At the request of Dr. Martin Luther King, Jr., she served as northern coordinator of the Southern Christian Leadership Conference. In 1978, she was a National Book Award judge for biography and autobiography.

Angelou read “On the Pulse of Morning” at the 1992 inauguration of President Clinton. Angelou’s reading marked the first time an African American woman wrote and presented a poem at a presidential inauguration. She was also only the second poet in history to do so, following Robert Frost, who recited a poem at President Kennedy’s inauguration in 1961.

Angelou received more than 30 honorary degrees and was inducted into the Wake Forest University Hall of Fame for Writers. In 2010, President Obama awarded her the Presidential Medal of Freedom. She was also the 2013 recipient of the Literarian Award, an honorary National Book Award for contributions to the literary community.

The Maya Angelou Quarter will be available in 2022.

Jessy Wilson on ‘Keep Rising’ Anthem and the Hope it Brings