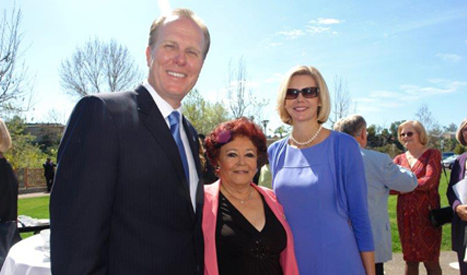 History was made on Monday, March 3rd, as the City of San Diego’s 36th Mayor took his oath of office not at City Hall or downtown, but in Southeastern San Diego’s heart of diversity and color, the Jacob’s Center for Neighborhood Innovation. The facility’s main auditorium designed to hold over 600 people was filled to capacity as people of all walks and stations of life made their way to this historic event. Being one of San Diego’s most impoverished areas, District 4 proved to be a strategic location that would make history for Faulconer. “For those of you who don’t know, this is the first Mayoral swearing in ceremony held in Southeastern San Diego in our city’s history, and I couldn’t be prouder to be here today,” stated Faulconer. After his swearing in, he graciously thanked those that have carried the torch and held the city together during its time of turbulence, which started shortly after Bob Filner’s resignation in late August amid turmoil over his treatment of women and sexual harassment allegations. “I’d like to give my sincere gratitude to Council President Todd Gloria who guided our city with compassion, care and a great deal of poise,” he shared. He also thanked the city employees for their dedication and support as well as the council. 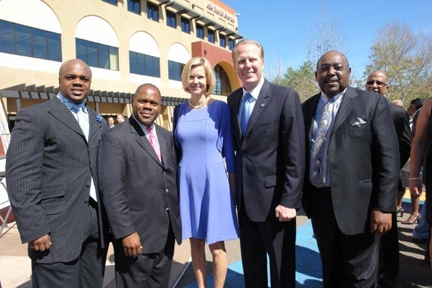 Faulconer’s message to the people was a message reiterated from his campaign. A message of inclusion, and transparency. “When we are inclusive and transparent, there is no limit… we are one city,” he said. “San Diego is not at its best till every community is at its best,” he stated, both in Spanish and in English, also saying “our diversity is the fabric that weaves our city together.”
Within his first 20 minutes before the people, Mayor Faulconer announced a focus on neighborhoods and the repair of infrastructure as top priorities behind public safety which was first on his list. He acknowledged the appointment of Police Chief Shelly Zimmerman, the first woman to hold that position in the history of the City of San Diego, and expressed confidence in her ability as a 30 year veteran of the department who enjoys his full confidence. He expressed a desire to increase the number of fire stations, improve ambulance response times, especially in areas of the city like Southeastern San Diego and to expand afterschool programs, which have not been a real priority since former Mayor Susan Golding.

He told the people that their message of a desire for an “independent voice that doesn’t just listen, but acts on your behalf” had been heard; he promised “a government that works for you,” and to work both for the city, its people and its employees. As the first city councilmember to be elected as mayor in the last five decades, Faulconer promised to never lose sight, and to most of all listen.”I wish some of our past mayors would have listened to our councilmembers more, and I hope I feel that way in six months,” he jested. “It’s been a difficult year for our city, but we rose to the challenge,” he said. The Mayor’s address had something in it for everyone, and not one element of the City was omitted.
Rev. Gerald Brown, executive director for the United African American Ministerial Action Council, was in attendance at the inauguration and expressed a willingness to support Faulconer’s efforts. “We will work with the Mayor to accomplish the goals that he has set forward for our communities, and we will hold him accountable,” he shared. “It’s the first time in the history of this City that we have a coming together to work for the common good for all. It’s going to take all our working together to achieve greatness for San Diego.” 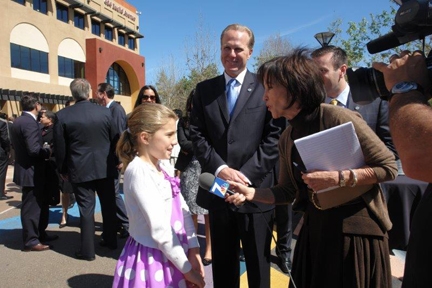 Councilmember Myrtle Cole, who’s district hosted the inaugural affair stated “Mayor Faulconer’s Historic Inauguration in the Fourth District brought many people south of I-8 who wouldn’t ordinarily visit our communities. It was a significant gesture and it is the beginning of the Mayor keeping his campaign promises to be a Mayor for us all.” She continued “The Jacobs Center for Neighborhood Innovation was the perfect venue and one of our crown jewels.”

Mayor Faulconer’s transition teams have been inclusive and the days and weeks ahead will tell us much more. The inaugural party continued at the Broadway Pier on Monday evening from 5:pm until 8:30pm as the official time.