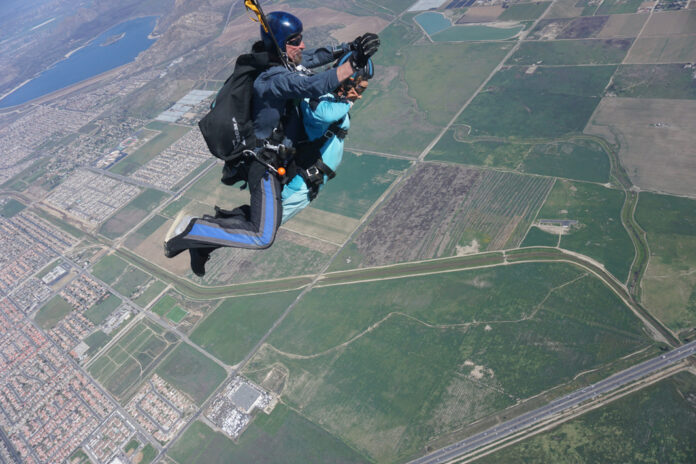 On February 24, 2020, Mrs. Gloria Grant, 93 years young, did what many of us would never be courageous enough to accomplish: she skydived out of an airplane at Perris Valley Airport in Perris, California, with the assistance of an American soldier, from a height of 12,500 feet.

It was one of many accomplishments for the San Diego resident. Mrs. Grant is a retired business person that owned and operated the first African American owned motel in San Diego, the Ebony Inn Motel. At present, Mrs. Grant’s long list of credits includes being a pageant consultant and coordinator, public and community relations person, advertiser, fund-raiser, organizer, researcher, real estate owner.

She received her Bachelor of Arts degree in Industrial Technology from National University and worked from 1965 to 1985 as a Technical Engineer at the Navy Ocean Center.

If those successes weren’t enough, Mrs. Grant has done a great deal of professional modeling for Clairol, Saks Fifth Avenue, Walker Scott, JCPenney, Sears, and Jet Magazine, television, and for Navy brochures. She worked as a store detective for J.L. Hudson Department Store in Detroit, Michigan and as an undercover detective in San Diego, CA.

And the impressive list of achievements continues: She has served as an active member of her community as a teacher and producer of various pageants, fashion shows and plays. She has also lectured in many of the public schools and with senior citizen classes. She has served as a member of the government’s Navy Operational Support Center (NOSC) Equal Opportunity Board, and board member of the Citizens Council at the Educational Cultural Complex, San Diego Community College District. From 1992-1995, she served as a Research Assistant at the University of San Diego, where she was responsible for recruiting caregivers for Alzheimer’s research, and since 1998 she has assisted the Somalian community in San Diego as Coordinator of the Somali Youth & Education Center and assistant manager at the Aswan African Cafe and Factory.

She has taken a very active position in her church, Bethel A.M.E. Church of San Diego, CA. There she was the treasurer for the Missionary Society, served on the Pastor’s Aid Board, Steward Board, and the Trustee Board. She also was the treasurer for the Southern California Conference of the A.M.E. Church, Fifth Episcopal District, representing thirteen Southern California A.M.E. churches. In addition, she was the past project leader for the Y.P.D. and a chairperson for many fundraising projects. She received Bethel AME’s Women Of the Year award in 2001.

Her new venture began in 2004 as sole-proprietorship of Aswan Hall Banquet Catering Service and Maryam Sambussa Factory. Since 2016, she has volunteered her time to Hand In Hand Mission Outreach. Her February 24, 2020 skydive at Perris Valley Airport earned her a Certificate Of Achievement. That feat is likely not the last of her successes sure to come.