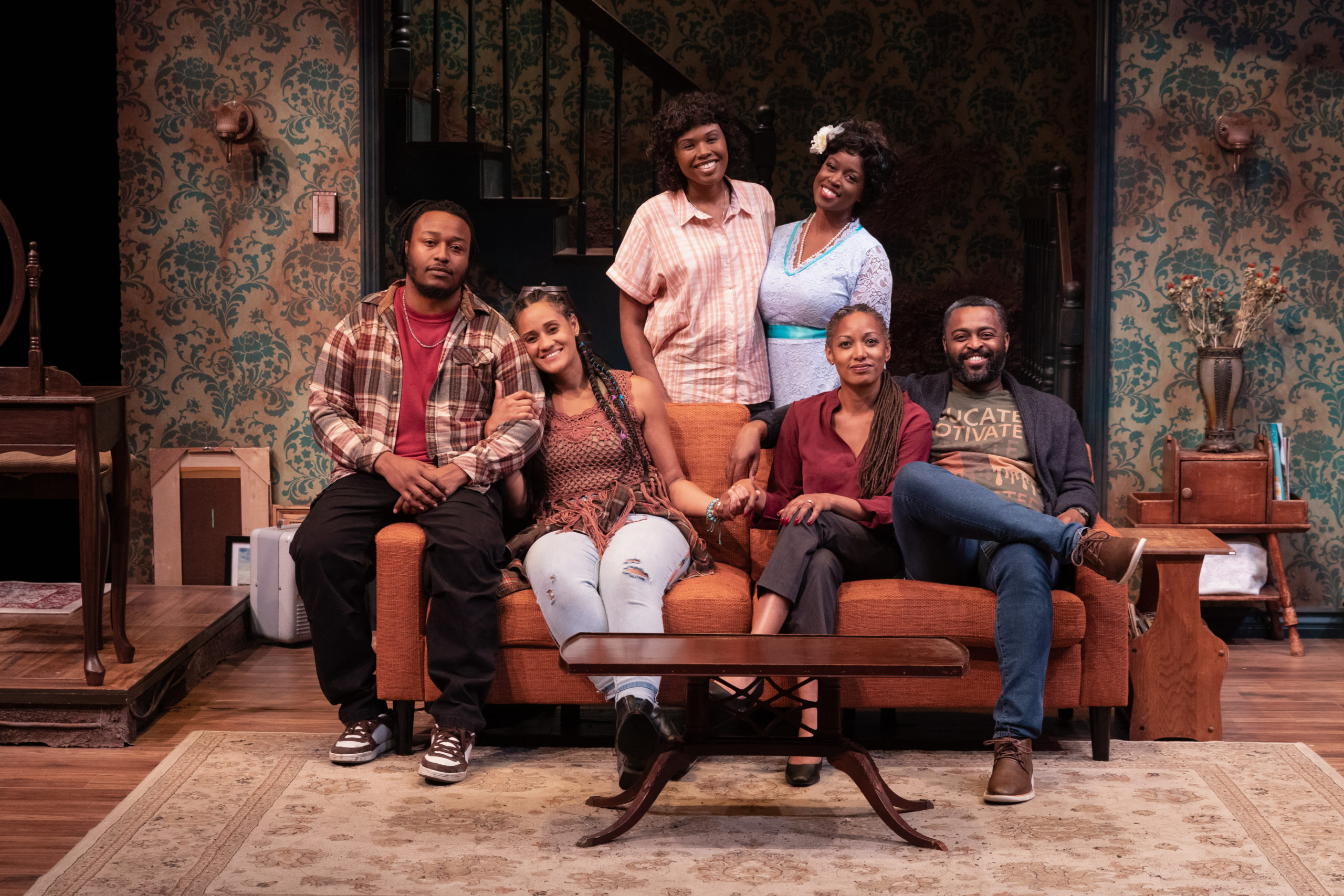 Geography, generations, and gentrification: these all-powerful themes converge in Mud Row, now in its West Coast premiere at the Cygnet Theatre. Written by playwright Dominique Morisseau, a MacArthur Fellows “Genius” grant awardee, the play takes the audience on a journey spanning 3 generations from the turbulent 60’s to present day, fusing themes of race, legacy, family, and sisterhood. The work is an ambitious theatrical undertaking, jumping forward and back in time, and is constructed and executed masterfully by playwright Morisseau, and San Diego’s own directing gem, Delicia Turner Sonnenberg, along with an ensemble of gifted actors.

The play takes its name from the historically Black neighborhood of West Chester, Pennsylvania, known as Mud Row and centers around a house being passed on from grandmother Elsie (Andréa Agosto), who aspired to be part of the “talented tenth” in social strata, to granddaughter Regine (Marti Gobel), accomplished but fragile, determinedly striving to overcome childhood trauma.

For actor and Kennedy Center-trained teaching artist Marti Gobel, performing in Mud Row has been rich and fulfilling. Significantly, Gobel notes that in her two decades as a theater professional, this is only her second time having a Black director and working in an all-Black cast.

“I hope this play creates a hunger and a demand for this kind of story in San Diego,” offered Gobel in a recent conversation after the play’s opening. Plays like Mud Row with stories particular to the African American experience need to be seen. “One every other season is not enough. With Mud Row, you’re getting an appetizer. We need more.”

What drew Gobel to this role? “I love Dominique Morisseau,” she says, having previously directed and performed in two of her works. “I like specific stories about my people that offer a universal way to look at the African American experience,” all key in Morisseau’s work.
Legacy and sisterhood figure prominently in the play.

“Strengths are brought up as well as resilience, but also bitterness and loss,” Gobel offers. “This is a family, yes, a Black family, but a family, and I think most of the patrons will see echoes of their own family played out onstage…Today there’s a lot of talk about the complexity of our roots as a people and being in the mud and what it means to get dirty within the context of African American behavior.”

With that in mind, for Gobel, a particularly powerful and endearing aspect of the show is its portrayal of two African American men, partners to the two sisters (Rondrell McCormick as Darin and Leo Ebanks as Tyriek) who come from different experiences but are entirely dedicated to their partners. “I love seeing that on stage, she says: “supportive, loving Black men with the women they’ve chosen to be with.”

“The plays I am most attracted to as a director are the ones where there is an intimate human story told against a broad backdrop. In the case of Mud Row, it is an intimate story about sisterhood and family told against the broad backdrop of American history – racial and social change in both the 1960’s and now. I’m drawn to this play because it is smart, funny, sexy, moving, and ultimately cathartic,” said Sonnenberg.