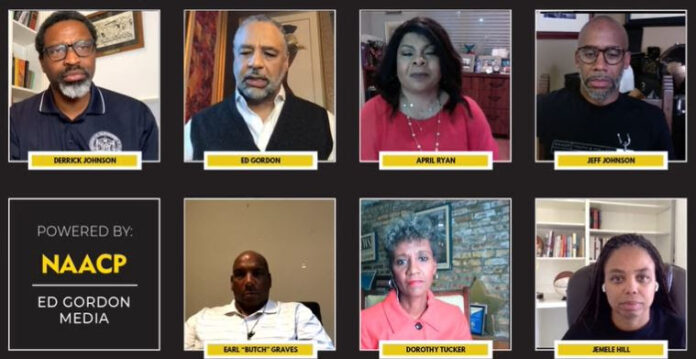 A recent NAACP “Black Media Speaks” forum plummeted into a conversation in which the future of hard-copy Black-owned newspapers was all but pronounced dead. To the shock of some of the members of the National Newspaper Publishers Association (NNPA), A federation of more than 200 Black-owned newspapers, there was not one Black newspaper journalist or publisher on the panel.

“In 2020, for there to be a virtual panel on Black Media and not invite or involve the NNPA or any of our member publishers to be on the panel goes beyond a mere oversight,” said NNPA President/CEO Benjamin Chavis in an interview about the May 20 forum. “We’re certainly going to meet about it as part of our ongoing strategic alliance between the NAACP and the NNPA.”

Hosted by NAACP President/CEO Derrick Johnson and moderated by journalist Ed Gordon of Ed Gordon Media, formerly of BET, the forum had been widely promoted by the NAACP as a discussion on the need for Black media during the coronavirus pandemic and continued physical attacks on Black people by police and others. But those topics were barely mentioned during the entire hour.

Chavis was particularly taken-aback by remarks from panelists who painted a grim picture about the future of Black newspapers. Perhaps most notably were comments by Earl “Butch” Graves, president/CEO of Black Enterprise Magazine.

Graves was responding to a caller who identified herself as a second-generation publisher among those still “on the front line”. She asked how members of the panel would use their positions to support Black print publications.

At first, Gordon responded briefly: “This is all about survival at this point.” Gordon mentioned how he’d worked closely with Real Times Media CEO Hiram Jackson to assure the survival of several of his Black-owned newspapers – such as the Michigan Chronicle and the Chicago Defender – now fully online. Then Graves weighed in heavily.

“We can’t be tone deaf though,” Graves said. “The reality is it’s like those that are in retail that thought that retail would always survive…Print is not going to survive. It will not be here five years from now. That’s a hard pill to swallow but it is a reality. So, either you reinvent or you die. And the reality is that now Black-owned media companies need to accept that cold hard fact.”

Dorothy Tucker, president of the National Association of Black Journalists (NABJ) and a long time reporter for CBS, Channel 2 in Chicago, had stated earlier that there are “170 African-American newspapers that still exist.” And, she said, “It is critical that we as African-Americans support Black-owned media,” including historic Black newspapers that fought for the freedom of Black people and continue to do so.

Underscoring the need for a Black newspaper representative on the panel, Chavis said Tucker’s number, 170, was inaccurate. Based on the NNPA member papers received at the D.C.-based NNPA headquarters, he said, there are 220 NNPA newspapers in print and 10 online publications that are Black-owned.

Following up on Tucker’s point, Graves continued, “We probably don’t need 176 – or whatever the number is exactly, Dorothy…We will probably need less than that. But those will have to survive doing it a different way. You cannot continue to print and survive…We can see this right now. Print will not survive. Therefore, we will have to do something in a different capacity to make this work.”

Chavis reflected on the videotaped forum. “It was like our epitaph. They were having the funeral, the eulogy, and the final rites.” But, he noted, this is historically how the Black Press has been treated.

“For 193 years, the Black-owned press, since the days of Freedom’s Journal, has faced the negative speculative and false analysis – not just from White supremacists about the value of the Black Press – but sometimes the history will show that at one point some of our own people also attempted to undervalue the purpose, the mission, and the sustainability of the Black Press. By analogy, this is the same argument that people have said about HBCUs (Historically Black Colleges and Universities) and the same questions about the need for the continuation of the historic Black church. If there’s any person of African dissent who does not know the value of the Black-owned church, Black-owned HBCUs; Black-owned newspapers; then that person or group of people of African descent needs to re-immerse themselves in the history and the long struggle of African people to build our own institutions, to build our own businesses, and to have our own voice in all of the media platforms – print, digital, online and social media.”

Chavis was not alone in articulating the views of the NNPA. Denise Rolark Barnes, normally a mild-mannered NNPA publisher and former NNPA chair, emailed a letter expressing “disgust” about the forum to NAACP Senior Vice President of Marketing and Communications Aba Blankson. Barnes sent the letter after listening to her staff at the Washington (DC) Informer Newspaper express strong concerns about the omission of Black newspaper representatives.

Barnes wrote, “I am sure by now you and President Johnson have heard from some of our Black Press publishers around the country expressing their disappointment with the NAACP’s participation in last evening’s Black Media Speaks event hosted [by] Ed Gordon. She wrote that the Informer staff felt “consistent disrespect by the NAACP and NABJ. They shared their observations about how often Black journalists are featured in discussions about Black Media, who have never worked for the Black Press.”

Barnes continued, “Understandably, we are all bewildered about why the nation’s oldest civil rights organization would allow a discussion [about] Black media ownership without having someone from the nation’s oldest black media ownership organization – the NNPA – at the table. This happens all too often, and I join my colleagues in expressing my disgust.”

The letter concluded, “What our readers know, and the NAACP is ignorant of, is how the Black Press is growing more robust even in the midst of COVID-19. We are the ones on the ground, bringing to life the stories of how COVID-19 is affecting Black communities across the country. We are telling the under-reported stories of our survival despite an administration that has abandoned us, and organizations – including the NAACP – that ignores us. In print, we report these stories weekly, but online, we publish them every day.”

Blankson responded the next day, directing a letter to Barnes, Chavis, NNPA Senior National Correspondent Stacy Brown, and the “NNPA Family.” Both letters were copied to the Trice Edney News Wire.

Starting with how she appreciates “the direct feedback and your candor”, Blankson continued, “Our partnership with the NNPA is important to us. We value our shared engagements and take pride in sharing articles from the Washington Informer, Afro, Defender and others in the weekly news recaps distributed to our networks. While it was not our intent to exclude you, I recognize that was the impact.”

Blankson said the Black Media Speaks forum was one of several events planned for this year. “In addition to NNPA, there are other voices we must include in future conversations, especially those about media. I want to use this moment to strengthen our relationship.”

She offered to “work together to plan an NNPA /NAACP specific event in the coming weeks.”

Blankson did not explain how or why members of NNPA or other reporters for Black newspapers were not invited to the “Black Media Speaks” panel in the first place. Neither did NAACP President Johnson respond to repeated requests for an interview about the matter.

However, the NAACP’s Crisis Magazine, a quarterly print publication, was not spared amidst the criticism as NAACP President Johnson took it to task.

“We run the Crisis Magazine. It’s been in continuous publication,” he said. “But it’s not timely. And we have to recognize that until we can develop the publication to where people can consume it in this new media reality – that they see the value in it – I can’t fault others for not investing in Crisis when we have not kept up with the times. That’s the reality across the board when we’re talking about Black media.”

Johnson said the Crisis has survived mainly because it’s been underwritten. “Because if it had to stand up on its own, it would have been out of business 50 years ago. So, we have to figure out a new business model to keep it moving.”

Likewise, Graves said his late father, Earl Graves Sr., would not understand the decision he has now made to move Black Enterprise almost completely online. But, he said, it has been done with great success and an astronomical increase in readership.

Other members of the Black Media Speaks panel were Jeff Johnson, formerly of BET and currently of the Rickey Smiley Morning Show; April Ryan, White House Correspondent, American Urban Radio Network, and CNN political analyst; and Jemele Hill, writer for the Atlantic and host of her own podcast, Jemele Hill Unbothered.

Near the close of the discussion, Gordon told the panel that he had an idea that he would be floating with each of them soon and he hopes at least a couple of them would agree. He did not say publicly what the idea is.

Chavis concluded, “I am a loyal and life-member of the NAACP and I know we will work this matter out. Both the NNPA and the NAACP need to be made stronger together by working together to help improve the overall quality of life of Black Americans and all others who cry out for freedom, justice and equality. Thus, the NNPA does not accept the eulogy, the final rites or the epitaphs that are now being untimely articulated by people who should know better.”