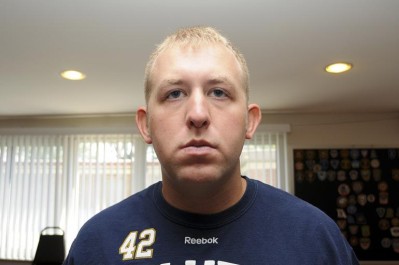 The National Bar Association (NBA), “the nations oldest and largest network of predominantly African-American attorneys and judges” has filed a lawsuit with the Missouri Department of Public Safety asking that Darren Wilson’s peace officer license be revoked indefinitely, meaning he would not be able to serve as an officer in the state of Missouri.

The organization states on their website that Wilson’s resignation was not a hash enough punishment, and that the man who killed unarmed teen Michael Brown in August committed a criminal act that day and now needs to be banned from potentially hurting more African-Americans.

“A close examination of Wilson’s actions on August 9, 2014 provides ample evidence that he is not qualified to continue as a law enforcement officer,” stated President of the NBA Pamela Meanes, according to the group’s webpage.

One aspect about the Wilson/Brown case that the association thinks should disqualify the former officer from returning to duty was his perception of Brown as a “demon.”  If he views those he is supposed to protect and serve as “figurative characters,” then he is not fit to do his job, says the association.

“Wilson’s perception of the citizens he was paid to protect can only lead a reasonable person to conclude that his mental state and judgment would place African American citizens in danger anywhere he works as a law enforcement officer,” said Means.

NBA is also arguing that the Jennings, Missouri Police Department— the place at which Wilson received his basic academic training— attributes to his incompetence to serve as an officer.  In 2009, the city council chose to disband the  department because of  “distrust and racial tension between the white police force and black residents,” according to NBA, so the association finds it troubling that this is where Wilson learned to police.

In November, after the grand jury decided not to indict Wilson for killing Brown, CNN legal analyst Mark O’Marasaid that even if Wilson ever wanted to be a police officer again, it would be nearly impossible.

“Darren Wilson is going to have a tough time because even if the presumption was he did nothing wrong, that doesn’t matter,” said O’Mara. “He is now the focus point for all the anger and animosity that exist in the black community.”