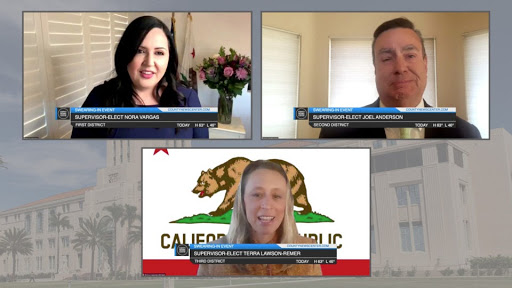 Three new members of the San Diego County Board of Supervisors were sworn in during a virtual event on Monday.

Supervisor Nora Vargas succeeded long-time District 1 Supervisor Greg Cox, who had served on the board since 1995. The district covers Coronado, Imperial Beach, Chula Vista, National City, some communities within the City of San Diego, and unincorporated areas including Bonita, Lincoln Acres and East Otay Mesa.

Supervisor Vargas was sworn in by her goddaughters, Fatima and Farah Jimenez. Afterward, the new board member made remarks in both English and Spanish noting her status as the first woman of color, an immigrant and first Latina to serve on the board.

“I may be the first, but I will absolutely not be the last,” said Supervisor Vargas.

Supervisor Joel Anderson took over the reins for District Two Supervisor Dianne Jacob who began her stint on the board in 1992 and is the longest-serving board member in San Diego County government history. District 2 covers a broad swath of unincorporated East County, including the communities of Lakeside, Alpine, Ramona, Julian, as well as 11 Indian reservations, La Mesa, El Cajon, Poway, and some communities in the City of San Diego.