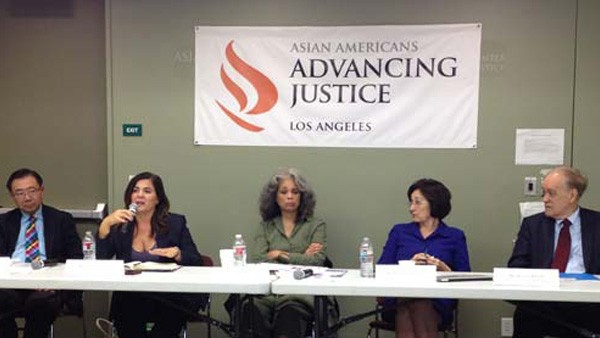 By George White
Special to the NNPA from NAM

LOS ANGELES – As new data on California’s educational inequities mounts, a statewide multicultural coalition is forming to push for legislation that would address disparities in K-12 schools and the state’s universities.

Kwoh announced the new campaign at a May 22 forum in Los Angeles organized by New America Media, where speakers discussed a new UCLA Civil Rights Project study that shows that California schools are more segregated than ever by race, class and language. Two directors of the UCLA center that produced the study, civil rights attorney Connie Rice and education activist Michele Siqueiros, joined Kwoh as panel presenters at the forum.

“We need a campaign to expand educational opportunity and ensure that the most disadvantaged are part of that expansion,” Kwoh explained. “We need a movement to do that.”

The coalition plans to call on the state government to assess the impact of Proposition 209, the 1996 voter-approved ballot measure that banned the use of race and ethnicity in college admissions. Some education equity activists argue that the ban is the cause of a steep drop in the number of Latino and African-American students in state universities. If that is found to be the case, the coalition’s statement of principles argues that the state should amend or repeal the ban.

The group will also push for greater state investment in higher education, including the expansion of admissions of California students in the state’s universities. The coalition also aims to give students at schools in low-income communities greater access to high school classes required for college admission.

Kwoh said coalition members would meet with legislators before and after state budget votes in mid-June to press for the changes.

Coalition members must also engage legislators on issues related to the disparity in resources at schools in low-income communities, which are largely black and Latino, said Connie Rice, co-director of Advancement Project, a civil rights organization with offices in Los Angeles and Washington, D.C.

“It’s a political problem,” said Rice. “Americans don’t want to talk about segregation. We must convince politicians that they have a role.”

“My daughter attends a magnet school and it looks more like [the population] of L.A.,” she said.

“Collectively, we are comfortable talking about race as it relates music, food or festivals. We go to Koreatown for barbecue. We go to Chinese New Year festivals in Chinese communities and we celebrate Cinco de Mayo more than Latinos.”

“If we don’t get more Latinos and blacks into college, we are not going to be happy living here,” she said.

All of the panelists agreed that the large number of Spanish-speaking students in the state should be considered an asset in today’s globalized economy. Patricia Gandara, co-director of the UCLA Civil Rights Project, said that all California students should be required to study a second language.

Her colleague at the Civil Rights Project, Co-Director Gary Orfield, added that California’s “linguistic richness” should be considered an asset.

California’s schools have been increasingly segregated by language, race and class since the 1979 vote for Proposition 1, which banned court-ordered bussing of students to achieve integration.