Home Opinion and Commentary Of Land and Nation

Building community and safe places for ourselves

(This is the first in an occasional series of articles spotlighting efforts of Blacks to do for self, to own and build their own reality and make their communities safe and decent places to live.)

When Virginia Muhammad first started community development in Boston, she built her first house, a two-family home, right next door to the home she owns.

“That was the taste, if you will. That’s how I started. And it feels good. Actually, it feels wonderful. It feels wonderful to have a sense of accomplishment,” she told The Final Call. “But when you look at the greater scheme of things and you see how much more needs to be done, you see how important it is for all of us to get on the same page.”

She is one of many across the country who is carving out spaces for Black self-sufficiency and Black existence through land ownership.

Virginia Muhammad is a founding member of the Grove Hall Neighborhood Development Corporation (NDC) out of Boston, Mass. It was founded in 1979 and is located in the heart and soul of the Black community in Boston.

“Our community was just like any other Black community in the United States of America. Our community was full of vacant land, full of blight and White flight and absentee landlords. And so, as a result of that, any intelligent person would want to do something about it. Any intelligent person would not want to live under those conditions,” she said. “And so, in the city of Boston, in our community, the city of Boston itself was the largest slum landlord. They owned most of the vacant land and most of the blighted land. And so as a community, we would come together and challenge the city. What are you going to do with all of these abandoned, boarded up buildings, and what are you going to do with all of this trashy land?” 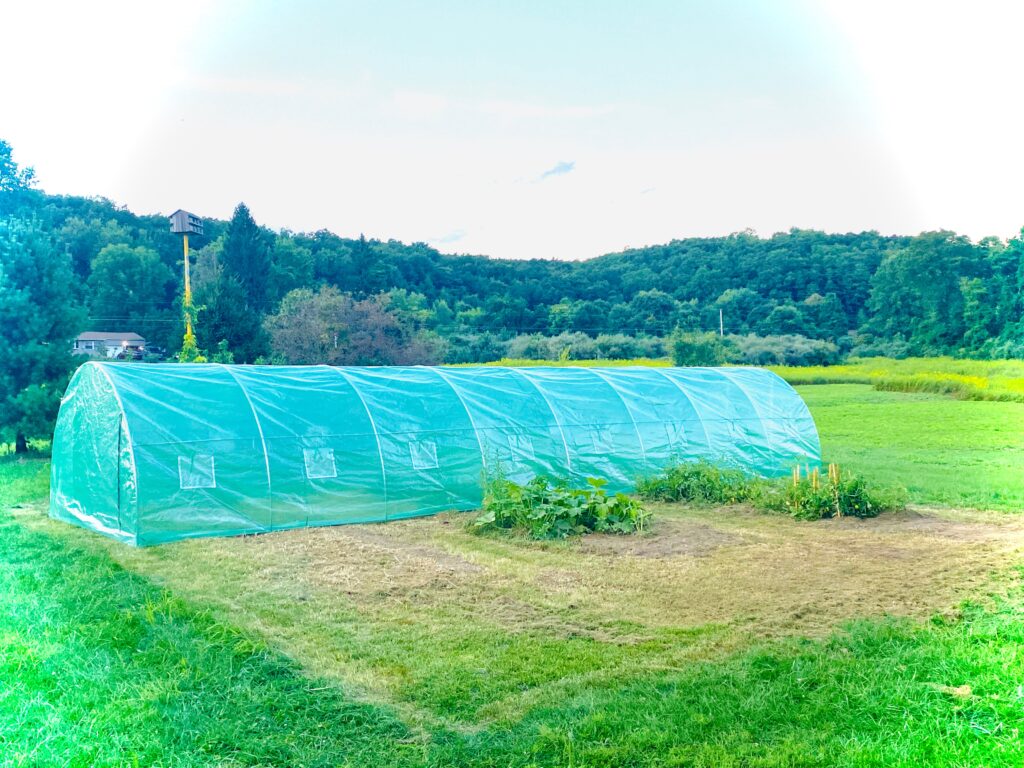 A greenhouse on MSGLV Farms in Pennsylvania, a 22 acre property owned by Michael J.H. Muhammad and his wife Anecqua.

Grove Hall NDC was formed from the dissatisfaction of the Black community. Different Black organizations united to form the board and Virginia Muhammad was chosen to be president. She was and remains a leading member of the Nation of Islam’s mosque in Boston, which backed the effort.

“We got the job done. And we not only developed the building, it was a mixed-use building.  Twelve families and two storefronts at the time. And we attracted another bank to be our tenant, and it was a success,” Virginia Muhammad said.

The Grove Hall NDC, along with other Black organizations, also built a $14 million shopping center, and the NDC has the largest stock of subsidized, affordable housing in the community.

“Our concentration is first our immediate community. And then we need to get the word out throughout not only the city but the state, and collectively come together and identify a section or a land in this country or elsewhere,” the developer said.

Many have already carved out their own sections of land. One of those people is Melody Muhammad.

From the city life to urban agriculture

Melody Muhammad grew up in New York. She used to think if you ate apples off of trees, you might get sick. So when she started growing food, she was amazed.

Her journey started when she was delegated to go to Will Allen’s urban farm workshop in Milwaukee, Wisc., where she got certified as an urban agriculturalist. Afterwards, she returned to the urban community of Chester, Pa., and she, along with others, physically built a hoop house, which are small structures used for planting seeds. 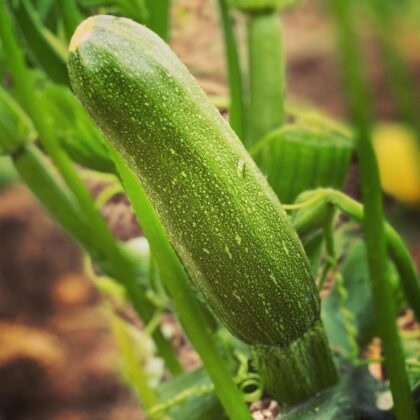 “In that hoop house, we grew watermelons in and outside of it. We grew onions, we grew all kinds of vegetables, we grew callaloo, we grew tomatoes,” she said.

Melody Muhammad went from not knowing anything about agriculture to now having a master gardener certificate, a tree tenders certificate and training in beekeeping 101. Her inspiration came from the Honorable Minister Louis Farrakhan of the Nation of Islam, whose words about land acquisition gave her a chill. She had always been passionate about real estate and had bought a few properties in Chester, but she wanted land.

“I ended up selling all of the houses that I had, except the one I live in. And I ended up selling jewelry. I ended up selling fur coats. I ended up raising money, saving money. And I’m telling you, it was a huge sacrifice, but the day before Covid struck and we went into quarantine, I purchased seven acres, and it had four double wides on it,” she said. Double wides are three and a half bedroom and two bathroom ranch-style houses. She already has tenants in each of the four homes, which is helping her to take care of the mortgage. She also just purchased log cabins to put on the land, which is located in Robbinsville, N.C. 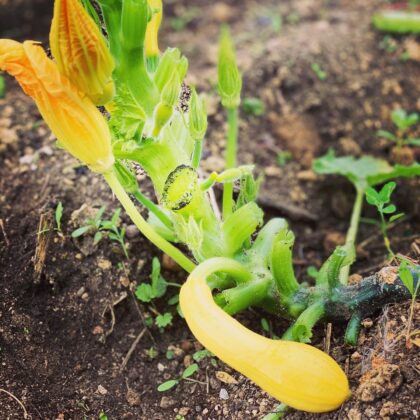 “We purchased the hoop house. We’re going to put the hoop house on it. And the first year, which is this year, we’re doing a two week summer camp, where we teach children how to do different aspects of agriculture, horticulture and survival skills,” she said. “And moving along in the next five years, our goal is to have an agriculture prep school, where we build a school, and the children can physically live there, and then we of course are going to have horses and we’re going to have some sheep and chickens and all of those other things.”

Like Melody Muhammad, Michael J. H. Muhammad was an urban kid. He grew up a few doors down from New York in New Jersey. His father and grandfather would take him and his brothers camping, and they would travel to different areas and land across the country, but they didn’t grow up on a farm nor did they have acres of land. Still, that desire was already being cultivated.

One day in the summer of 2019, he told his wife, Anecqua, “I don’t want another child coming into this world and we are someone’s renter, and someone is considered our landlord.”

They jumped out, got a real estate agent and looked for land. Within two months, they were already in the process of getting a 22-acre property in Lehighton, Pa., that they’re on now. Initially, they only wanted one acre and simply wanted ownership without any neighbors around.

“Young couple just want to get something, and Allah (God) said, well you took that one step towards the desire, and I’ll take an additional 22 towards you, or 21 towards you, and He blessed us with 22 acres of land right at the end of December. I mean, right at the end of 2019,” he said. “So you’re talking about just two to three months before Covid really hit here in 2020.”

The 22 acres was owned by an older man whose wife had died in a car accident in 2012.

“He survived, she didn’t make it, so he was depressed. He said this was me and my wife’s retirement home. We were going to live here until the end of our days, he said, and people have called us. Developers want this, but they want to spray the property with chemicals and we don’t believe in that,” Michael Muhammad recalled. “He said, but now you guys, you’re young. You’re so young and you want to treat the property with care like we do, and you have vision for it. He said, you know what, this is yours. He said you and your wife and your children, you can have this.

“We said, ‘Oh Allah, this man gave us heaven.’ He gave us his heaven, and Allah took someone else’s pain, I’ll say, and made it our pleasure and our reward and our blessing,” he said.

The property has a pond that has its own natural life, such as frogs and turtles. “Sometimes we wake up in the morning and look out of our bedroom window, because the pond is directly behind our window, and there’s 50 geese back there and ducks,” Michael Muhammad said. 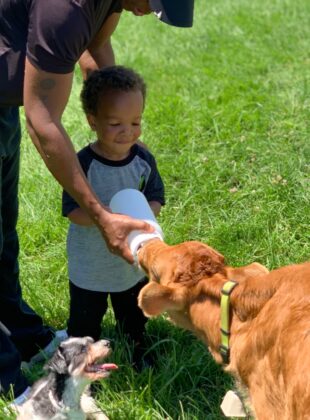 He said the desire is to make the 22 acres into their own version of a state park.

“You come here and you walk around, we’re already working on things like that. You walk around the property. And you go to the pond, and you go fishing, because we’ll have fish by April in there. There’ll be bass and there’ll be trout so the Believers can come here, sit on the lawn, and pull out a beach chair and fish for the first time. They can pull out their little inflatable tubes and go out into the water if they feel like it, or they can go on a horse and take a walk around a property or play with the sheep, or play with the goats or just sit in the grass or take a kite and fly it,” he said.

“Whatever they want to do, this is what we’re making this to be, a place where we are growing food, but also a place where the Believers can find some happiness in a place to get away from some of the stress that they may have where they are, until this inspires them to do the same thing for themselves.”

Michael Muhammad and his wife Anecqua also purchased a 16-acre hay farm with another family, Sultan and Khadijah Muhammad, and he is finalizing 80 acres in Arizona.

Just go get it

Virginia Muhammad said she was inspired by the Honorable Elijah Muhammad’s words that land is the prerequisite to freedom and independence. “The earth is 196,940,000 square miles. And I say to us, we need to act like it,” she said.

When Melody Muhammad purchased her seven acres, her credit wasn’t the best, but she feels good.

She said unity is key, because you can’t do it all by yourself. Michael Muhammad said if someone wants to acquire land, they just need to do it.

“But my bank account. But my job. But this. But that. Whatever that but is, that’s not Allah. We over-analyze something that He has already given success to,” he said. “He has already done all of the hard work. He has already gone out ahead of you, made relationships, made the doors open. It’s us that close them. So I would say to anybody that wants to do it, do it. There’s nothing stopping you but yourself.”