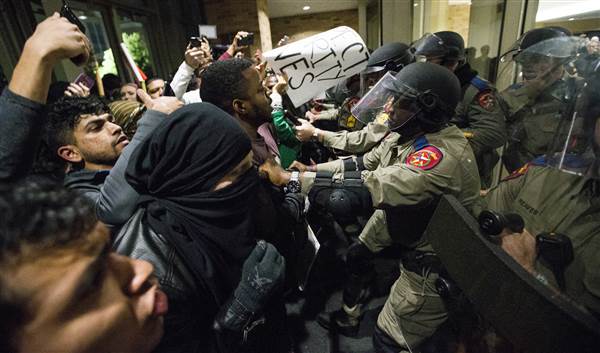 By Sophia A. Nelson

Whenever we see images of young black men in America, we always see the worst.

We hear in real time the national TV pundits and politicians who candidly refer to them as “thugs” whenever one of them is arrested or accosted by Police. It’s no surprise: our national consciousness about black men is not very positive.

Lt. Richard W. Collins, III shattered those stereotypes. He was an amazing young man who happened to also be black. He was a newly commissioned Lieutenant, a ROTC candidate for graduation from Bowie State in Maryland. At that graduation Tuesday, Collins was remembered by his alma mater during the ceremony as a handsome, gallant, brave and respectful young man of just 23 years of age who his father said had “a loving and giving heart.”

The truth is that we rarely see positive images of our young black sons, and adult brothers wearing their nation’s uniform, graduating from college, smiling with optimism, being happily engaged to a beautiful woman, or living life to the full while celebrating their accomplishments with family and friends.

It’s not that those images do not exist, because they do—and in abundance. It’s just that our national view of black men never allows us to see the positive. It simply doesn’t play to the negative stereotype that we have all become so comfortable with.

His beautiful future was cut short by a crazed, drunk white male college student named Sean Christopher Urbanski who was a member of a Facebook hate group called “Alt Reich.” This horrific incident shows the danger of hate speech masquerading as free on social media.

Collins is the latest victim of a rising tide of racial hate crimes being perpetrated on college campuses and through social media. One of my own sorority sisters, Taylor Dumpson, of Alpha Kappa Alpha Sorority, Inc. was the victim of a hate crime on May 1 after being elected student body President on American University’s undergraduate campus for the first time in history

Students discovered bananas scrawled with short, racially-offensive messages hung from trees and lampposts with the words “Harambe Bait,” a reference to the Cincinnati Zoo gorilla killed last year after dragging a child who fell; another said, “AKA Free,” a shot at the African-American sorority of which the new student government president is a member. American University campus police released video of the act and still have not caught the perpetrator.

If that was not bad enough, two weeks ago in Charlottesville, Virginia a mob lead by avowed white supremacist Richard Spencer marched with torches in the dead of night to protest the removal of confederate statues. They were chanting, “You will not replace us. We have awoken. We are here. We are never going away” and “All White Lives Matter.”