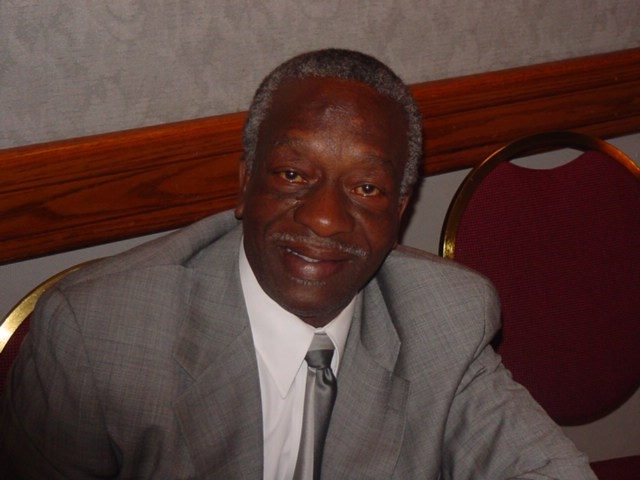 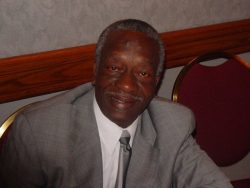 Dr. Clyde Elliott Gaines, Sr. was born on January 3, 1932, in the great city of Houston, Texas to Reverend and Sister Arthur M. Gaines, Sr.  He was always proud to tell everyone that he was from 5th Ward, Texas.  Dr. Gaines graduated from Phyllis Wheatly High School.  Upon graduation he entered Texas Southern University (TSU) and later joined the United States Air Force.  During his stint in the Air Force, he served during the Korean War.  After serving in the Armed Forces, he returned to Texas to continue his education at TSU.

One Sunday during an afternoon service at the Mt. Corinth Baptist Church, Dr. Gaines’ attention was turned towards a shy, beautiful young lady in a wide brim hat, Miss Barbara H. Woods.  He couldn’t resist asking her out, and she soon became his “Keeper”.  On July 21, 1957, the Lord blessed the two to become one and they set their sights on Los Angeles, CA.  To this union, God increased their family with a bouncing baby boy, Clyde Elliott and “The Baby”, Traci Althea.  Yet there still seemed to be a void in the family.

Dr. Gaines was called to the ministry in 1953, and preached his first sermon in 1959 at the Faithful Central Baptist Church, under the leadership of Reverend W.L. Robinson.  The two later united with the New Hope Baptist Church, in Los Angeles, where they faithfully served under the leadership of the late Dr. B.O. Byrd.  It was under this relationship that he learned the generosity of allowing others to share in the ministerial work, and in the kingdom building business.  In 1972, he was called to Pastor the New Hope Baptist Church of Palmdale, California.  He served there for six and a half years before being called to Greater Trinity Baptist Church in San Diego on November 29, 1978.  His installation message was “Glory in the Cross.”

As the fulltime Pastor of Greater Trinity, he energetically led the flock to new heights.  Under his leadership the church’s ministries were increased with a New Member’s Class, Pastor’s and Inspirational Choirs, Scholarship Committee, Sunshine Band, Parent’s Advisory Committee, Dance Ministries, Young Adult Bible Study, Youth and Children’s Bible Study, Wednesday Night Live, and Evangelism Committee.  He led the church in the acquisition of an adjacent property, for the future edifice of GTBC.  Although he will not witness this edifice, the Lord’s vision for GTBC did fall flat on him, as he sacrificially gave towards this effort on a consistent basis.

August 2, 1986 was an exciting day, for more than one reason.  It was a dual celebration for the Gainesfamily.  Clyde Elliott II turned “21”, and Brenda Lynette was reunited with the family, assuming her spot as the oldest daughter.  Dr. and Sister Gaines, along with Clyde and Traci were ecstatic over the fact that Brenda found them.  That void that was previously felt was no longer present.  The family was made complete.  What a mighty God we serve!

Dr. Gaines was a true patriarch and led his family with strength, support, and an abundance of love.  Next to God, his family was everything to him.  It was his life’s mission to be the best provider that he could be….and that he was!  He made sure that his family wanted for nothing and that they had the best of everything, including his love.  No matter how big the problem seemed, he would always say that it was going to be okay.

While there is much that can be said about this powerful man of God, we cannot neglect to mention his incredible sense of humor.  Dr. Gaines could be found cracking jokes in almost every situation.  He believed that laughter was medicine for the soul and that even laughing at oneself was an important thing to do.  One of his favorite jokes was to pretend as if he couldn’t hear something you said, and you would find yourself repeating your statement or question over and over until he laughed.  The sound of his laughter will truly be missed.

This gentle giant was truly one of the most generous soul’s alive.  On any given day, he could be found reaching into his pocket and offering assistance to someone in need.  He would often say, “You never know when it may be your turn”.  He adopted many children that affectionately called him, Dad, Pops, or Papa.  He loved each of them and treated them as if they were his own.  Helping others was one of his gifts and doing so brought him tremendous joy.  He also took great joy in lifting up the name of Jesus.  He loved to fire up a service and shout about how good God had been to him.  He was not ashamed of the Gospel and never let anything keep him from magnifying His holy name.  Dr. Gaines’ commitment to the Lord was evident and sincere.

Dr. Gaines has accomplished much in his ministerial career, locally, in the State and Nationally.   He served as the President of the Baptist Minister’s Union, Moderator of the PBDA, Moderator Emeritus of the PMBDA, President of the CMBSC, President Emeritus of the CMBSC and Vice President of the Foreign Mission Board in the National Convention of America.  He led a tour to the Holy Land, helped build a church in Belize, facilitated numerous Bible-based classes, led revivals, baptized the saved, christened the innocent, eulogized hundreds and married countless couples, the last on the eve of his transition.  Dr.Gaines’ spry attitude kept him active and committed to always furthering the work of the Lord.