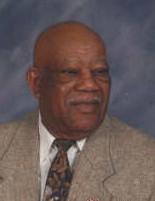 Funeral services were held on 09/15/2022 at Calvary Baptist Church, with a burial following at Miramar National Cemetery. Final arrangements were entrusted to Anderson Ragsdale Mortuary.

Paul McKee was born September 2, 1926, to the proud parents of Margie and Sam McKee. Paul joined the Georgiana Baptist Church, where he loved to sing and praise God.

Paul completed his formal education in Georgiana, AL. After graduating from high school, Paul moved to San Diego and enlisted in the U.S. Navy for 20 years. Paul met and married Marguerite. Two children were born into this union; both sons preceded Paul in death.

Paul was employed at Union Bank for 20 years, where he was a painter. Paul was a devoted worker. He was always a happy person and was always treated with dignity and respect. Paul united at Calvary Baptist Church and was a faithful member for over 40 years. Paul was an awesome Sunday School teacher and served on the Deacon Board for many years.

Paul also served as a VP officer in the San Diego District Association of the California State Missionary and National Baptist Convention and was a devoted member of the Brotherhood. He became part of the Hospitality Committee, where he served as the Chair and Head Chef. The Social Hall is named “The Calvary Baptist Church Paul McKee Social Hall.”

After retirement from Union Bank, Paul then spent more time at Calvary. All his attention was at Calvary, where he was a full-time chef. Paul filled in with anything he could that was needed at the church.

On August 29, 2022, Paul received his wings to fly on to heaven to greet God and his loved ones, who were waiting at the gate of heaven. Paul’s wife, Mary Jane; his 3 Brothers, Claude, Artis, and Pete; his 3 sisters, Fannie Willie Mae and Louise; and one stepdaughter, Mignon, all preceded him in death.

Paul leaves to cherish his memories, his stepdaughter Monique (Fred) Manfred; grandchildren, Antoinette, Danielle, and Devon; and a host of his Calvary Family and friends to mourn his passing. Paul will be greatly missed!