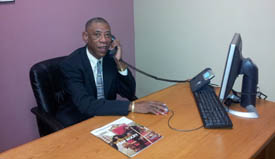 Urban Network Digital (UND) will be teaming up with Amalgamation Magazine to host its “Back to Basics: Music and Entertainment Summit 2014” May 1-4 in San Diego for the first time since its introduction in 1988.  This event will be monumentally beneficial for anyone who is remotely connected to the music industry, and UND’s president, Arthur Mitchell, tells why.

“Say you’re a parent and you have a kid that’s trying to be in the music industry, you don’t want that kid to get ripped off or be like many African-American artists who’ve sold millions of records and walk around broke.  Be it they didn’t get the publishing or signed bad deals, by going to the conference you’ll learn what a record deal is supposed to be like,” said Mitchell, who went onto say, “you’ll learn what a manager’s responsibilities are.  If you’re a promoter, you’ll be able to network with people in the music industry who’s got the talent.  If you’re an artist and you want to understand how to market and promote yourself” then it would behoove upon you to attend the summit.

Mitchell, who has been living in San Diego for 30 years, started in the music industry in 1992 when he established an independent label called Deemo Records who went on to sign a lot of local talent, which includes R&B singer Harold Whaley.  During his time running Deemo, he heard about Urban Network, who at the time was holding their music summit in Palm Springs, and someone suggested to him to attend in 1994 “and my whole world changed as far as the music industry and how it worked and what it does,” Mitchell said.  “[Deemo was] really struggling like crazy in San Diego.  We couldn’t get on the radio stations; doing all that we could possibly do and we were hitting our heads against a brick wall.  It was frustrating.”

However, by attending the summit he was able to learn how radio and distribution worked, as well as how to package CDs and what record labels are actually responsible for.  “I had spent $500,000, wasted it basically, trying to do music and be a label independently, and the reason I wasted all of that money was because I didn’t know.  I didn’t have the knowledge; everything that I thought was wrong.”   Mitchell says that it only cost him $2000 to attend the Palm Springs summit and “if I had known before what I knew after going to Urban Network, I could’ve saved myself $498,000.”  The proof in is the pudding, as the old saying goes.

The UND summits are responsible for not just teaching what the music industry is about, but for discovering some major names currently in the game.  “Some of the biggest artists in the world got their start at our summit.”  Artists such as Beyonce and Destiny’s Child, Ludacris, Rick Ross, Mary Mary, R. Kelly, Will Smith, Boys II Men, and Kelly Price have all performed at the UND summits before anyone really knew who they were.  “We put together a platform and bring all the people that you need to get in front of in order to get to that next level, and if you try to do that by yourself, it’s cost prohibitive.”  Performing at the summit is open to anyone at any level in their music career so do not be discouraged by seeing major names because you or someone you know could very well be next.

UND’s summit also boasts an opportunity for local artists to be seen.  There will be showcases each day of the summit for gospel, hip-hop, R&B, and jazz that are open for sign-ups.  There will be a representative from every major record label, such as Leonard J. Thompson III, president & CEO of M.A.N.A.D.A.T.E. Records Inc, in attendance so artists can be seen by the right kind of people to get them going in the right direction.  In order to be on the showcase an artist will have to submit their music ahead of time, and then they would have to either sponsor themselves or get someone else to sponsor them, and pay a fee where they will in turn get six minutes to perform.  It’s not too much to ask if one is serious about their craft and can see the bigger picture.

“If you don’t have the right relationships in this industry, if you don’t know the right people, if you don’t have the knowledge of how it works, you will not be successful.  Talent alone is not enough.  Posting your music on Facebook is not enough, putting a video on YouTube is not enough,” Mitchell emphasized.  The basic gist is that it’s imperative to an upcoming artist’s career to attend the summit and get all the knowledge they can.  San Diego is privileged to get to the honor of hosting this year’s summit, and had it not been for Mitchell, it wouldn’t have happened here.

San Diego isn’t exactly known for its music scene.  Although everyone knows someone who is talented beyond measure, it’s hard for anyone to make it out of San Diego because the resources aren’t here.  That’s the reason why Mitchell insisted that the summit come here in order to shine a light on San Diego’s hidden gem of a music scene, so we can potentially get on a level like Los Angeles or Atlanta.  Or at the very least, get those who are truly trying to make it in front of someone other than their peers.

The “Back to Basics: Music and Entertainment Summit 2014” will be held May 1-4 at Four Points Sheraton located at 8110 Aero Drive, San Diego, CA 92123.  Visit UND’s website at www.urbandigitalnetwork.com for information about daily schedules, ticket prices, as well as showcases.