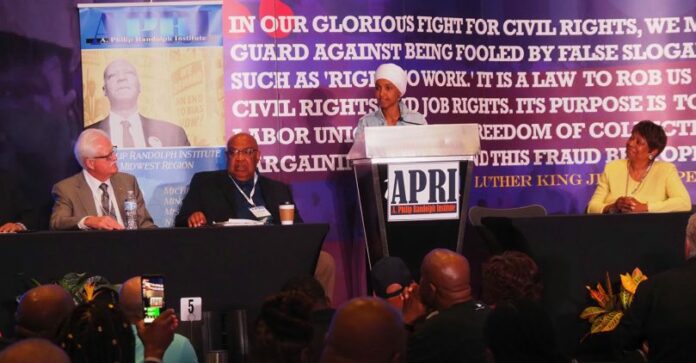 MINNEAPOLIS – Minnesota Congresswoman Ilhan Omar (D-MN) addressed members of the A. Philip Randolph Institute last week in Bloomington, Minnesota, near Minneapolis. APRI is one of the nation’s largest organizations of African-American labor union leaders and activists.

Rep. Omar invigorated the crowd that came out to the conference with her proclamation of continuing her fight despite multiple death threats and critique on the national level. Omar also ensured that she has no intention of bowing down to the current administration.

“If someone needs you to down on a knee to make themselves feel tall, then there’s something wrong with them, not you,” Rep. Omar said. “I got in this ring because I’m ready to fight.

The A. Philip Randolph Institute held its 50th Annual National Education Conference on August 7 -11, 2019 at the Radisson Blu Mall of America Hotel.

Hundreds of national and local labor union activists, celebs, political and civic engagement leaders took part in the conference including Actor Danny Glover and Sirius XM talk show host Joe Madison. Madison known as “The Black Eagle’ did an interview with Mrs. Jacqueline Jackson, wife of civil rights icon, the Reverend Jesse Jackson and her son Jonathan. Mrs. Jackson is the author of the book “Loving You, Thinking of You, Don’t Forget to Pray: Letters to My Son in Prison,” a collection of letters she wrote to her son Jesse Jackson Jr.

APRI National President Clayola Brown said the group is working to build awareness and drive community engagement to find solutions to social and racial injustices. “As we know from the 2018 elections, APRI activists and our allies have been fundamental and essential to educating, organizing and moving political and legislative victories,” Brown said. With increased education, measurable programs, strong community partnerships, and organizational development, we will recover, and we will advance,” Brown said.