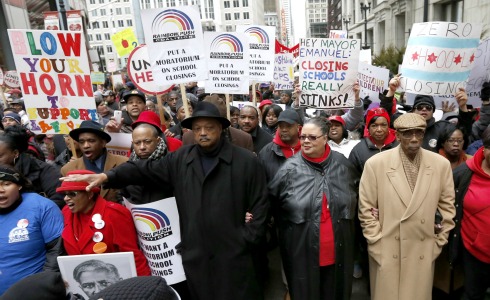 Hundreds of teachers, parents and other opponents marched through downtown Wednesday, vowing to fight a plan to close 54 Chicago Public Schools, despite Mayor Rahm Emanuel’s comments that he’s done negotiating and the closings are essentially a done deal.

Emanuel and schools chief Barbara Byrd-Bennett say the nation’s third-largest district must close dozens of schools because CPS faces a $1 billion budget shortfall and has too many schools that are half-empty and failing academically.

At a rally before the march, Chicago Teachers Union President Karen Lewis called the closings “injustices” and said lawsuits are planned. Other speakers called for state and federal lawmakers to intervene.

“There are many ways that you can show that this is not over,” Lewis told the protesters, whose march filled the street and stretched a full city block. “On the first day of school you show up at your real school. Don’t let these people take your school.”

Stopping in front of City Hall, the protesters chanted “Save our Schools” and called for Emanuel’s ouster. More than 100 people who had planned to be arrested sat down in the middle of the street, where they continued chanting until police cleared them from the area and issued citations.

Retired teacher Gloria Warner, 62, was among those sitting arm-in-arm with other protesters in the roadway, which was blocked off to rush hour traffic.

“We need the mayor and CPS to invest in our schools, not take them away,” the grandmother of two CPS students said. “We need our schools for the safety of our children.”

A group of Chicago ministers also went to City Hall on Wednesday to deliver a letter asking Emanuel to halt the plan.

CPS and the mayor say the closings will save the district $560 million over 10 years in capital costs and an additional $43 million per year in operating costs. About 30,000 students — almost all of them in Kindergarten to eighth grade — would be affected.

At a press conference on an unrelated topic Wednesday, the mayor said he and Byrd-Bennett already are working out how to carry through on a pledge that every child who is moved ends up at a higher quality school. He said the closings already have been delayed too long.

“Keeping open a school that is falling short year-in and year-out means we haven’t done what we are responsible for; not what our parents did for us and what we owe every child in the city of Chicago,” Emanuel said.

Critics say the closings disproportionately affect minority neighborhoods and will uproot kids who need a stable and familiar environment in which to learn. They also worry that students will have to cross gang lines to get to a new school, and that the vacated buildings will be blight on already struggling communities.

Jonathan Hollingsworth III, a lunchroom manager at CPS, said he’s also concerned that the plan will leave hundreds of workers jobless. He said he voted for Emanuel but won’t do so again.

“He’s downsizing everything in the damn city. It’s take it or leave it,” Hollingsworth said. “Keep this in mind: Come election time, all of these people will have the last laugh.”

Opponents of the plan will get another chance to argue their case at a series of public meetings that will be scheduled in coming weeks, though the Chicago Board of Education — whose members are all appointed by Emanuel — is expected to approve the closings in late May.

The closings would take effect beginning at the start of the 2013-2014 school year.