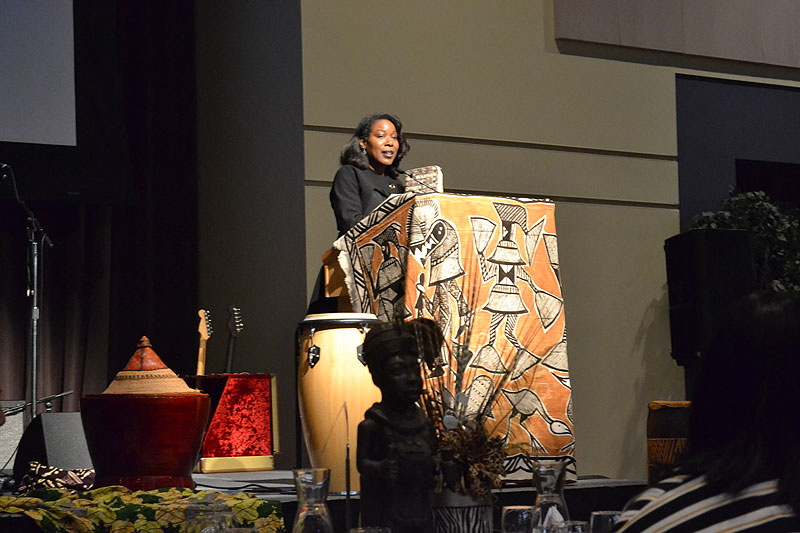 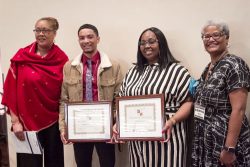 The Price Center Ballroom West was abuzz with a live musical performance by the Wildside Band, and attendees enjoyed a silent auction and a Southern-style soul food brunch.

Student scholars, Malik Gilbert and Denasia Gaines were awarded the UJIMA Network Black History Month Scholarship, awarded in honor of Dr. Joseph Watson and Mary S. Watson. Gaines, an Ethnic Studies major from the Thurgood Marshall College said she was grateful to others who, she said, “saw the potential in me as a young black woman.” She said she felt affirmed in her passion to serve her people and community. In her studies at UCSD, the Lincoln High School alum conducted research on the School-to-Prison-Pipeline and the Prison Industrial Complex.

Malik Gilbert, and Ethnic Studies and Political Science major, brought the entire ballroom to a silent pause as he described his past as a homeless youth, less than 3 years prior to his receiving his award. He spoke of the lack of access to student of color at the UCSD campus, noting the low number of African American students who matriculate through UCSD. He asked that the university, “please do better.” Ultimately though, Gilbert said, “I’m grateful to be awarded this scholarship by people so wise and inspirational.” 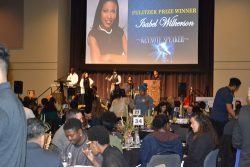 “The young men and women here don’t just represent African Americans, but the best of UC San Diego, said Chancellor Pradeep K. Khosla. While he acknowledged the university needed to “do better, faster’ in regards to African American student enrollment, the chancellor noted the Black Excellence Initiative as UC San Diego’s dedicated response to the issue and that the university was ‘proud of making progress.”

The high point of the day was Pulitzer Prize Winner Isabel Wilkerson, who devoted 15 years to the research and writing of “The Warmth of Other Suns,” interviewing more than 1,200 people, unearthing archival works and gathering the voices of the famous and the unknown to tell the epic story of the Great Migration. Wilkerson, with her passion and depth, mesmerized the crowd. She spoke on the universal nature of her book and recounted the history of how African Americans, after fleeing the ‘arcane caste system established in the American South,” escaped to freedom within their own country by migrating to northern and western U.S. cities like Pittsburgh, Detroit, Chicago, Los Angeles, San Diego, and as far as Alaska.

To use Wilkerson’s words, the UC San Diego Black History Scholarship Brunch brought to all a ‘portal to understanding’ the Great Migration experience and a great chance to celebrate the hard work of the student scholars.