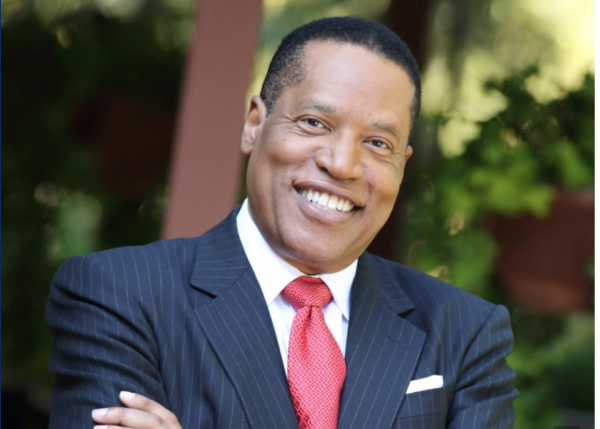 Until recently, Gov. Newsom’s strategy for responding to the litany of attacks he’s received from Larry Elder, the Republican frontrunner in the upcoming Sept. 14 recall election has been to not respond directly to them.

Newsom’s responses have focused on his accomplishments, indirectly alluding to Elder’s attacks, and especially warning voters that if Republicans succeed in the recall Trumpism would be in charge of the state.

But a little over a week ago, as Newsom spoke before phone bankers at Hecho En Mexico restaurant in San Jose he brought up a number of Elder’s positions that clash with the views of a majority of Californians.

Elder, a former lawyer and Los Angeles-based conservative talk radio host, is opposed to a minimum wage. He is skeptical about climate change. He supports school choice and offshore drilling. He is against school mask mandates and would eliminate vaccination validation and mandatory testing for those who are not vaccinated.

Last week, Newsom’s campaign released an ad that features a picture of Elder with Trump.

Elder has pushed back on the association with Trump. “The idea that they’re trying to characterize my campaign as some sort of extension of you-know-who is unfair to me,” Elder told ABC’s Eyewitness News. “I am an insurgent candidacy – 1.7 million Californians signed the recall petition. A quarter of them were Independents and Democrats who voted for the man just two years earlier.”

Regarding Trump and the legitimacy of 2020 presidential election, Larry Elder flipflopped after he told the Sacramento Bee’s editorial board on Aug. 2 that he did not believe that Joe Biden stole the election. Later, on his talk radio show “The Morning Answer,” after receiving backlash in conservative circles for disagreeing with Trump, Elder changed his tune. He claimed the Sacramento Bee sound bite had been edited.

“So, do I believe that there were all sorts of shenanigans in the election? Absolutely. But Joe Biden is sitting there in 1600 Pennsylvania Avenue and Donald Trump is in Florida so let’s just move on and try to figure out what we can do to win in 2024,” Elder said.

Elder blames Newsom for California’s homelessness crisis and the unaffordable housing market. According to him Newsom is responsible for unreasonable COVID-19 restrictions and heavy-handed environmental regulations.

Recently Elder went toe-to-toe with progressive radio host Tavis Smiley, who broadcasts from KBLA Talk 1580 in Los Angeles. Smiley challenged Elder on his opposition to reparations for African Americans for the atrocities of slavery and the financial losses Blacks suffered due to Jim Crow laws and systemic racism.

“Systemic racism is not the problem,” Elder said. Instead, he blamed “the welfare state, which, he says, is the reason “the Black family unit” has been torn apart.

While Elder conceded that statistics on fatherless Black family units could have been largely due to the after-effects of chattel slavery and Jim Crow laws in the past, he does not think those factors are relevant to the discussion today.

Elder has long held the position that the racial wealth disparity is mostly concentrated at the top of America’s wealth pyramid and is therefore not indicative of systemic racial bias.

Lately, Elder’s campaign has been on the defensive. He is being investigated by the California Fair Practices Commission (FPPC) about his candidate disclosure form. His Republican opponents have joined Newsom and the media asking him to explain past controversial statements he has made and he has responded to questions about what he’s said about Blacks, women, climate change, and other topics – not explicitly defending or denying them.

Among the most damaging has been revelations made by his ex-fiancée Alexandra Datig, a former high class call girl who worked for Hollywood madam Heidi Fleiss. Datig accused Elder of verbal and emotional abuse, including intimidation with a .45 revolver gun.

Elder has denied Datig’s allegations, calling them “a distraction.”

In the face of growing scrutiny, Elder insists that his opinions and convictions about issues facing Black people in America are all his own and not the regurgitated talking points of a controversial president (Trump).

“A lot of people bring up systemic racism since I’ve been campaigning, and I find it really bizarre. America has never been less racist than now,” Elder said in a conversation with Eyewitness News.