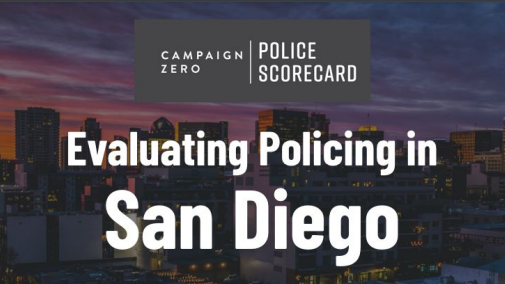 Campaign Zero, a non-profit organization that researches and analyzes policing practices across the U.S., presented its report on San Diego policing to the City Council on April 13, 2021. The report revealed disturbing but unsurprising data about the San Diego Police Department (SDPD) and the San Diego Sheriff’s Department (SDSD)–out of 37 California state departments, both SDPD and SDSD were shown to use the most force against civilians over any other department.

According to Campaign Zero, there were 116,180 traffic and street stops from July to December 2018. The data from those incidents shows that black residents were stopped at a 3x higher rate than white residents, with Latinos, Asian people, those with disabilities, and members of the LGBT+ community also being excessively stopped at lower rates. Moreover, data shows that the SDPD and SDSD were more likely to use force against black residents and those with disabilities over any other groups. Campaign Zero also found that when civilians came forward to report police misconduct, they were often ignored or dismissed; “Of 226 civilian complaints of San Diego Police Department conduct in 2016 and 2017, only 11% were ruled in favor of civilians”.

The data reveals the stark reality for many San Diegans who have been affected by biased policing. Over an hour of public comments showed how much the residents want change within the policing practices of SDPD and SDSD. Genevieve Jones Wright, the executive director for Community Advocates for Just and Moral Governance (MOGO), said “today you were presented with more facts confirming what we’ve known for decades regarding the disparate treatment by police officers of black people and others. The question today is what are you going to do with that information going forward?”

Campaign Zero has some answers for residents in it’s list of policy recommendations for the SDPD and SDSD. Recommendations range from restricting the use of tasers to expanding alternatives to arrest for low level offenses. Councilmember Monica Montgomery-Steppe, who helped get this presentation in front of the City Council, spoke at the end and shared an experience on how the data found by Campaign Zero has affected her.

“I can’t help but sit here and think about my journey, that about 5 years ago, I was a staffer in a district office where one of these studies was presented. And I decided to leave that office based on comments that were made by my former boss. I do get emotional about it because the same things still hold true in San Diego, I believe that we have made progress…but there is still so much work to do and I am completely and utterly committed to doing that work.”

To view the full report and list of recommendations by Campaign Zero, visit https://www.joincampaignzero.org/sandiego