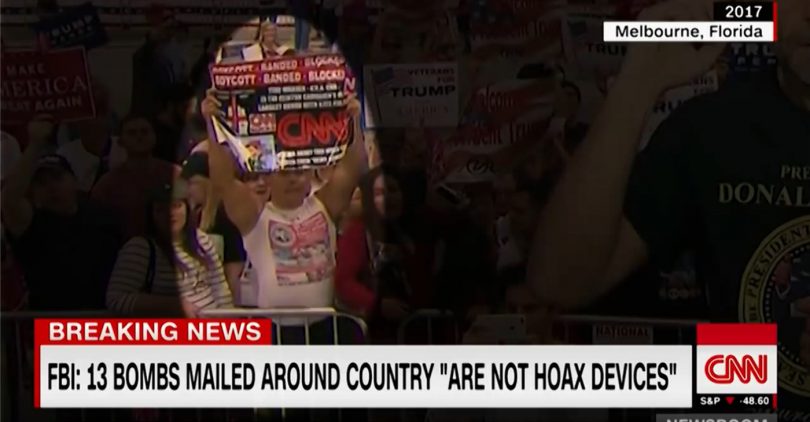 Wray reportedly told senators that “about 1000” cases of domestic terrorism were currently being investigated and that that was approximately the same as the number of cases related to Islamic terrorism under investigation.

The report comes on the heels of the arrest of Cesar Sayoc, a White American male from Aventura, Florida, who has been charged with five Federal crimes, including mailing an incendiary device and threatening a former president. Sayoc was arrested at an auto parts store in the nearby city of Plantation, Florida.

Charges stem from his alleged construction and mailing of 13 explosive devices to prominent Democrats, CNN and others who have been vocal in their opposition to President Donald Trump, according to Attorney General Jeff Sessions. Federal investigators confirm that Sayoc is a staunch supporter and defender of President Trump and the policies of his administration. In a statement following the arrest, Sessions described Sayoc’s crimes as “political violence or the threat of violence,” saying that such crimes are “antithetical to our vigorous system of self-government.”

A nationwide manhunt for the bomber was initiated as former Presidents Barack Obama and Bill Clinton, former Vice President Joe Biden, and former Secretary of State Hillary Clinton headed the list of those who have been sent pipe bombs and other suspicious packages through the mail.

It’s that kind of violence from avowed white nationalist that has statistics revealing the level of activity being equal or even surpassing that of ISIS.

“I don’t think I’ve ever heard anybody suggest we should be reasonable and talk to ISIS. There’s a fascination with white supremacists, or maybe an ingrained belief that white equals good,” said former world kickboxing champion and Oscar-nominated director, Lexi Alexander.

Duane Anthony, the host of the Mark My Words Sports Show, added that, “I may not have a big of a voice on here yet but when I see white supremacists do things that no one in history has done and create online cells that make ISIS envious, it makes me worry for our people. We need to wake up.”

According to the new report, independent data reveals that the number of attacks carried out and planned by white supremacists is almost double those undertaken by Islamists.

Some senators reportedly have complained of a double standard in how the different threats are dealt with and California Democratic Sen. Kamala Harris (D-CA) has asked for committee hearings on the matter.

According to Senator Claire McCaskill (D-MO),not a single committee meeting has been held on the threat posed by domestic terrorism, despite the fact that attacks carried out by white supremacists are “almost triple” those carried out by those who identify with a jihadist movement.

Meanwhile, Trump has embraced his self-designation as a “nationalist.”

In the Oval Office Trump reportedly brushed off concerns from critics that he is sending a “dog whistle” to his base, that what he really means is that he’s a “white nationalist.”

“I love our country. And our country has taken second fiddle,” he said.