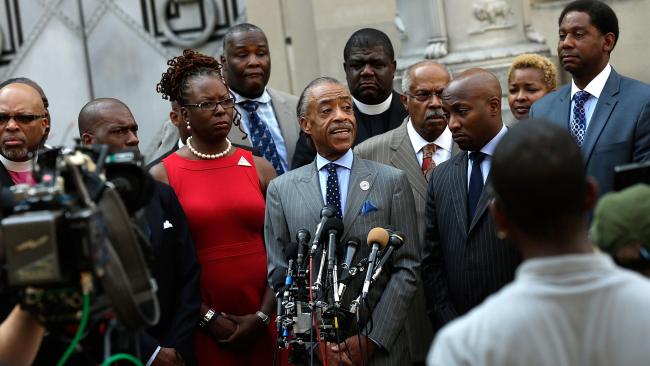 MIAMI (AP) — Civil rights leaders are planning vigils and rallies in 100 U.S. cities this weekend to press the federal government to bring charges against a former-neighborhood watch volunteer acquitted in the killing of an unarmed black teenager.

George Zimmerman had been charged with second-degree murder in the fatal shooting of 17-year-old Trayvon Martin last year, but a jury of six women found him not guilty of that charge as well as the lesser charge of manslaughter.

“People all across the country will gather to show that we are not having a two- or three-day anger fit. This is a social movement for justice,” Rev. Al Sharpton said Tuesday as he announced the plan outside the Justice Department in Washington, D.C.

The rallies and vigils will occur in front of federal court buildings at noon Saturday in cities including Los Angeles, Chicago, Philadelphia and New York.

Martin was visiting his father and returning to the home of his father’s fiancée in a gated community in Sanford, Florida, after a trip to the store when Zimmerman identified him as a potential criminal. The neighborhood watchman fatally shot Martin during a physical confrontation in February 2012.

Martin was black, and Zimmerman identifies himself as Hispanic. Zimmerman was not arrested for 44 days, and the delay in charging him led to nationwide protests from those who believed race was a factor in the handling of the case.

Sharpton says vigils will be followed by a conference next week in Miami to develop a plan to address Florida’s “stand-your-ground” law. The law gives people wide latitude to use deadly force if they fear death or bodily harm.

U.S. Attorney General Eric Holder said such laws, which exist in many states, need to be reassessed.

“Separate and apart from the case that has drawn the nation’s attention, it’s time to question laws that senselessly expand the concept of self-defense and sow dangerous conflict in our neighborhoods,” Holder said during a speech before a convention of the NAACP civil rights group.

Meanwhile, protests over Zimmerman’s acquittal have broken out as far away as California, where rallies were small and calm Tuesday night. In Los Angeles, police had vowed to crack down with quick action to prevent a recurrence of the vandalism and violence the city saw on Monday night in street protests.

The Justice Department has said it is looking into Martin’s death to determine whether federal prosecutors will file criminal civil rights charges against Zimmerman, who is now a free man.

The key to charging Zimmerman lies in whether evidence exists that he was motivated by racial animosity to kill Martin. While Martin’s family has said the teen was racially profiled, no evidence surfaced during the state trial that Zimmerman had a racial bias. Zimmerman maintained he acted in self-defense. He claimed Martin was slamming his head into the concrete sidewalk when he fired his gun.

Zimmerman’s friends and family have repeatedly denied he harbored racial animosity toward blacks.

One of the jurors in the case — known only as Juror B37 because their identities have not been released — said in an interview with CNN’s Anderson Cooper Monday that she did not believe Zimmerman followed Martin because of his race.

Juror B37 said the actions of Zimmerman and Martin both led to the teenager’s fatal shooting last year, but that Zimmerman didn’t actually break the law. She said Zimmerman made some mistakes, but that she believed Martin struck Zimmerman first and that the neighborhood watch volunteer had a right to defend himself.

Juror B37 said the jurors were initially divided on Zimmerman’s guilt, with three jurors believing he was guilty of either manslaughter or second-degree murder, but that the jury agreed to acquit him after studying the law.

Four other jurors issued a brief statement on court stationary late Tuesday saying that the opinions expressed by Juror B37 in the TV interview “were her own, and not in any way representative of the jurors listed below.” It was signed by Jurors B51, B76, E6 and E40.

The four other jurors said in their statement that Martin’s death weighed on them.

“Serving on this jury has been a highly emotional and physically draining experience for each of us,” the statement said. “The death of a teenager weighed heavily on our hearts but in the end we did what the law required us to do.”

They also made a request for privacy. The court has not released the names of the six-woman jury, which included five whites and one woman who appeared to reporters to be Hispanic.

In a statement to CNN released Wednesday, Juror B37 said she prayed for those who have the power to modify laws that gave her “no verdict option other than ‘not guilty’ in order to remain within the instructions.”

Associated Press writers Curt Anderson in Miami, Mike Schneider in Orlando and Shaquille Brewster in Washington contributed to this story.