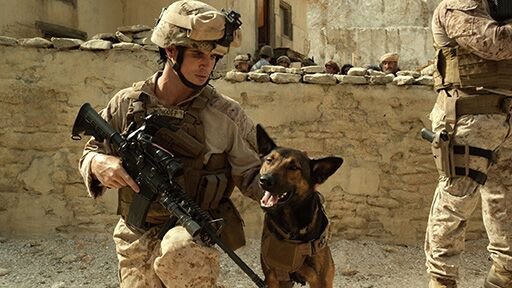 For many movie viewers, the breakout star of the GI Film Festival, held in San Diego last week, was a courageous and charismatic veteran named Max. Turns out Max is a service member of the canine variety, and a highlight of the film’s screening, which was held aboard the USS Midway Museum, was a guest appearance by the dog that portrayed Max, a Belgian Malinois named Jagger.

OJ Knighten, who accompanied Jagger to the screening, along with the film’s writer Sheldon Lettich, is one of three expert trainers who worked behind the scenes during filming, to create the action-packed drama, which is filled with gripping scenes in war-torn Afghanistan and rugged terrain back in the United States. Most would agree Jagger’s performance was Oscar worthy. But behind the Hollywood glitter is a real story that truly honors the four-legged veterans and their handlers.  Ultimately the Warner Bros. movie, currently available on DVD, tells a story of loyalty, courage, and resilience, following Max, whose Marine handler is killed in action in Afghanistan. After the loss of his best friend, Max experiences a kind of post-traumatic stress, and is returned to the United States.  With seeming uncontrollable aggression, he is on the verge of being euthanized when a connection is established between him and the Marine’s younger brother. He is taken in by their family, and, here, we follow the journey of both Max and the family as they try to rebuild their lives.

Children and adults alike gathered in awed admiration of Jagger at the screening, as he posed handsomely, offering his paw and holding his leash on command. Knighten is low key and at ease in conversation, but when handling his canine charge, his demeanor turns keenly alert and observant, reminding those who wish a photo with Jagger to approach slowly and gently. Knighten, with over 20 years of experience in training, competition and rehabilitating dogs, is well versed in the Belgian Malinois pedigree, which, because of its protective personality and skill in agility, search and rescue, tracking, and obedience, has become the breed of choice for police and military work. “They are a great breed, but they are working dogs, which means they need a job, a physical job that challenges them. They are not the ideal breed for the average person.”

Knighten is a wealth of common sense and expert information when it comes to the dog world. “We try to humanize the animal when we need to try to understand and deal with and the dog in his language,” an idiom he calls “Doglish,” a term that brings a laugh but is grounded in truth. A dog can speak to you in many ways, Knighten says, “for example, in posture, or he can growl, he can nip and push.” But such actions don’t necessarily indicate an aggressive dog that can’t be trained. “Dogs are better trainers of us than we are of them,” he reasons. Understanding the context of a dog’s behavior combined with knowledge of the particular breed are necessary skills in being a responsible pet owner, he says.

Such knowledge combined with a well-honed facility for working with animals paved the way for his work on “Max,” along with animal coordinator Mark Forbes and co-trainer Mathilde de Cagny. “The dog must have the right temperament for the role,” says Knighten, adding that it took a nationwide search and over a month of evaluation to find the best dogs for the film. Three months of shooting in North Carolina, with canine play fighting, lunging, knocking people down, climbing walls, and racing jack rabbit-like through dense underbrush required unimaginable concentration, and every scene was performed brilliantly. In a movie of this type, with Max in almost every scene, multiple dogs were cast,  among them Jagger, who made his appearance in San Diego.  Carlos, a 3-year-old Belgian Malinois with high energy and agility training, was the main character dog, “the face of Max,” explains Knighten.  His unique light face markings helped him cinematically, and each of the other acting dogs was carefully dyed to match his coloring. One of Knighten’s own personal dogs, Dude, was used for many of the stunts and his Malinois puppy Blitz was featured in some flashback scenes that showed Max when very young.

What goes on behind the scenes to prepare these dogs for the grueling schedules and intense focus that is necessary, especially in scenes with explosions, gunfire, chases through rough turf, and “fights” with other dogs? A big part of the job is finding ways to make it fun for the dogs, says Knighten. Treats are used for motivation, along with praise, and exposure to new stimuli. One of the most challenging aspects of the training was the fight scenes, he offers. The dogs had to be seen as fighting, but in reality, they were engaged in an intense form of play. One of the scenes in particular has Max fighting off two Rottweilers, with one of them rolling down a steep hill.  “There was never a fight,” he explains, and extra care was given to ensure no animals were hurt.  “It’s all about play and rewards,” he says, adding that he was constantly on alert himself to jump in if the play got too rough. “You must have the right temperament for the dog as well as the handling skill to make the dogs feel safe.” 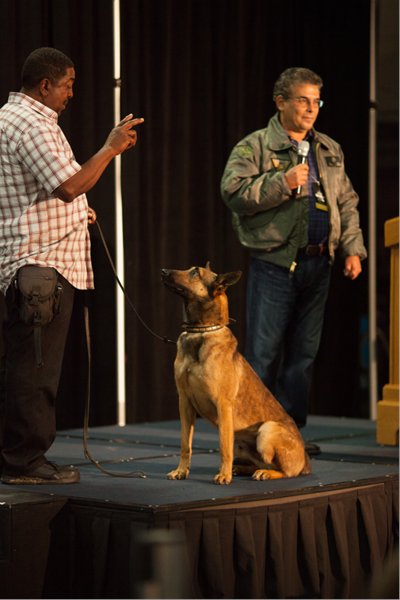 Knighten’s own love for animals goes back to his childhood in Amarillo, Texas, when enjoyed going hunting in the woods with his cousins and their dogs. He realized early on that he had a gift for training, especially working dogs, and has turned his gift into a full time passion.  His OJK9Coach facility in Los Angeles trains people and dogs from southern California and beyond, specializing in rehabilitating dogs that show aggression. His K9CoachRescueRehabilitationPlacement facility rescues hard-to-place dogs and provides rehabilitation and training until they are ready to adopt out. His expertise working with Belgian Malinois and other working dogs has made him a sought after handler in the world of film and TV, with some of his recent credits including “Django,” “Straight Outa Compton,” and “Sons of Anarchy.” You can also catch him on episodes of Cesar Millan’s “Dog Whisperer” series.

With his many successes in his work, “Max” was an especially rewarding project for Knighten. Being a part of a film that honors veterans and the dogs who serve our country gives him great satisfaction.  “These dogs are such an asset to our troops. They are faithful, intelligent, with a highly developed sense of hearing and smell. Once trained, they are able to detect explosives and other dangers that humans cannot detect fast enough.” The dogs are heroic,  and, with this film, the public can appreciate and acknowledge what our troops, both canine and human, endure.

Asm. Akilah Weber’s First Bill Pushes California to Be Prepared for Next Pandemic