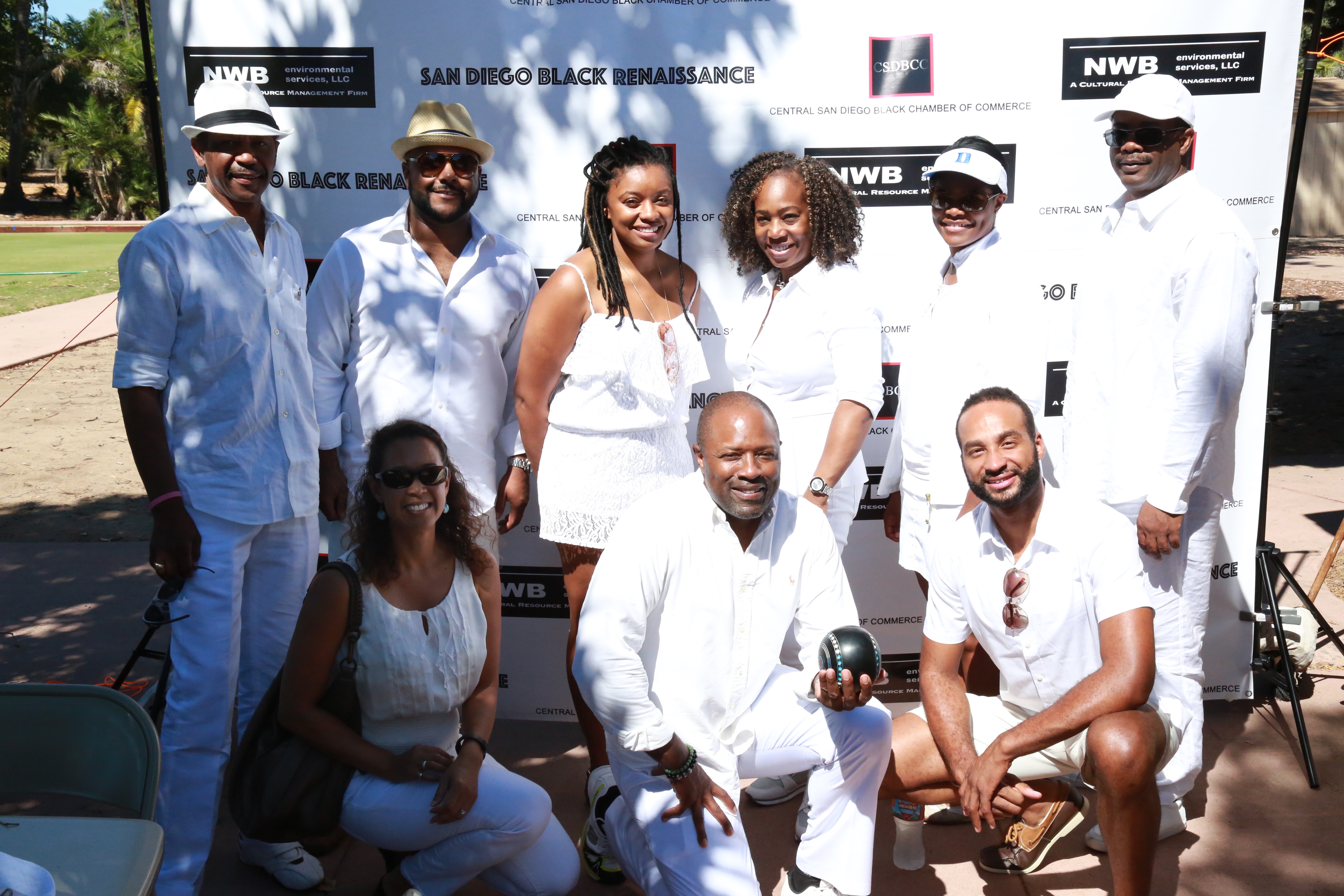 On a sunny Saturday in October, an eclectic group of Black professionals and community leaders—all sharply dressed in white attire—spent the afternoon lawn bowling on the pristine greens of the San Diego Lawn Bowling Club in Balboa Park.

White is the traditional color worn by players of this esteemed outdoor game, which rose to popularity among European aristocrats in the 13th century; in the 14th century, French and English royalty famously banned commoners from playing the game that would become widely known as the “Sport of Kings.” Considering lawn bowling’s guarded noble heritage, as well as the many other long and complex histories of privilege informing Western recreation and leisure, white also happens to be the color of most of the faces seen on lawn bowls in the 21st century.

While it’s certainly rare to see multiple people of color engaged in a lively game of lawn bowling, it is perhaps just as unusual to see a sizable group of Black folks coming together to enjoy any of the world-class cultural institutions located within Balboa Park and throughout the city of San Diego. There’s a new movement underway that’s working to change that perception.

Founded by Michael Taylor, President of NWB Environmental Services, LLC, the San Diego Black Renaissance is an emerging movement promoting Black cultural and economic empowerment through strategic visibility and access within San Diego’s institutions, businesses, and public spaces. “The Black Renaissance,” explains Taylor, “is grounded in the belief that all of San Diego stands to benefit from diversity and inclusion, which drives innovation, prosperity, and progress in all sectors of society.”

The San Diego Black Renaissance draws its inspiration from the Harlem Renaissance, the literary, intellectual, and artistic awakening that transformed Black culture and pride in the 1920s and 1930s. During this pivotal movement, Black self-expression became salient and visible in unprecedented and powerful ways, and the influence of the Harlem Renaissance’s aesthetics and identity politics has been transcendent and far-reaching. “Visibility is its own form of activism,” says Taylor, for whom the power of visibility is as personal as it is political.

For instance, he recently spoke about his career as an archaeologist to a class of third graders at Valencia Park Elementary School in Southeast San Diego. Taylor happens to be one of only two professional Black archaeologists in San Diego, both of whom work for his cultural resource management firm based in Bankers Hill. He stresses “It’s important for Black kids to have the opportunity to see someone with a face that looks like theirs talking about an exciting and atypical career option. This matters to me.”

The significance of this personal and affecting experience speaks to the San Diego Black Renaissance’s mission and visibility tactics, which aim to counter a prevailing culture of invisibility and exclusion predicated on white privilege, and the complex systems of oppression through which privilege is sustained. “People of color often feel marginalized by the cultural institutions and spaces in which they continue to find themselves underrepresented,” says Taylor. In accessing and taking pleasure in these spaces—and in being seen taking pleasure in these spaces—the San Diego Black Renaissance activates the value of diversity and inclusion in the landscapes of everyday life. As Taylor reasons, “San Diego may be America’s finest city, but we won’t know just how amazing San Diego can be until all communities feel equally valued and empowered to engage the city’s first-rate amenities, resources, and natural splendor.”

The San Diego Black Renaissance officially kicked off on October 1st, 2016 at the San Diego Lawn Bowling Club, where Black entrepreneurs, educators, artists, and community representatives came together to enjoy lunch and conversation, to experience something new, and to celebrate the start of a movement in one of San Diego’s most iconic and beautiful public spaces. “I’m delighted to be a part of this new, inspired movement promoting diversity and inclusion throughout the city of San Diego,” said Darnisha Hunter, Community Representative Fourth District and Active Duty and Veteran Family Advocate for Mayor Kevin Faulconer.

Dr. Steven Jones, CEO of JONES and newly appointed President and CEO of the Central San Diego Black Chamber of Commerce (CSDBCC) also attended the kick-off event, sharing “The CSDBCC looks forward to supporting the San Diego Black Renaissance in a spirit of solidarity and optimism for a more inclusive San Diego,” he added, “The central aim and strategies of the San Diego Black Renaissance align powerfully with the Black Chamber’s vision and new growth initiatives, which are designed to expand and leverage the organization’s membership base across all sectors of San Diego.”

In building on all of this inaugural excitement and support, the San Diego Black Renaissance is working on recruiting sponsors for future events, which will span the city’s unparalleled and ever-broadening range of lifestyle offerings, including arts and entertainment, sports, recreation, leisure, the great outdoors, and the city’s dynamic restaurant scene. Where in San Diego County would you like to see more people of color, and why? Readers are encouraged to email suggestions and inquiries to Michael Taylor at mtaylor2613@gmail.com, and are invited to follow the San Diego Black Renaissance group page on Facebook to view photos from the latest happenings around town.

Get Ahead of the Game: Actress Wendy Raquel Robinson Tells Californians “Be Ready for Emergencies”