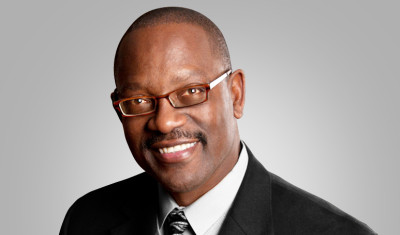 Mr. Floyd A. Smith is a pillar in our community as well as a quadruple threat, being a singer/songwriter, entrepreneur, mentor, and philanthropist. Throughout his life he has been high-stepping his way to greater heights of success, and there’s definitely no stopping him now.
Born and raised in San Diego, as a youth Smith sang in his local church choir. On any given Sunday, one could hear his resounding bass baritone voice adding that rich deep bottom to any song he sang. In the late 1970’s Smith formed a group with his high school friends called “Satisfaction.” The group was well known for delivering outstanding classic R&B harmony throughout Southern California and Nevada.

Charismatic, driven, and passionate about his singing, Smith is the “total package” for live stage performances. As a bass singer, he amazes his audiences with an incredible three octave vocal range. Currently, he is a member of the six-time Grammy Award winning group, The 5th Dimension, whose repertoire includes pop, R&B, soul, and jazz. The 5th Dimension was best known during the late 1960’s and early 1970’s for popularizing the hits “Up, Up and Away”, “Wedding Bell Blues”, “Stoned Soul Picnic”, and “Aquarius/Let the Sunshine In.” Having such a heavy hand in music, as well as having seen many different trends come and go throughout the scene and within San Diego Smith had a lot to say about the current state of San Diego’s Black music scene.

He expressed that there are numerous challenges that are holding many people in the entertainment industry back from success, and one of those things is not working together. “African-Americans spent too much time working against each other. I would love to see San Diego’s music scene more supportive of each other,” said Smith. Another issue that Smith pointed out was that “people are afraid of the youth. Today’s music is more violent and it incites violence,” he said, “when you put anger and hate in music, people respond, and when you are a spokesperson, people will believe the things you say. Back in the day we loved women so much that they were a part of our lyrical content. We need to get back to writing positive lyrics and love one another.” Music has never been the only thing that Smith has had his hands in throughout the years. “I’ve always loved to sing, but my business brain was always working.”
When not performing, Smith pursues his entrepreneur passions by opening restaurants and entertainment venues. Even in his high school years, Smith “always had an entrepreneur spirit,” he says. Smith was one of the first Black owners of a nightclub in Mission Valley called Bogey’s. He was the first Black person to own two nightclubs at the same time, Cynd’s (now known as Tina’s) and Backstage Live. In addition to lending his hand to San Diego’s nightlife, Smith has also owned multiple restaurants, one being Fargo’s BBQ (now Fargo’s BBQ and Jamaican Cuisine Catering and Delivery). Yet entertainment has always had a hold on him.

As an entertainment entrepreneur for over 30 years, he has been recognized as a top promoter of soul, jazz and R&B music in Southern California. “I’m like the ‘Roots’ of entertainment. [I’ve] partied with your grandma, your momma, you, and your kids,” Smith laughed. Currently Smith is a major promoter for events at the Four Points Sheraton near Aero Drive. He also will be helping organize the Music and Entertainment Summit 2014, put on by Urban Network Digital and Amalgamation Magazine, being held there May 1-4. Although Smith is clearly enthusiastic about entertainment and entrepreneurship, he is and always has been incredibly involved in giving back to the community.

A passionate philanthropist, Smith has helped raise over one-hundred thousand dollars for the Lions Club and other various organizations such as Rady Children’s Hospital/Children with Cancer, the Tsunami Victims of Japan Fundraiser, and the Haiti Earthquake Disaster Victims Fundraiser. One of Smith’s favorite volunteer efforts is feeding the homeless of downtown San Diego area. Smith has also done quite a bit of mentoring with some of San Diego’s top names in entertainment, such as Nick Cannon and B. Slade (formerly known as gospel artist Tonéx), before they became who they are today.

Smith is currently touring the nation with The 5th Dimension. He is also working on a solo project entitled “Finally Floyd” and well as an e-book autobiography. For booking information, contact him at floydasmith1@aol.com. Also, visit his Facebook page at www.facebook.com/floyd.a.smith for event promotions.

For more information about The 5th Dimension and their touring schedule, visit www.thefifthdimension.org.