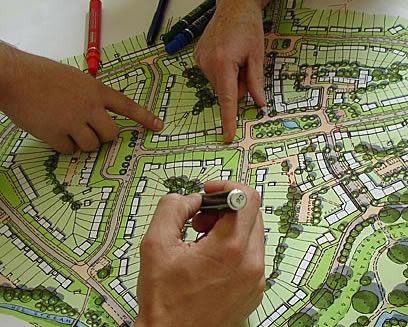 Last Wednesday evening, the Community Budget Alliance hosted a special training to educate residents on the ins and outs of city planning, and how they can take an active role in this process. Held at the Logan Heights Library, San Diego city officials partnered with community leaders in teaching the importance of community planning – an area of concern among the city’s most neglected neighborhoods.

“It begins with a willingness from the community and experts to work together,” said Corrine Wilson of the Center on Policy Initiatives. Wilson provided an overview of community planning and different groups that exist throughout the city. “There are many different aspects that go into a community plan, one of the major pieces being a budget.” Wilson explained how infrastructure, zoning and other factors that play in the placement of everything that forms a community, are pieces discussed at community planning meetings.

Residents, property owners and businesses all have a voice in the planning of a community. “When these groups come together in meetings, the focus is usually on funding and whether or not the community is satisfied with the existing infrastructure. This is where the dialogue and recommendations come in,” said Wilson.

Community planning groups are most active during the summer months, before the city’s budget is finalized. Community planning groups meet from July through September where the foundation is laid on where any infrastructure changes are recommended. From October through January, city staff [councilmembers] convene to analyze and prioritize infrastructure projects to be included for the Mayor’s budget. In March the councilmembers submit their budget priorities and in April, the Mayor’s budget is released. Finally, during the May and June months, the finalized budget is debated and voted on.

Community planning groups meet monthly, and residents, property owners and businesses are all eligible to be elected to that specific board. The chairs of each board representing each neighborhood meet monthly to discuss how their plans relate to one another. “They cross-communicate and contribute to city-wide projects,” said Wilson. The goal of these groups is to bring a complete plan to the city council.

It is important for residents to take an active role in their community planning groups, as they can determine how their neighborhoods and communities are structured. Currently, San Diego does not have a capital improvement plan, but a yearly plan instead.

For a complete list of community planning groups for your neighborhood, visit http://www.sandiego.gov/planning/community/pdf/cpg/contactlist.pdf.