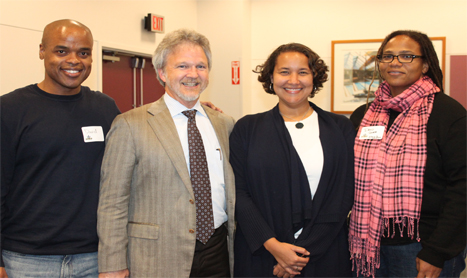 The San Diego State University (SDSU) African-American Alumni Association held a reception Saturday to honor and support the work of one of their own. Dr. Daniel E. Walker, an SDSU alum, entered the San Diego Black Film Festival with the short film, “When Roosters Crow,” the story of famed SDSU professor Dr. Daniel Scarborough. The SDSU African-American Alumni enjoyed an afternoon of fellowship at Spike Africa’s Fresh Fish Grill & Bar before going to watch the film together.
Juscin Pungi, the president of the SDSU African-American Alumni Association, said that it was important for the group to stand behind the film and that the reception created a sense of family and community that the black community needs.

“We need to get together to improve society. One person cannot do something by themselves,” Pungi said.

According to Walker, the writer and director of the film, community was important to Dr. Scarborough. Scarborough was a professor in the Africana Studies Department at SDSU, but he ended up creating an Emmy award-winning dance troupe that included members of the school and the community.

“He never believed in there being a difference between the community and the university so for all of his performances he would always bring in students, people. He was connected to everybody in the community and always believed there had to be a connection, a bridge, between the two. So he is as much a part of San Diego, its history, and anything else as any other figure that you can think of,” Walker said.

According to The Estate Project for Artists with AIDS, “Danny Lyon Scarborough was the founder, choreographer, and director of the San Diego State University Black Repertory Total Theatrical Experience from 1977 to 1987. His obituary in the Los Angeles Times describes him as “a prominent dance maker and unofficial caretaker for black cultural expressions in San Diego.” Scarborough had been an Associate Professor of Africana Studies at San Diego State University. His work was documented in a television special produced by George Andrus for KGTV in San Diego. He received an Emmy in 1978 from the Academy for Television Arts and Sciences in San Diego for his choreography of the program “Roots,” inspired by the Alex Haley novel and TV multi-series of the same name.” (http://www.artistswithaids.org/artforms../dance/catalogue/scarborough.html)

Scarborough died from AIDS in 1989.

Walker spent two years creating the film, and is grateful to SDSU for supporting his project and making it easy for him to film on the campus. While it wasn’t an easy story to tell, Walker says that it was something he knew he had to do to honor the legacy of one of the giants of his alma mater.