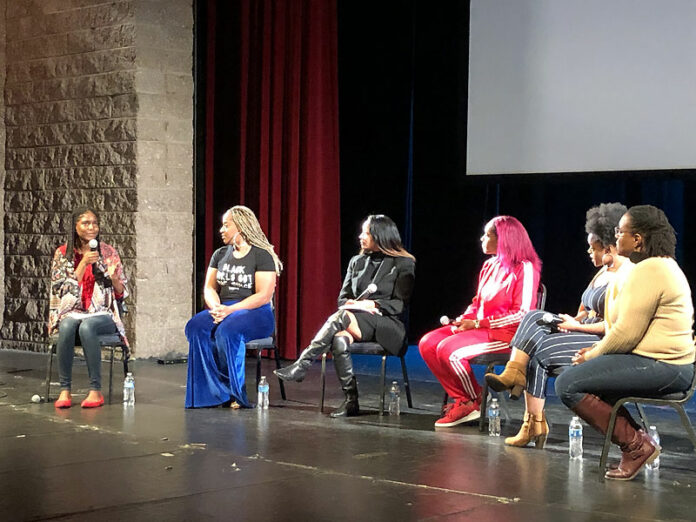 Women from the community, young and old, discuss scholar Monique W. Morris’ “Push Out: The Criminalization of Black Girls in Schools”

Article and Photos by Shea McGee

Vibrant and colorful women gathered in the auditorium of the San Diego Educational Cultural Complex for the screening of scholar Monique W. Morris, Ed.D.’s impactful book turned documentary “Push Out: The Criminalization of Black Girls in Schools. The film is an important documentary regarding the harsh double standards to which young Black girls are ushered into, and how it negatively impacts their future in education and in the world.

The meaningful event was sponsored and attended by Councilmember Monica Montgomery, DETOUR/FANCY Teen Girls, Motivation.In.Action (M.I.A.), March for Black Women SD, The Steppe Family Trust, Electrical Workers Minority Caucus, and Saving Our Starfish as well as people from the community.

During the viewing, young women shared their varied experiences inside the classrooms of today’s schools. Each story shared was heartbreaking, in particular the one shown from 12-year-old Samaya. Samaya shared her experience as a then 7-year-old being singled out from other students, missing out on recess, and punished more harshly than the other children in her class for behaving as any normal child would. Forgotten by the teacher, she managed to make her way off of school grounds and onto a freeway bridge, struggling with thoughts of suicide and believing that no one would miss her. She was wrong, as her family found her after receiving a call from the school hours after the 7-year-old was missing from campus. Samaya’s story was just one of many shown in the film, showcasing that Black girls are disproportionately being pushed out of the school system via expulsion and numerous detention sessions leading to removal, or truancy.

After the screening, a panel discussion took place, moderated by Lincoln High student and co-organizer/chair of the Youth Council, Precious Letchaw. Panelists also included Licensed Therapist Shanell Johnson, Horton Elementary School Principal Stacy Dent, and Dr. Elizabeth Stanton. The women answered questions on how they were showing up for Black girls and women in their communities, advocating for them in school and in the real world. Johnson, a former Navy servicewoman, affirmed that “mentorship is crucial” to helping to reach back to young girls who could use the support system.

Principal Dent agreed, doing so in her role as an educator. “Relationships students have with their teachers is incredibly important,” Dent said, mentioning that she is the “mother” of a select few of her students, and that support is invaluable. “Everyone’s experiences are valid,” she continued. She also pointed out how “students bring with them very valuable experiences” and that, through those challenges, they’re able to “turn pain into purpose.”

Adding some of her own insights, Dr. Stanton professed that she “was out-of-pocket as a student” but she had leadership that set her back on the path she needed to be on when she was a youth. In her career now, Stanton does the same for Black girls.

Film showings and panel discussions are being held across the nation, spreading the word that Black girls are not a monolith, that they deserve to be seen and heard, and that their right to receive an education and fair treatment is just as important and necessary as it is for everyone else.