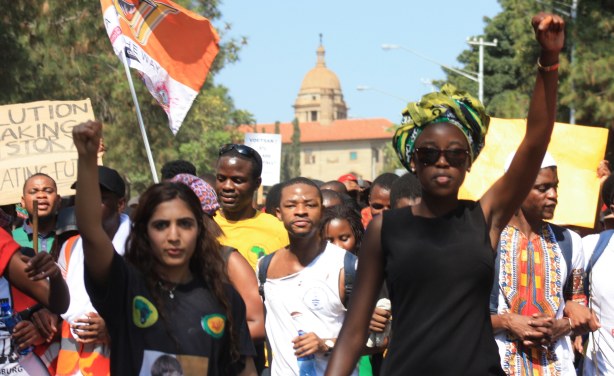 Fees Must Fall protesters in Tshwane have vowed to go ahead with their march to the Union Buildings despite not having permission to do so on Thursday.

The growing group of about a 100 students and workers gathered in Church Square singing struggle songs as they waited for others to arrive.

One of the conveners of the march, Mametlwe Sebei, accused the government of acting in bad faith by not granting the group permission to march in the CBD.

He said they had informed the metro police that they expected a group of about 500 people to join them on Thursday. However, they could not guarantee that the number would not increase due to word of mouth or social media.

Metlwe also insisted the march would be a peaceful demonstration, contrary to what police suspected.

“We intend to conduct this march on a disciplined basis, but what the police do today is solely on them.

“We have every intention to make sure we don’t damage any property, but we are going to the Union Buildings to demand free higher education.

Case to be opened against marchers

“There is no way out of a genuine and legitimate demand for free education for the poor and working class. Government has to respond.

“To the Union Buildings we are going,” Metlwe said.

Earlier Tshwane Metro police spokesperson Senior Superintendent Isaac Mahamba said the group had not been granted permission to march and that the march would be considered illegal.

If students marched despite this a case would be opened.

He would not clarify whether officers would make any operational decisions on the ground.

The march was expected to begin at 08:00 but was delayed as students from other campuses were yet to be bused into town.