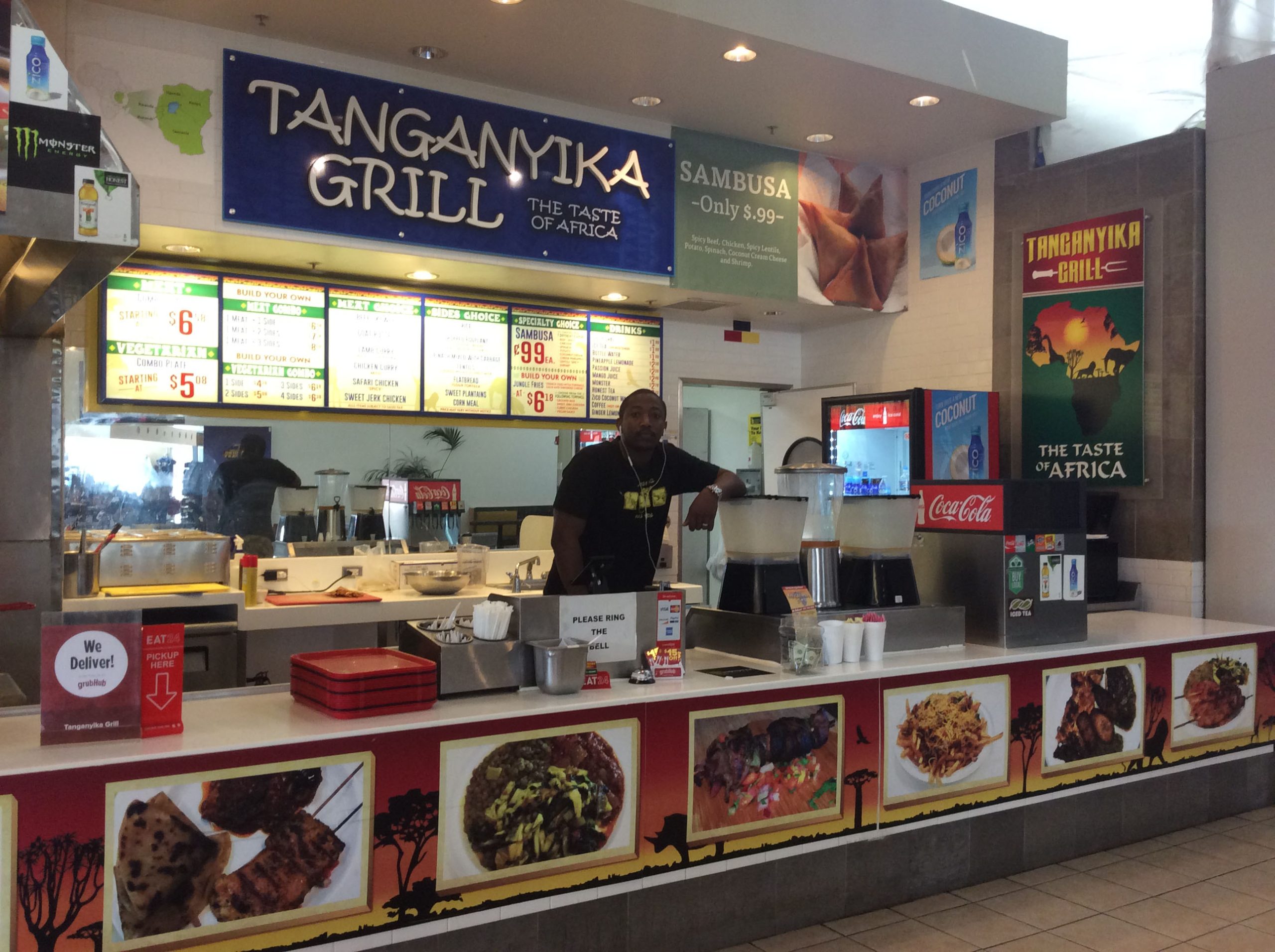 By Edward Henderson
What is the first thing that comes to mind when you think of African cuisine? Perhaps there is an assumption of spice or an unfamiliarity with the cooking style in general. Bruce Nishimwe, owner of Tanganyika Grill in Westfield Mission Valley Mall food court, wants to broaden the horizons and pallets of his customers to shift the conversation surrounding the food from his native continent.

Cooking Takes Flight
Nishimwe, 38, hails from Burundi, a country bordering Rwanda and Tanzania. He arrived in the San Diego at the age of 27 to attend aviation school and found a job at Denny’s to support himself while taking classes. Over time, however, Nishimwe developed a passion for cooking, excelled in the company and eventually garnered the title of general manager.
“Nobody knows their destiny, so I was surprised when I got started in the restaurant business,” said Nishimwe.
After connecting with management from local Ethiopian restaurant ‘Flavors of East Africa’ Nishimwe began cooking in their kitchen and learning the finer details of African cuisine.
“After working with them it was much easier to apply and remember what I’ve seen from back at home,” said Nishimwe.
The young chef honed his talent for a year with Flavors of East Africa before deciding it was time to branch of on his own and create an opportunity most African restaurants don’t get.
Tanganyika is Born
In 2014, Nishimwe capitalized on an opening in Westfield Mission Valley Mall’s food court and created Tanganyika Grill. Tanganyika is a lake which flows between the boarders of Burundi, Tanzania and the Congo and houses some of the largest crocodile in the world. Nishimwe used to swim in those waters for fun as a child.
“I wanted a name that was exotic because this food is different,” said Nishimwe. “If you look around (the mall) there’s going to be American food, Mexican food and Asian food. You never see African or African American food. I’m trying to bring that diversity.”
Tanganyika Grill’s menu features goat, lamb, African jerk chicken as well as a variety of vegetarian and vegan options. They also have a delivery service and online ordering. Nishimwe made the conscious decision to feature these items with the growing trend of healthy eating sweeping the nation.
“If I know that I’m making heathy food for people to eat, that’s a gift right there,” said Nishimwe. “I like the fact that I can be an extension of how people live their lives and change the way they eat.”
Unlike many of the other tenants in the food court, all meals at Tanganyika Grill are cooked to order. This gives customers the opportunity to view the preparation process and guarantee the freshness of their food.

Challenges
Nishimwe’s journey hasn’t come without his share of challenges. With steep prices for advertising and continued stigma towards African cuisine, raising awareness about Tanganyika Grill and producing new customers has been a difficult task. He’s recounted several occasions where people would stop by the location, see the African concept and quickly turn away.
“It’s a small amount of people who will try food that they don’t know about,” said Nishimwe.
To combat these challenges, Nishimwe often serves as a vender at non-profit events and festivals to reach out to the community. He also plans to create classes to educate people on healthy eating and the benefits of African cuisine.
“If you want to start attracting more people then you have to share your recipes,” said Nishimwe. “If you hide, people won’t know. If people don’t know, then they don’t come.”
With a focus on flavor and attention to detail, diving into Tanganyika Grill will prove to be a refreshing and satisfying experience.
To see the full menu for Tanganyika Grill, visit tanganyikagrill.us