Home Arts and Entertainment ‘THE AMERICAN AUDIT’ exposes America as a 400-year old business and its... 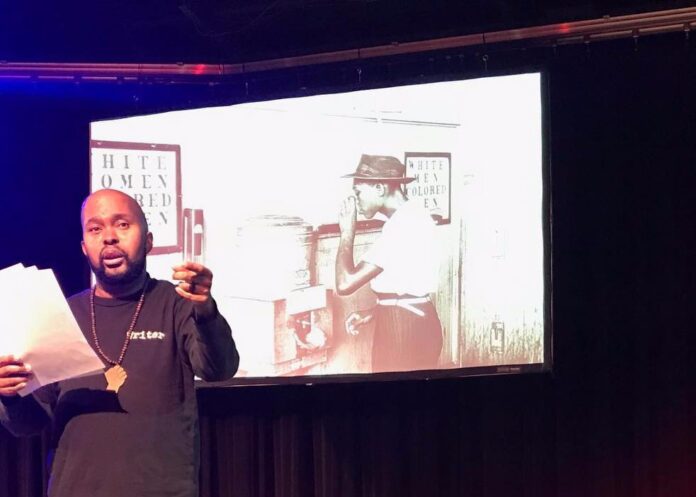 By Candice Semien, The DRUM Newspaper

Baton Rouge spoken-word artist and activist Donney Rose has amassed more than 2,000 travel miles conducting hours of interviews and days of research in order to create an epic narrative that unravels 400 years of American History.

It is an ambitious presentation called “The America Audit” where Rose explores America as a business and exposes its toll on Black citizens fiscally, spiritually, judicially, emotionally, and socially.

To do so, Kennedy Center Citizen Artist Fellow committed up to 15 hours a week for a year to complete this “audit.”

“I am going all in,” Rose said, “The poem is one epic poem broken into nine different parts which all begin with a technical term used in an audit.”

Last year, he performed excerpts of The American Audit at the 2019 Arts Summit of the John F. Kennedy Center for the Performing Arts, the University of Northern Iowa, and Festival of Words in Grand Coteau.

The Jozef Syndicate asked Rose to share more on The American Audit which will showcase 7pm on Feb 28 at the Manship Theatre in Baton Rouge.

JS: American Audit is described as a multimedia, spoken word project that chronicles 400 years of Black American life using the extended metaphor of America as a business audited by African Americans (today). How else do you describe it to others?

ROSE: This has been my general explanation but I additionally add that it’s not just an exploration of financial/fiscal aspects of Black labor and humanity being audited, it’s also an exploration of the social, emotional, physical and psychological toll of the African-American experience and what findings come up when doing a deep dive into all of those layers

JS: How did you decide on this topic and why multimedia?

ROSE: In late 2018, I began thinking about the pending 400-year anniversary of the first documented enslaved Africans being brought to Jamestown. I knew that there would be several writings, discussions etc. about this historical milestone and wanted to find an artistic lens to approach it. Seeing that enslaved Africans were brought to this land under the guise of economics, I figured what better way to approach the topic than by writing about a fictional audit being done. The multimedia aspect of it was to expand my presentation. After 20 years of performing poetry, I didn’t want to just get behind a mic and perform this content. I wanted to do a deeper dive that would allow me to talk to history and cultural experts and display those discussions interwoven with the performative text.

JS: Why this topic now?

ROSE: The plan was to have the project finished for 2019 to be in accordance with the commemorative year. There were a few setbacks that did not allow that to manifest, but I knew there would still be relevance going into this year. I have previewed excerpts of the project in various settings and the consensus is that is timely and very relevant to the times we are in.

JS: Is this a stand-alone project of Donney Rose or connected to Black Out Loud?

ROSE: The project is a stand-alone, however, components of it are likely to be incorporated in future Black Out Loud programming.

JS: How did you know you wanted to do this work?

ROSE: What I really knew was that I wanted to push my artistry beyond the confines I had set for myself. Over the last few years, I have become a much more avid reader and cultural observer of politics and social behavior and how we, as Black Americans, respond to structural and systemic facets of our lives that were created beyond our control.

JS: Before performing your poem “New Definitions,” you said a continuum of one conversation of Blackness is vital and necessary. What is that conversation and does this project contribute to it?

ROSE: I believe that the continuum of the conversation referenced is a continual deep dive into our humanity. So much of Black oppression has been rooted in dehumanization. Which is to say if you can convince African Americans that somehow their existence is less than, you can continue to marginalize them is a variety of ways. The American Audit absolutely gets to the root of dehumanization and explores the why and how.

JS: What was the most interesting place (physically) that this project has taken you? How would you describe it?

ROSE: Very early I visited the Whitney Plantation and that was a fascinating visit because of our tour guide. It was interesting to see just how vital sugar cane was to the area, because typically when we think slave labor we default to the idea of cotton being picked. I would say one of the other more interesting places I visited was the Federal Reserve of Philadelphia. It’s an interesting museum that details the how and why of currency production. There weren’t explicit displays about slavery there but it was easy to connect certain dots when you saw information about the origins of American currency.

JS: What was the most provocative discovery you made? How is it presented in the project?

ROSE: Some of the most striking imagery comes by way of two visits to the Smithsonian National Museum of African American History and Culture in Washington DC. It’s such a visually stunning museum to visit and it allowed me to gain access to gripping images I would not have gotten anywhere else. The writing, in general, is pretty provocative as I am more or less trying to make a case for America as a metaphorical business to undergo an audit for its treatment of Black people.

JS: Have you experienced frustration in creating this project? How do you work through the harder parts?

ROSE: I have had moments in which I have wondered if I am being complete and exact in the writing, but I’ve had to understand that this one project will not be the answer to generations of inequity or dehumanization. That there will always be interrogations of this country by various people who are curious or bold enough to question it for what it is.

JS: Who’s helped produce this and to what capacity?

ROSE: My main co-creator is Steven Baham. He is doing videography work filming all the interviews and assisting with storyboarding/editing the final product. Leslie Rose has also been instrumental in doing photography work for a lion share of the images.

JS: Is there a call to action with this work?

ROSE: There’s not necessarily a ‘call to action’ per se. The project is mostly a creative analysis of what this nation has been to and for Black people. Framed through the lens of economics because money, finance, and wealth are universal in the sense that this country consists of people who either have it or who are striving for prosperity.

JS: Where does The American Audit go from here?

ROSE: Hopefully the performance goes to other parts of the country. After the February 28th debut, a few more interviews will be conducted, ideally with scholars, experts, and activists out of state.

JS: Audre Lorde wrote, “We must wake up knowing we have work to do and go to bed knowing we’ve done it.” With the work you’ve desired for the American Audit, do you get to point of being “done”?

ROSE: For this particular project, yes.