Home Arts and Entertainment THE BLERD BINDER: Watchmen Is a Testament to Trauma 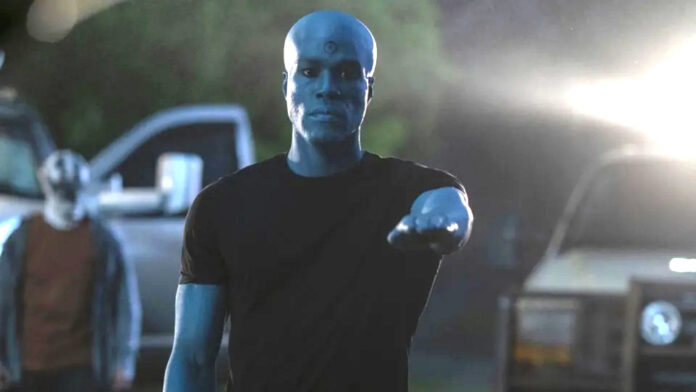 Episode six of Watchmen (titled “This Extraordinary being”), depicts vital moments in Black culture, trauma, or experiencing trauma. Episode seven delves into how we handle trauma. Episode nine goes over the story of why Dr. Manhattan after his self-imposed exile on Mars. These episodes came with big reveals in them as well as expanding the lore of Alan Moore’s original graphic novel.

The Blerd Binder covers nerdy news for the Black nerds of the world. We welcome all as we talk about subjects ranging from Movies to Music and Tech to Toys.

(Check out Noah Washington’s previous articles on “Watchmen” and other topics in Black Nerdom. NOTE: If you haven’t seen Watchmen, there are spoilers ahead for what has happened in the series so far through episode 8. You have been warned).

Episode six, seven, and eight of “Watchmen” are what I consider to be some of the best hours of television in history.

Episode six of Watchmen (titled “This Extraordinary being”), depicts vital moments in Black culture, trauma, or experiencing trauma. Episode seven delves into how we handle trauma. Episode nine goes over the story of why Dr. Manhattan after his self-imposed exile on Mars. These episodes came with big reveals in them as well as expanding the lore of Alan Moore’s original graphic novel.

Episode six opens with Angela haven taken her Grandfather Will’s “Nostalgia” pills. This then takes her through a cascade of his memories, which begin with him becoming a police officer in 1930’s New York, being inducted by a fellow black police officer who warns him off an organization called “Cyclops” (more on that later).

Police Officer Will arrests a white man for burning down a Jewish Deli. The screenwriters inserted a subtle irony as we see a white vendor reading a Superman comic — Superman was created by two Jewish men.

When Will brings the man in to the station, the front desk officer meets him with hostility, but then there is a glimmer of hope when a white cop stands up for him and takes him in, only for that hope to be diminished as the same perp is back on the streets the very next day.

After a series of events during which we see the same cops who stood up for Will, heartbreakingly dragging two African Americans through the streets, nearly lynching Will, we witness his transformation into the original vigilante: Hooded Justice, who had initially perceived as a white man.

Later in the episode, Captain Metropolis asks Will to reach out to Hooded Justice, who he thinks is a white man that Will has been feeding information to.

In the very next scene, Will and Metropolis are engaging in sexual intercourse.

Metropolis then proceeds to tell Will not to take off his mask when he is with the other members of the Minutemen because they are racist and need to be bankrolled by racist banks — leading back to that famous quote, “Who Watches the Watchmen?”

Will then discovers a plot by the group Cyclops (who turn out to be the Cops that Will conflicted with) to use screens as mediums for hypnotism, but the Minutemen refuse to come to his aid.

Will then kills all of the members of Cyclops and, ironically, strangling the leader who had threatened to lynch Will with a wire. After a scene of Will coming home to see the trauma that he has brought to his family, there is a time jump forward to Will confronting Jud, the chief of police (on the night of his murder), using the Cyclops’ hypnotic technology to have Jud hang himself, thus ending the episode.

The writers were able to do something truly amazing: They did not change anything at all.

With sequels or reboots, something is usually modified from the source material, either making things completely different from the original story, or to add context to new material that was not in the original. But Watchmen screenwriters were able to take pre-existing lore and not change any of the original Alan Moore comics.

They gave meaning and depth to the Minutemen, who were just a plot device for Alan Moore, using the source material and creativity to turn that plot device into a complicated origin story.

Will interchanges with Angela throughout the episode. Could this be the writers commenting on genetic memory? Genetic memory refers to the phenomena that comes about when someone has endured conditions so traumatic that the memory is passed on to the victim’s descendants. We see that Angela is literally experiencing Will’s Trauma.

We then see her parents were killed by a Vietnamese terrorist, leading her to wake up in Lady Trieu’s recovery room, treating her overdose.

Throughout this episode, we see Angela go through glimpses of Will’s memories only to go into her memories, linking her trauma to his (that genetic trauma I was talking about).

In this episode, we also learn that Adrian Veidt’s timeline is completely different from the main storyline as a whole year has passed since the last time we saw him. Still, the real surprise happens when we discover that Dr. Manhattan is in Tulsa walking around like an average person, and to makes matters even crazier, the Seventh Cavalry plans on killing him to allow Senator Joe Keene to take his power!

In fairness, the writers have been dropping clues, such as Cal’s religious worldview, his accident, the allusions to Dr. Manhattan’s infamous genitalia, and the dialogue from Will saying that Dr. Manhattan can make himself look like anything with any color.

Dr. Manhattan is pretty notable for moving from woman to woman, but the questions remain: Why would he want to make himself a black man? How does Adrian Veidt’s storyline fit into the show as a whole? And How is Lady Trieu’s clock going to save the world?

How he also ended up on Europa, a moon of Jupiter, is almost heartbreakingly funny. Adrian wanted Dr. Manhattan to transport him to a place where he would be continuously worshipped but Europa turned out to be the exact opposite. This leads me to think about a little saying, “Be careful what you wish for, you just might get it.”

I’m sure these questions will be answered in the next episode as we are nearing the end of this season. This show has consistently been putting me on the edge of my seat, so I can’t wait to see how these storylines come together.

I hope that the world will watch this television spectacle and like it. Who knows how it will all play out? I can’t wait to get into the finale.