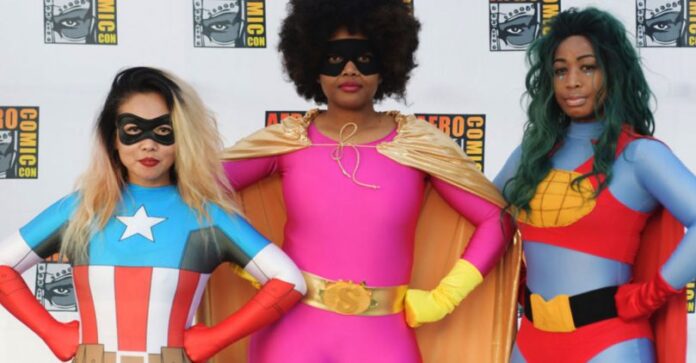 Black Nerds of the World, This Con’s for You!

If you’re a Blerd (Black nerd) that’s been living in Oakland, California for the past few years, your living space would have to be located under a rock for you to have not heard of the area’s seminal annual event for Black nerds: AfroComicCon (www.afrocomiccon.org).

The annual con, which was co-founded by Michael James and Hally Bellah-Guther, explores themes that go far beyond comics to include music, film, science, technology, gaming and writing.

“2020 has been a long strange journey for everyone. As a live event organizer, the learning curve was steep and our community has suffered but will not be deterred, which is why we made it happen virtually,” said AfroComicCon Co-Founder Hally Bellah-Guther.

As a result of the pandemic, planning for this year’s AfroComicCon event was shifted away from a physical space to the virtual space — which turned out to be a good thing! The change in venue not only meant that more people could attend and share in the experience, but it also enabled organizers and planners to engage a wider array of participants (nobody had to leave the comfort of their home).

Another tremendous advantage that online cons present is that the content, once it’s made available, remains accessible forever — or as long as it’s owners consent to do so.

With approximately 60 panels and a film festival that viewers were able to engage with across a number of channels and platforms, there is more content to see than a typical visitor can consumer in one day.

While the primary preferred destination for visitors is the AfroComicCon website at afrocomiccon.org, a partnership with the National Newspaper Publishers Association (NNPA) meant that content can also be accessed via the NNPA’s BlackPressUSA’s YouTube page (BlackPressUSA TV) and on the YouTube and Instagram pages of AfroComicCon.

With so much to offer to visitors, AfroComicCon panels are organized according to one or more of eight categories: Writing, Gaming, Comic Book, Animation, FLASH (fit like a superhero) Hollywood Production, Social Justice and Special Sessions.

It’s all good stuff but if you’re like The Blerdbinder and appreciate helpful hints to point you in the direction of AfroComicCon gold, fear not fellow traveler. The panels are all pre-recorded sessions. So, if you need to pause something you’re watching, you can do so and resume from where you left off.

Start with these standouts:

“Entrepreneurial Journey into Animation, Advertising, Design, And Tech” — The motivation, the ways and the means to get there may be varied but is there a set of prerequisites to make it in the world of high tech and creative design?

“The First Steps of Visual Storytelling – Storyboarding is the Foundation Of Animation” — The Copeland Brothers, film and game industry superstars, share some of their insights — and tales of their lives and times — as storyboard artists. Find out how two brothers who loved to draw became directors of Marvel and DC animated films and are now directors at DreamWorks. At the same time, learn the basics of storyboarding!

“Producers of TV and Film” — Four Giants of Film and TV help us understand the routines of writers, producers, and managers on projects as varied as Spike Lee masterpieces, The Boondocks to Heroes and The Jamie Fox Show.

“The Road from A-Z. Becoming a Successful Tv Writer in Today’s Crowded Landscape” — Join professional writers Liz Benjamin, Bianca Sams, Mercedes Valle, Maya Houston and Kate McCarthy for a fun and frank conversation about what it really takes to survive and thrive in the high-stakes world of Film and Television. How they got in. How they stayed in. How they’re building bridges for lasting success.

“Pursuing the dream: Stage, TV and Film, the life of Actors, Writers and Producers” — A panel discussion featuring film and TV actors who have enjoyed long and successful careers in LA and NYC

“One on One with Godfrey” — Stand-up comedian and actor, Jay Washington sits and talks with fellow comedian actor and iconic personality Godfrey Danchimah.

Among the panels not listed above: The legacy of Chadwick Boseman; Special guest celebrity Blerds like Sinbad (in one of his last publicly recorded sessions before his tragic stroke last month), Godfrey, Miles Brown and Diallo Riddle (creator of HBO Max’s “SouthSide” and AMC’s “Sherman’s Showcase”).

The 2020 AfroComicCon Virtual Short Film Festival, which was sponsored by the NNPA, The BurtonWire, and Pixar, was hosted by Dr. Nsenga Burton. This year’s festival, which was also virtual, showcased monumental achievement in film by upcoming and veteran filmmakers.

The Festival’s winning selections are:

Best Film and Cinematography: “Far From Casablanca” by Youssef Rhanem (1st place) and “The Dark Strums” by Steven Russel (2nd place)
The Audience Award Winner: “What Could Have Been” by Semmi Cole:
Best Film and Best Director: “Outcast” by Royce Adkins

There was also an awesome cosplay contest! The winners’ Instagram handles:

AfroComicCon is a non-profit event that not only provides amazing content, entertainment and fun, but also raises funds for programs like its Moonshot Junior Collaboration for leveling young girls of color up in a 12-month innovation program.

The Blerd Binder covers nerdy news for the Black nerds of the world. We welcome you to take the journey with us as we talk about subjects ranging from movies to music to tech to toys.