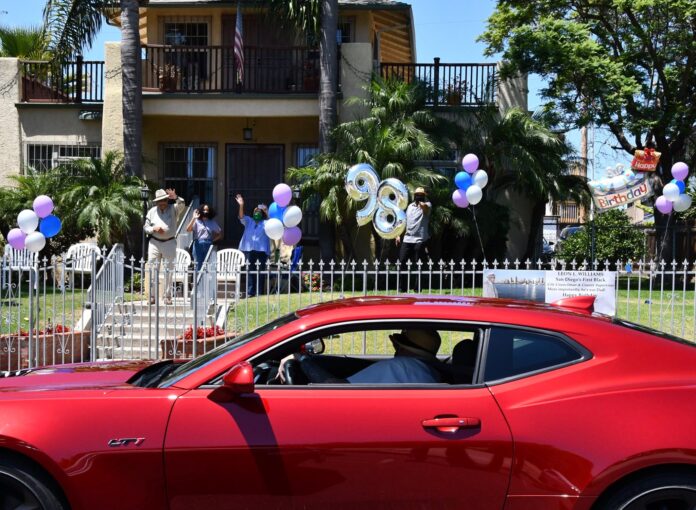 Community, family and friends came together last Saturday in a surprise celebration of beloved former County Supervisor Leon L. Williams’ ninety-eighth birthday. Practicing COVID-19 safety guidelines and social distancing, nearly 30 people drove-by the Williams’ residence with messages of love and appreciation for the 37 years this pioneering political and civic leader helped make the city and county of San Diego a better place for all to work, live, and play. Countless others sent electronic notes filled with well wishes that were later shared with the county’s first, and so far only, African American county supervisor.
Williams, known for his inclusive policies and for championing downtown revitalization, transit improvements and creation of the county Public Defender’s Office, became San Diego’s first African American City Councilman and County Supervisor in 1969 and 1982, respectively. He served on the Board of Directors of the Metropolitan Transit System (MTS) until his retirement in 2006. In 2017, the 3000 block of E Street, where Williams was the first African American to purchase a home in 1947, was renamed Leon Williams Drive in his honor. As further testament to Williams’ impact, in the wake of recent George Floyd protests and COVID-19 tensions, in May 2020 the Board of Supervisors revived the previously dissolved Human Relations Commission that Williams originally established decades ago to promote diversity, tolerance and human rights.

On Saturday, the community’s celebration of Leon William’s birth was an affair to remember.