Home National The ‘Conscience of the Congress’, U. S. Rep. John Lewis, Dies at... 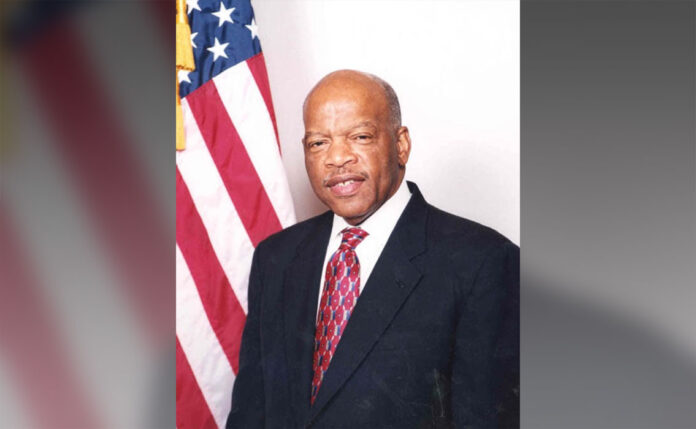 (TriceEdneyWire.com) – He was the son of a sharecropper who came to be known as the “conscience of the Congress” and has been described by a list of other heroic terms: From the Rev. Jesse Jackson, who called him the “founding father of American Democracy” to President Barack Obama’s description saying Congressman John Lewis’ “life is a lesson in the fierce urgency of now.”

Even President Donald Trump, whose inauguration was skipped in protest by the Congressman who also voted for Trump’s impeachment, has expressed “respect for the memory and longstanding public service of Representative John Lewis, of Georgia” as he ordered all U. S. flags to be flown at half-mast in his honor.

Perhaps best known in his final years as one who engaged in “good trouble, necessary trouble” – his best description of himself – Lewis died of pancreatic cancer July 17. He was 80. Civil rights leaders, dignitaries, his constituents and the millions of lives he touched poured out their memories and paid their respects this week.

“Although there were times when the movement left John, John never left the movement,” said fellow Congressman James Clyburn (D-S.C.), Democratic majority whip, who worked with Lewis in the struggle for 27 years. “John continued his quest for equality right up to the bitter end. Just last month, he visited the Black Lives Matter plaza in Washington D.C., as if to pass the torch. He and I had talked about the current iteration of the movement — its intensity, its diversity.  We felt that a sustaining movement for ‘liberty and justice for all’ had finally arrived.”

And that’s how he wanted to be remembered – for the impact that his leadership for racial justice had on America and the world – both Black and White.

“The United States and the world have lost one of the great public leaders of our time…I and everyone who cares about and works for justice will miss him,” said Douglas W. Elmendorf, dean of the Harvard University John F. Kennedy School of Government.

“Representative Lewis fought his entire life for civil rights and against anti-Black racism. He fought with stirring moral clarity: He stressed that all people deserve freedom and justice, and for 60 years, he spoke out again and again when people in this country and others were denied their basic human rights. He fought with remarkable personal courage: He was repeatedly beaten, harassed, arrested, jailed, and attacked, but he kept seeking ways to make a difference through ‘good trouble, necessary trouble,’ as he called it.”

Although he was the youngest to speak at the March on Washington, August 28, 1963, Lewis is perhaps best known for his leadership on “Bloody Sunday”, March 7, 1965. That was the day when Georgia state troopers brutally assaulted him and others as the Student Nonviolent Coordinating Committee (SNCC), which he chaired, crossed the Edmund Pettus Bridge, marching from Selma to Montgomery.

That moment, widely televised, led to the passage of the Voting Rights Act the same year after President Lyndon B. Johnson – touch by the violence – borrowed from the words of the civil rights anthem, “We Shall Overcome.”

The following are excerpts from his congressional web page bio:

Often called “one of the most courageous persons the Civil Rights Movement ever produced,” John Lewis has dedicated his life to protecting human rights, securing civil liberties, and building what he calls “The Beloved Community” in America.   His dedication to the highest ethical standards and moral principles has won him the admiration of many of his colleagues on both sides of the aisle in the United States Congress.

He was born the son of sharecroppers on February 21, 1940, outside of Troy, Alabama.  He grew up on his family’s farm and attended segregated public schools in Pike County, Alabama.  As a young boy, he was inspired by the activism surrounding the Montgomery Bus Boycott and the words of the Rev. Martin Luther King Jr., which he heard on radio broadcasts.  In those pivotal moments, he made a decision to become a part of the Civil Rights Movement. Ever since then, he has remained at the vanguard of progressive social movements and the human rights struggle in the United States.

As a student at Fisk University, John Lewis organized sit-in demonstrations at segregated lunch counters in Nashville, Tennessee.  In 1961, he volunteered to participate in the Freedom Rides, which challenged segregation at interstate bus terminals across the South. Lewis risked his life on those Rides many times by simply sitting in seats reserved for white patrons.  He was also beaten severely by angry mobs and arrested by police for challenging the injustice of Jim Crow segregation in the South.

During the height of the Movement, from 1963 to 1966, Lewis was named Chairman of the Student Nonviolent Coordinating Committee (SNCC), which he helped form. SNCC was largely responsible for organizing student activism in the Movement, including sit-ins and other activities.

While still a young man, John Lewis became a nationally recognized leader. By 1963, he was dubbed one of the Big Six leaders of the Civil Rights Movement. At the age of 23, he was an architect of and a keynote speaker at the historic March on Washington in August 1963.

In 1964, John Lewis coordinated SNCC efforts to organize voter registration drives and community action programs during the Mississippi Freedom Summer. The following year, Lewis helped spearhead one of the most seminal moments of the Civil Rights Movement.   Hosea Williams, another notable Civil Rights leader, and John Lewis led over 600 peaceful, orderly protestors across the Edmund Pettus Bridge in Selma, Alabama on March 7, 1965.  They intended to march from Selma to Montgomery to demonstrate the need for voting rights in the state.  The marchers were attacked by Alabama state troopers in a brutal confrontation that became known as “Bloody Sunday.”   News broadcasts and photographs revealing the senseless cruelty of the segregated South helped hasten the passage of the Voting Rights Act of 1965.

Despite more than 40 arrests, physical attacks and serious injuries, John Lewis remained a devoted advocate of the philosophy of nonviolence. After leaving SNCC in 1966, he continued his commitment to the Civil Rights Movement as Associate Director of the Field Foundation and his participation in the Southern Regional Council’s voter registration programs. Lewis went on to become the Director of the Voter Education Project (VEP). Under his leadership, the VEP transformed the nation’s political climate by adding nearly four million minorities to the voter rolls.

In 1981, he was elected to the Atlanta City Council. While serving on the Council, he was an advocate for ethics in government and neighborhood preservation. He was elected to Congress in November 1986 and has served as U.S. Representative of Georgia’s Fifth Congressional District since then. He is Senior Chief Deputy Whip for the Democratic Party in leadership in the House, a member of the House Ways & Means Committee, and Chairman of its Subcommittee on Oversight.

His biography, published in 1998, is entitled Walking With The Wind: A Memoir of the Movement. He is survived by one son, John Miles.