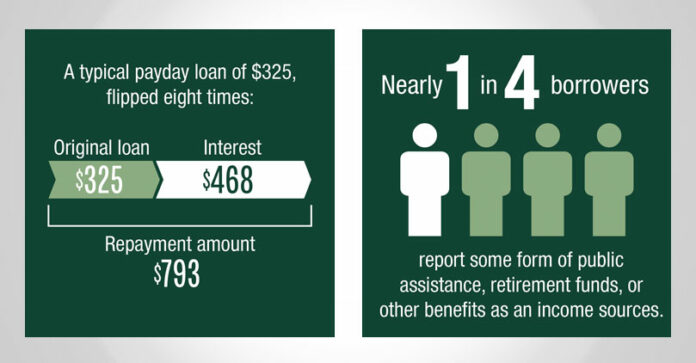 A Capitol Hill Fight Between the Needy and the Greedy

At an April 30 Capitol Hill hearing, the multi-dimensional problems wrought by small-dollar, high-cost loans were brought to the attention of lawmakers serving on the powerful House Financial Services Committee. A witness panel representing bankers, consumers, clergy, and public policy organizations taught, recounted, reasoned and preached to lawmakers on the rippling and disastrous effects of debt-trap loans.

Each addressed the industry that reaps billion-dollar profits from the poor: payday, car-title, and other triple-digit interest small-dollar products. The average annual interest rate for payday loans in the United States is 391% although in more than 17 states, many of them home to consumers of color, the APR is even higher.

As consumers suffer financially, it’s a different story for payday lenders: $4.1 billion in fees every year in the 33 states that allow these debt traps, according to the Center for Responsible Lending (CRL). Similarly the annual fees generated on car-title loans was found to be $3.8 billion.

The session occurred as the current Administration seeks to permanently reverse a payday rule that was developed over five years of public hearings, research and comments that sought the input of consumers, financial institutions and other stakeholders. Announced by the first   Consumer Financial Protection Bureau (CFPB) Director, the rule would require lenders to determine if a consumer could repay the loan, also known as the ability-to-repay standard.

With a new CFPB Director, the rule’s suspension was accompanied by an announcement of an intent to begin rulemaking anew. For the industry, the suspension provides yet another opportunity to take the teeth out of financial regulation.  For consumers, long-awaited consumer protection that would have taken effect this summer is now indefinite.

With the average borrower earning $25,000 to $30,000 a year, whatever difficulty led them to a payday loan store or web site, made their lives even worse.

For Detroit resident Ken Whittaker, the hearing was a high-profile opportunity to share his personal experience with a $700 payday loan that wound up costing him $7,000, in addition to debt collections, a court judgment, and his tax refund garnished.

“I found I could not afford to pay off the first loan without taking out another one. Then I began a cycle of debt which lasted over a year,” testified Whittaker. “Soon I was paying $600 per month in fees and interest. I eventually closed my bank account to stop payments from being drawn out and leaving me without cash for my family’s rent, groceries and other essential bills.”

In the hearing’s most poignant moment, Whittaker appealed to the lawmakers saying, “Please support strong reform of predatory payday and car title lending for people like me. We work hard to support our families and make our finances stable, and this kind of lending only makes it harder.”

“Any universe with payday lending is answering the question of how to make poverty a sustainable profitable enterprise,” noted Rep. Pressley. “Well a lot of people are getting rich off of keeping poor people. And so how do we reform anything that’s based on that premise? The short answer is, we don’t.”

Todd McDonald, Senior Vice President and Board Director of the New Orleans-based Liberty Bank and Trust, a Community Development Financial Institution (CDFI) spoke at the hearing from the perspective of community banks. His own firm operates in eight states through 15 branches. He is also a board member of the National Bankers Association, the leading trade association for the nation’s Minority Depository Institutions.

“As a CDFI that serves a largely low and moderate-income consumer base that often utilizes these high-cost, small dollar loans,” testified McDonald, “Liberty often works to help our customers get out of these predatory loans and into more manageable products.”

Since 2008, Liberty Bank has offered a payday and car-title loan alternative known as Freedom Fast loans that averages just over $6,000 and comes with an average interest rate of 12.6%. Liberty provides these loans to customers with credit scores ranging from a low of 500 to higher than 700. It also reports payments to the credit bureaus so that customers can also build their credit ratings.

For the Rev. Dr. Frederick Douglass Haynes III, senior pastor of Dallas’ Friendship West Baptist Church and a leading partner in the Faith and Credit Roundtable facilitated by the Center for Responsible Lending, predatory lending is a matter of economic justice that deserves actions and not just hearings.

“Payday predators are a part of a hostile takeover of the economy of the unbanked and underserved. This exploitative industry targets and saturates communities that are already suffering from economic apartheid,” said Rev. Haynes to the lawmakers. “When the vulnerable are drowning in desperation the payday industry throws a ‘life preserver’ weighted with the iron of usurious interest rates.”

“We are calling for strong protections so that those who experience an emergency don’t end up drowning in debt they cannot repay,” added Rev. Haynes.” The pastor forcefully called for the CFPB to implement its “common sense rule” and for enacting legislation, like a bill introduced by Illinois’ Senator Richard Durbin, that would establish a national 36% interest rate cap while allowing states to have lower rate ceilings.

A Black Beekeeper in Phoenix and her Baehive Sisterhood